We’re creating how each nation could line-up ahead of the World Cup, in collaboration with He Can Play For. This week, it’s Tonga!

In these weekly feature pieces, we are selecting our predicted side who can represent Tonga. This can include players born in that country, with heritage to the nation or even residency.

How Tonga could line-up at the Rugby League World Cup: 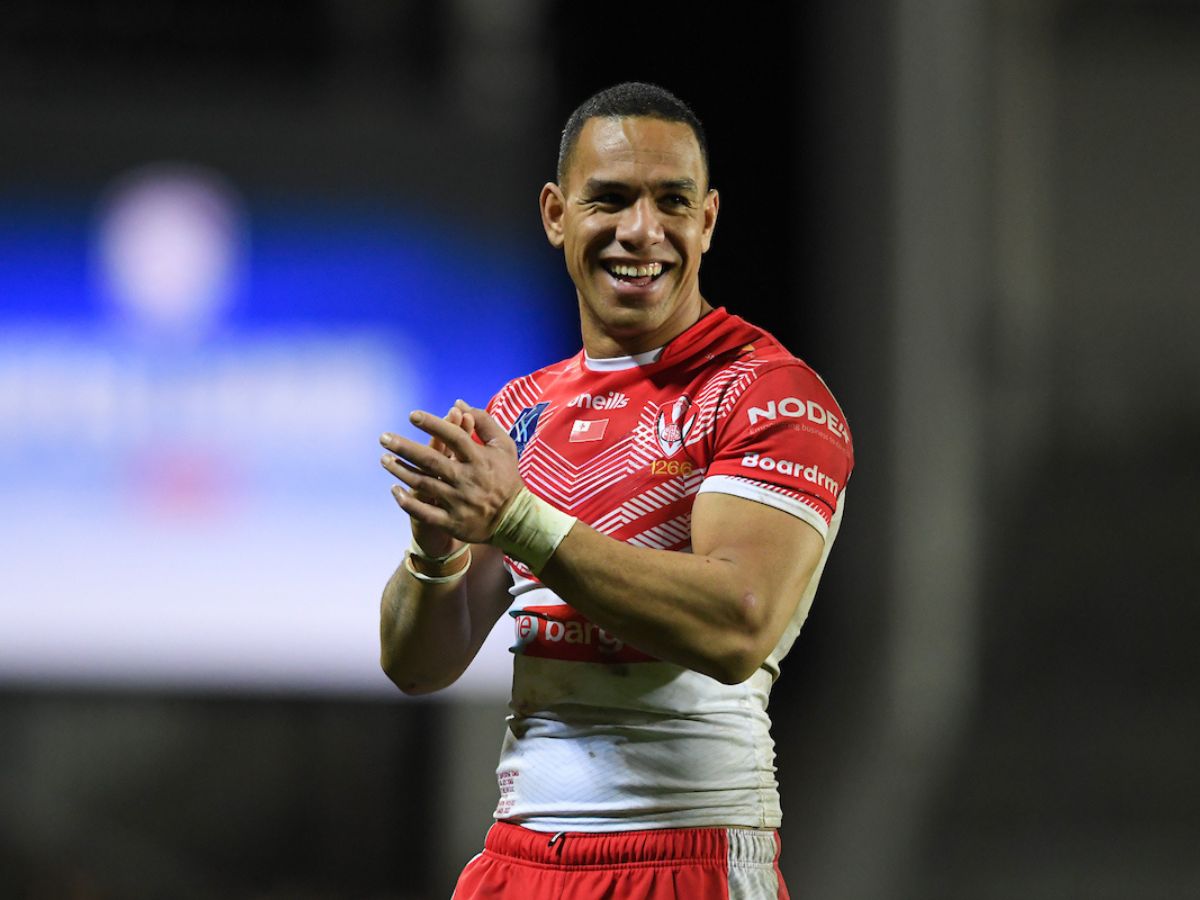 Hopoate has struggled with injuries in his first season in Super League with champions St Helens, being limited to 10 appearances thus far.

But he has shown exactly how good of a player he is when he has been able to get on the field. The 30-year-old has won 11 caps for Tonga and will bring a wealth of experience to Kristian Woolf’s side again at the end of the year, with more than 200 career appearances under his belt. 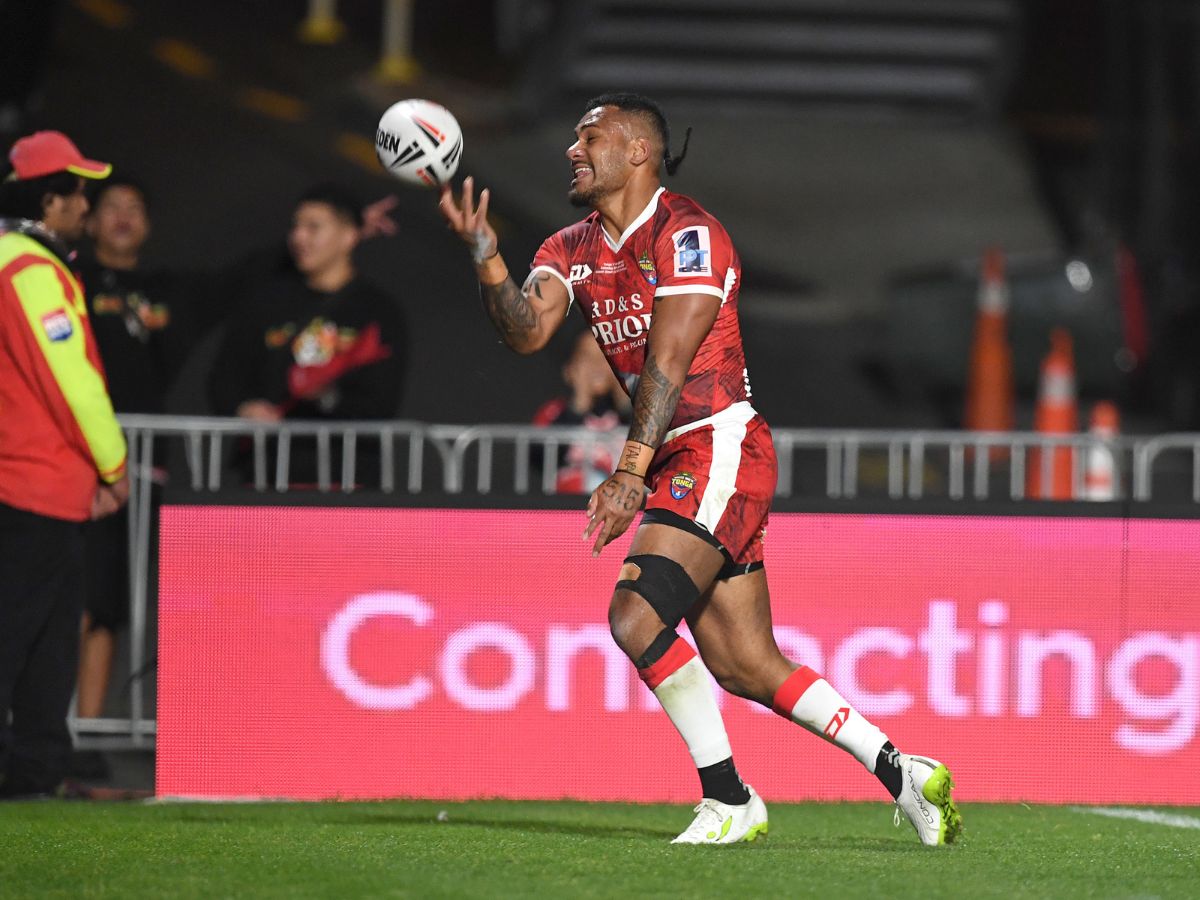 Katoa is one of the most prolific wingers in the NRL right now. He has scored 46 tries in 64 games for Cronulla Sharks so far.

The 24-year-old represented his Tongan heritage at the Nines World Cup in 2019 before making his senior debut in their mid-season defeat to New Zealand earlier this year. 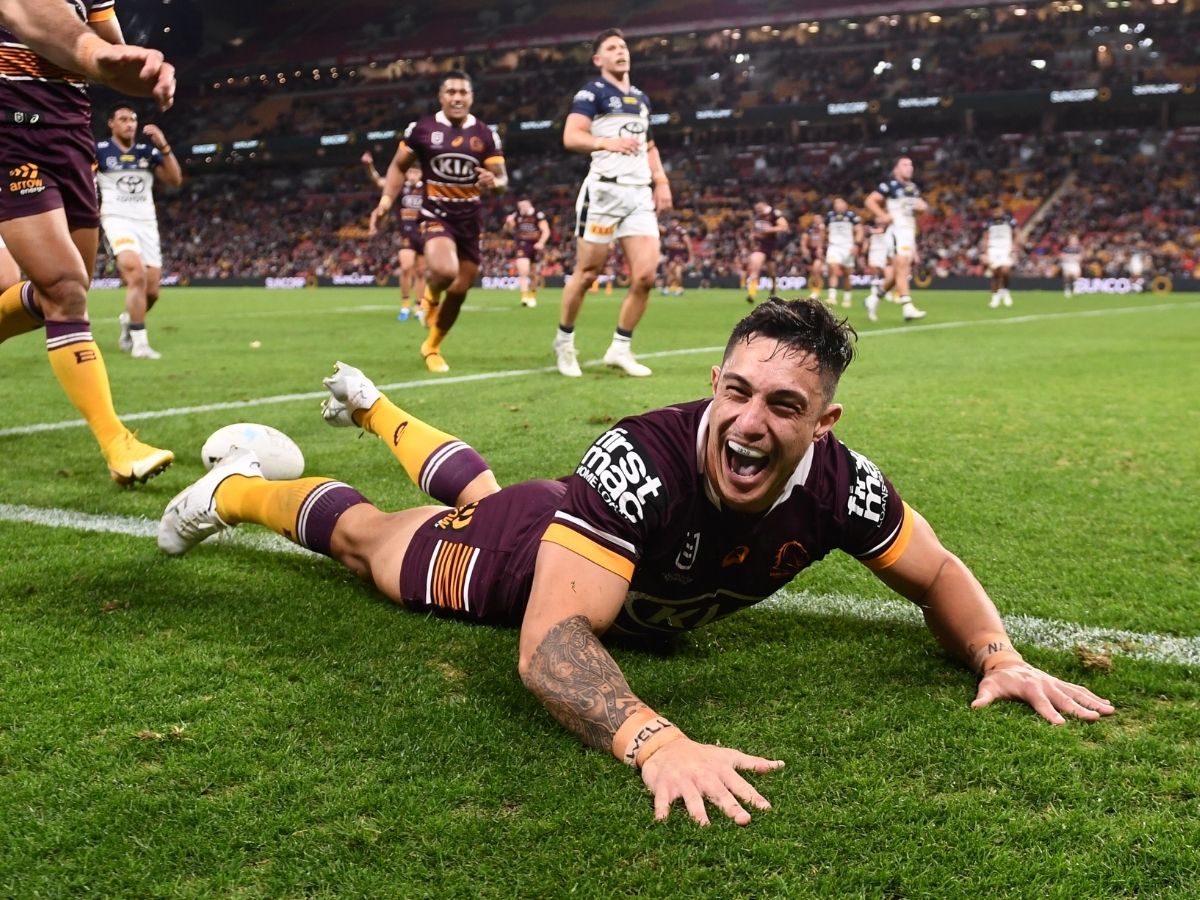 Staggs is a superstar, a box-office player who is worth the ticket money alone. The Brisbane Broncos favourite made his State of Origin debut for New South Wales earlier this year.

Staggs was born in Australia and is of Indigenous Australian and Tongan heritage. He has won three caps for Tonga and has also represented the Indigenous All Stars. 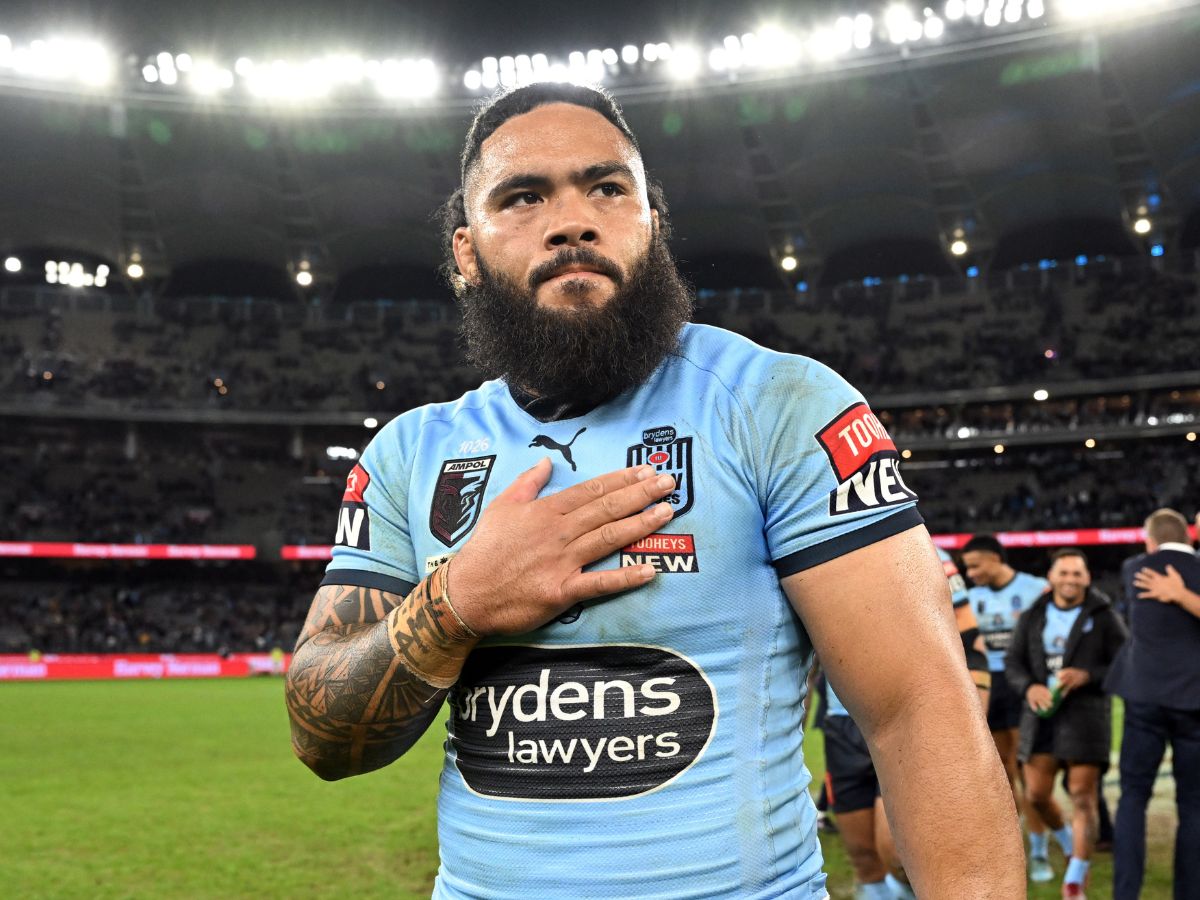 Talakai is enjoying a phenomenal year. He has been one of the NRL’s standout centres and played two games for the Blues in Origin.

The 25-year-old powerhouse will no doubt make his international debut for his beloved Tonga later this year. He is also of Niuean heritage. 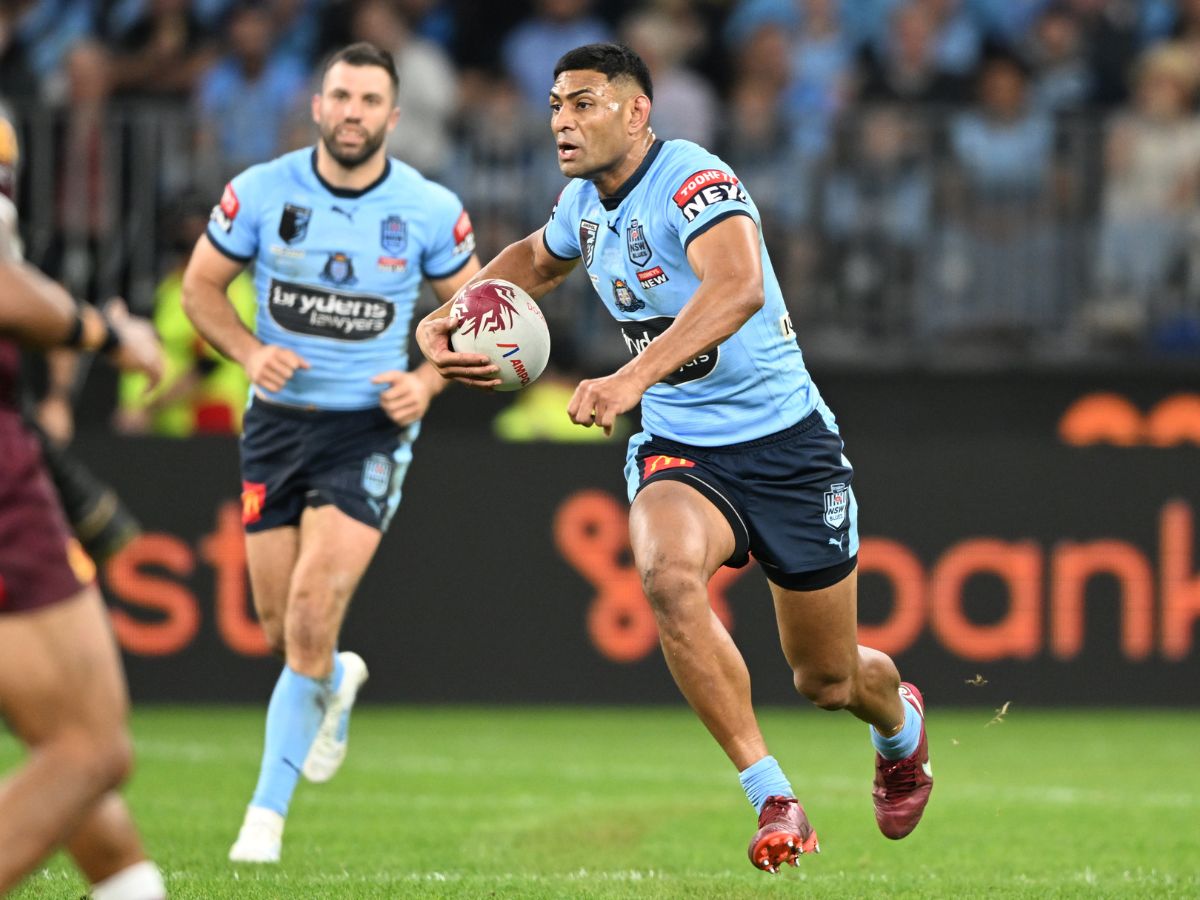 Tupou is one of the highest-profile players in this line-up. The 31-year-old has scored 129 tries in 220 games for the Roosters since making his first team debut in 2012.

Tupou has won 14 caps for Tonga and will be hoping to represent his heritage in this third World Cup this year. He has also played 10 games for the Blues in State of Origin.

Lolohea is having one of his best seasons to date for Huddersfield in Super League. The 27-year-old has played full-back for the majority of the year, but with Tonga being light on options in the halves, we’ve selected him at six.

Lolohea was born in Auckland, New Zealand and is of Tongan descent through his father. He has won 12 caps for Tonga and played in their last World Cup. 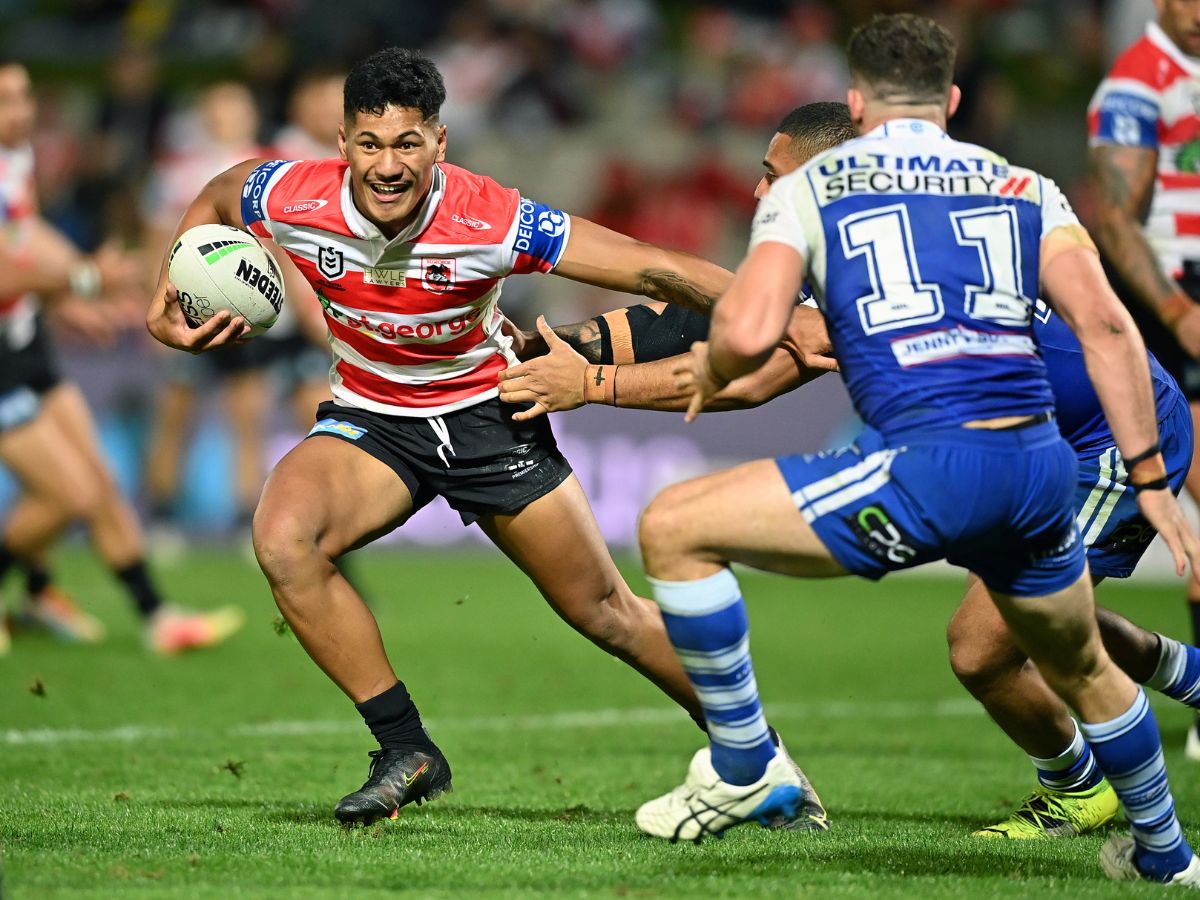 Amone is a player with a tremendous future in the game. He has already played more than 30 first team games for St George Illawarra Dragons despite only turning 20 in April.

The Wollongong-born half-back made his international debut for Tonga earlier this year. 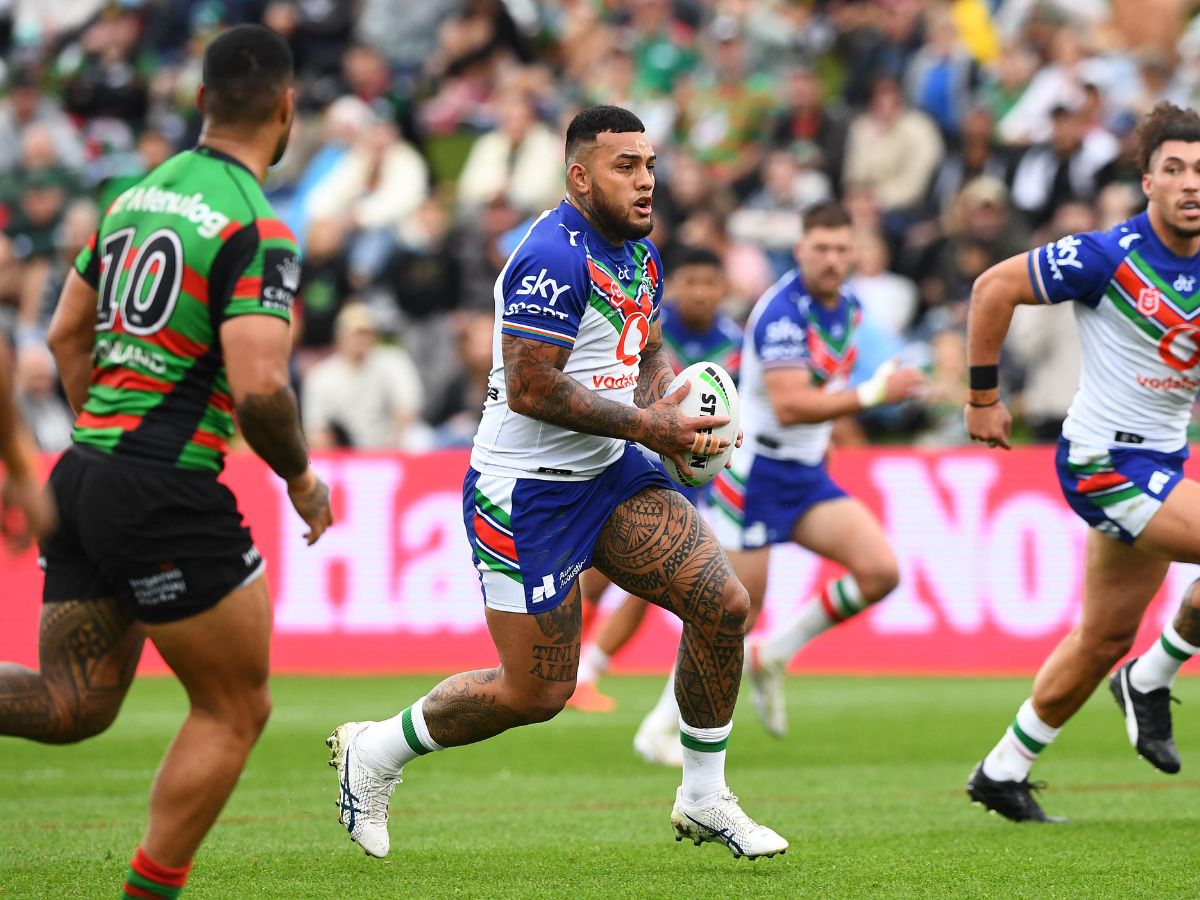 Fonua-Blake was born in Australia and is of New Zealander and Tongan heritage. The New Zealand Warriors powerhouse has made more than 130 appearances in the NRL  and has won seven caps for Tonga. 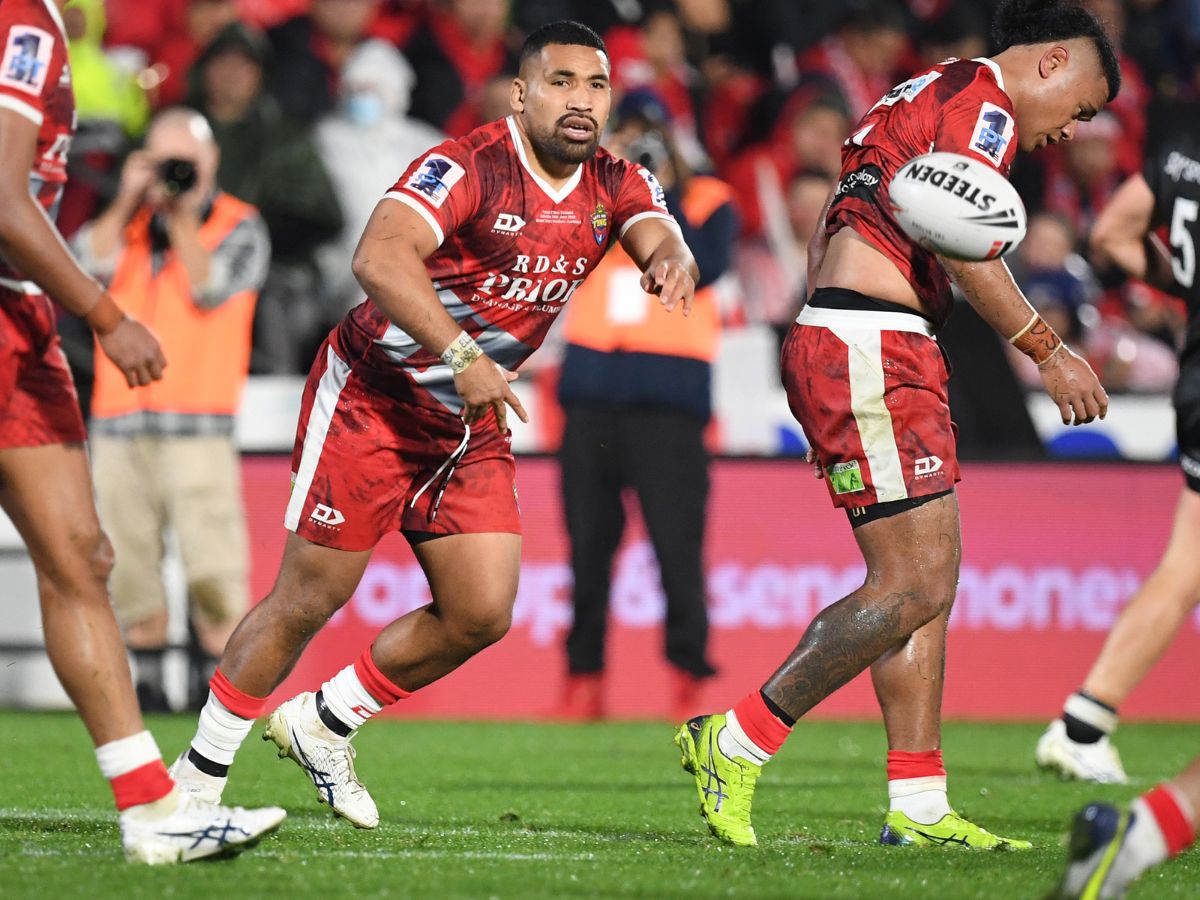 Havili has been a huge part of the Tongan set-up since making his international debut in 2013.

The 29-year-old hooker has played more than 100 NRL games for the Warriors, Dragons, Raiders and Rabbitohs. He was won 14 caps for Tonga and will be looking to play in his third World Cup. 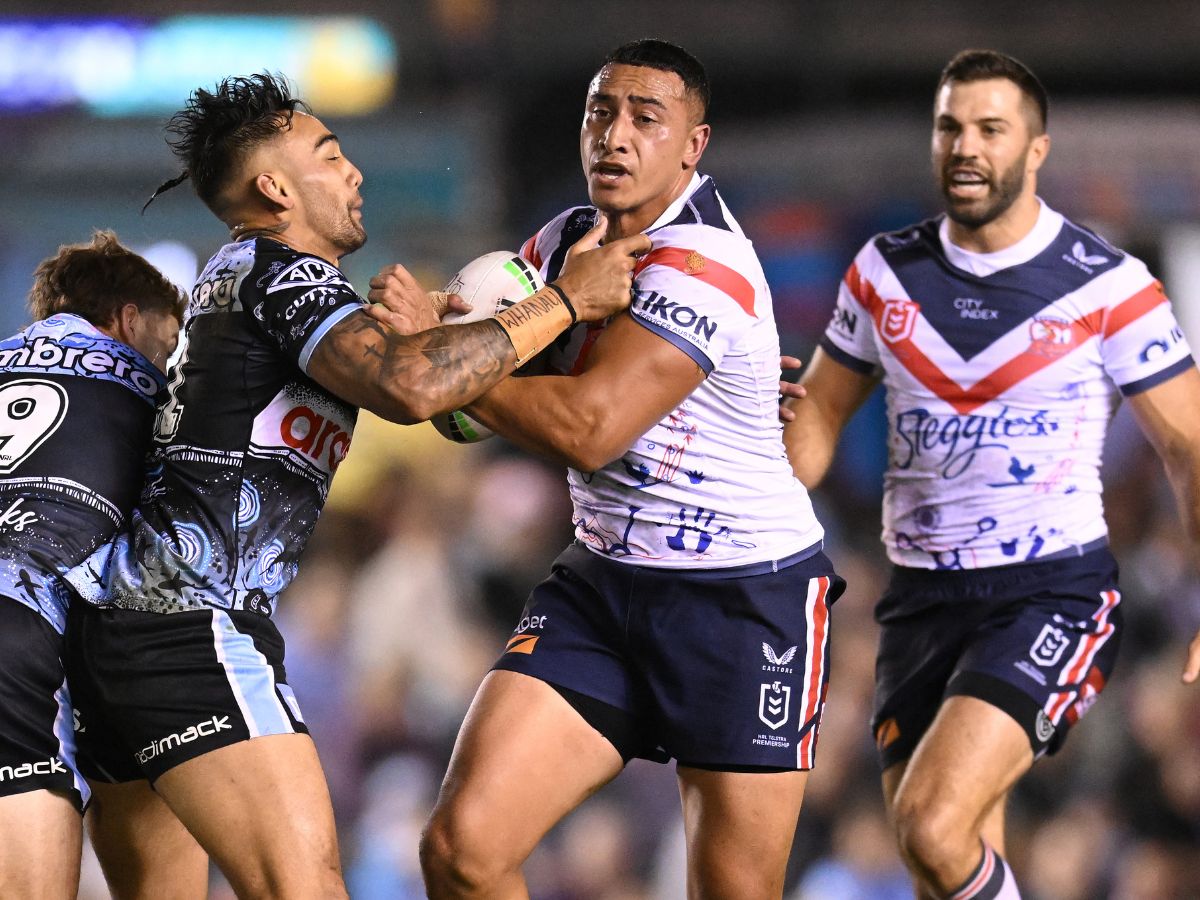 Goal-kicking prop Taukeiaho will move to Catalans Dragons in 2023 after making more than 150 appearances in the NRL for the Roosters.

The 30-year-old was superb for Tonga in the last World Cup and was named alongside his fellow countryman Jason Taumalolo in the Team of the Tournament. 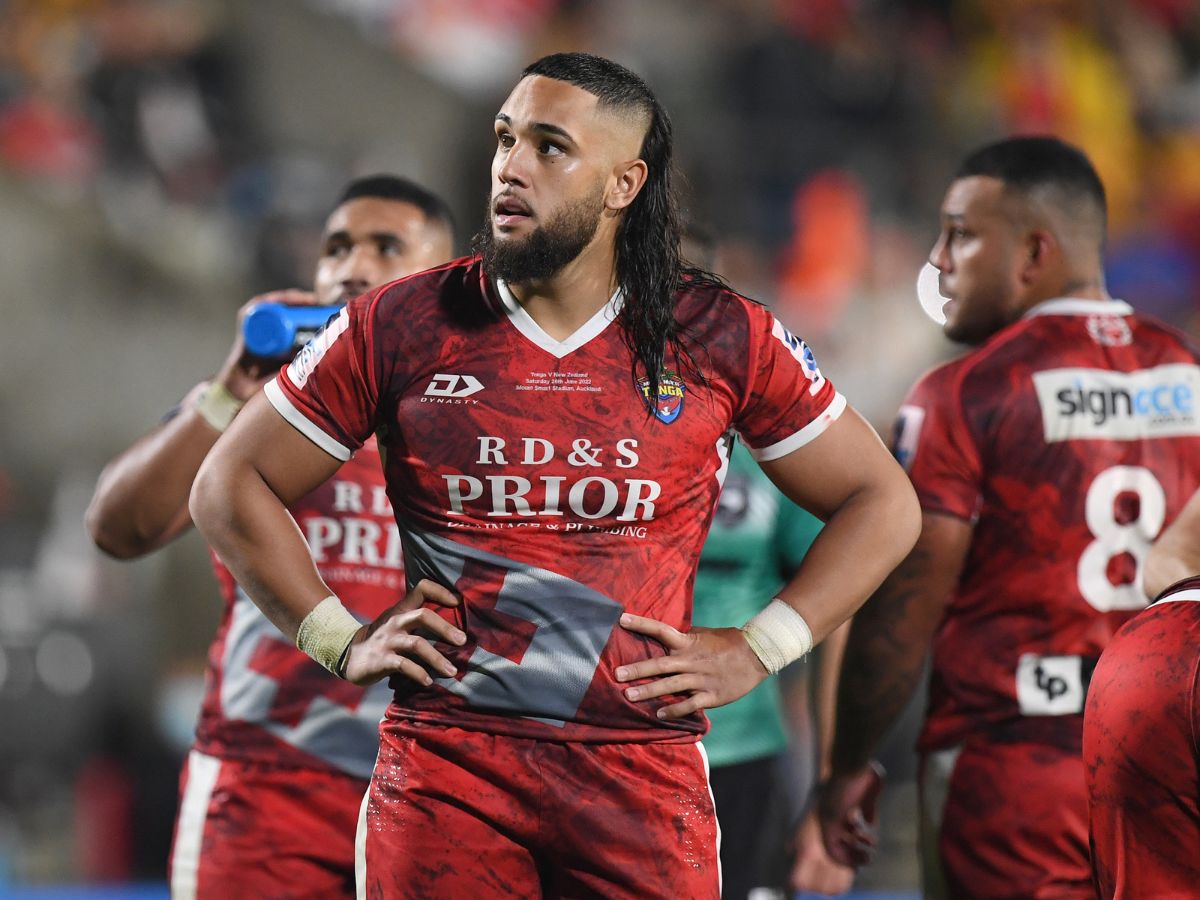 Koloamatangi is having a sensational season for the Rabbitohs, scoring six tries in 21 appearances.

The 24-year-old can play anywhere in the forward pack and will add utility value to Woolf’s side. He made his international bow for Tonga earlier this year in their 26-6 defeat to New Zealand. 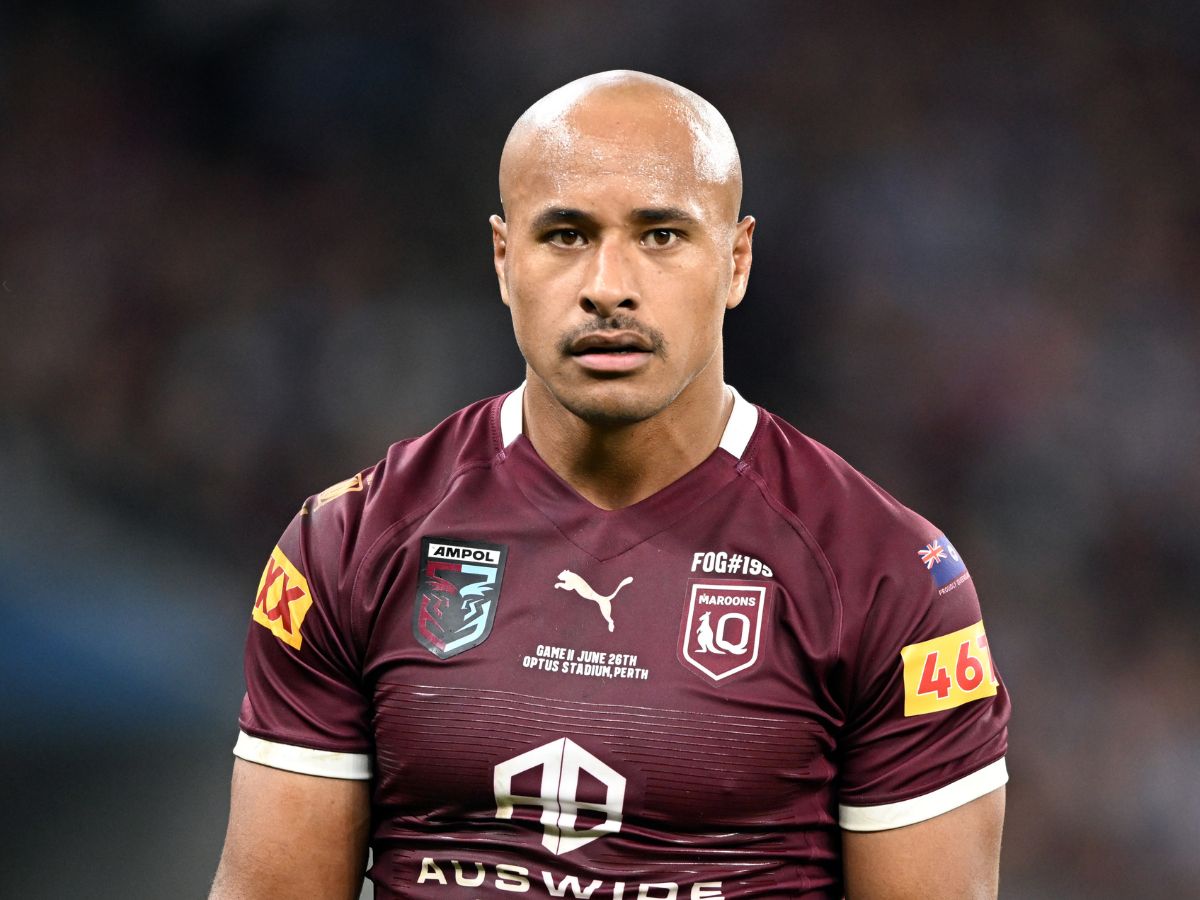 New Zealand-born Kaufusi has represented Tonga and Australia on the international stage, but has pledged his commitment to Tonga for this year’s World Cup.

The Melbourne Storm two-time NRL Grand Final winner made his international debut for Tonga in 2015 before helping Australia win the World Cup in 2017. He has played 14 times for Queensland in the State of Origin arena.

Taumalolo is, arguably, the best forward in the world right now. He has made more than 200 appearances for the Cowboys, helping them win the NRL Premiership in 2015.

Auckland-born Taumalolo made his international debut for Tonga in 2013 and played at the World Cup that year. He switched allegiances to represent his birth nation New Zealand in 2014, winning 10 caps until he switched back to represent his Tongan heritage in 2017.

Taumalolo has played 14 times in total for Tonga and will be hoping to represent his Tongan roots at a third World Cup this year. 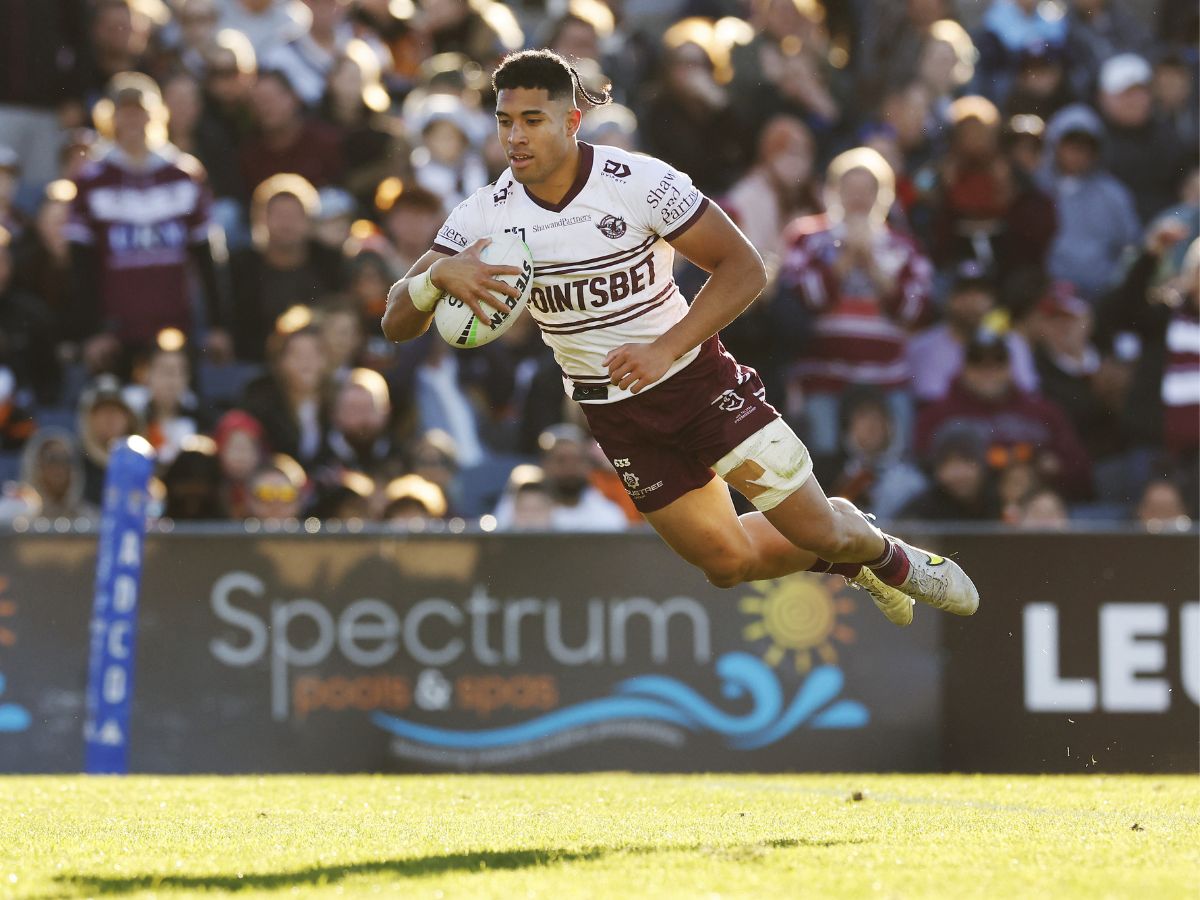 The 19-year-old is one of the game’s brightest young talents. He has already played 17 first-grade games for Manly.

Koula’s parents represented Tonga at multiple Olympics. His father Toluta’u Koula Snr, was a sprinter and his mother, Ana Siulolo Liku, was a hurdler.

The Sea Eagles star made his international rugby league debut for Tonga in 2022. He can play centre, full-back or wing, so this is why we’ve selected him on the bench in a utility role. 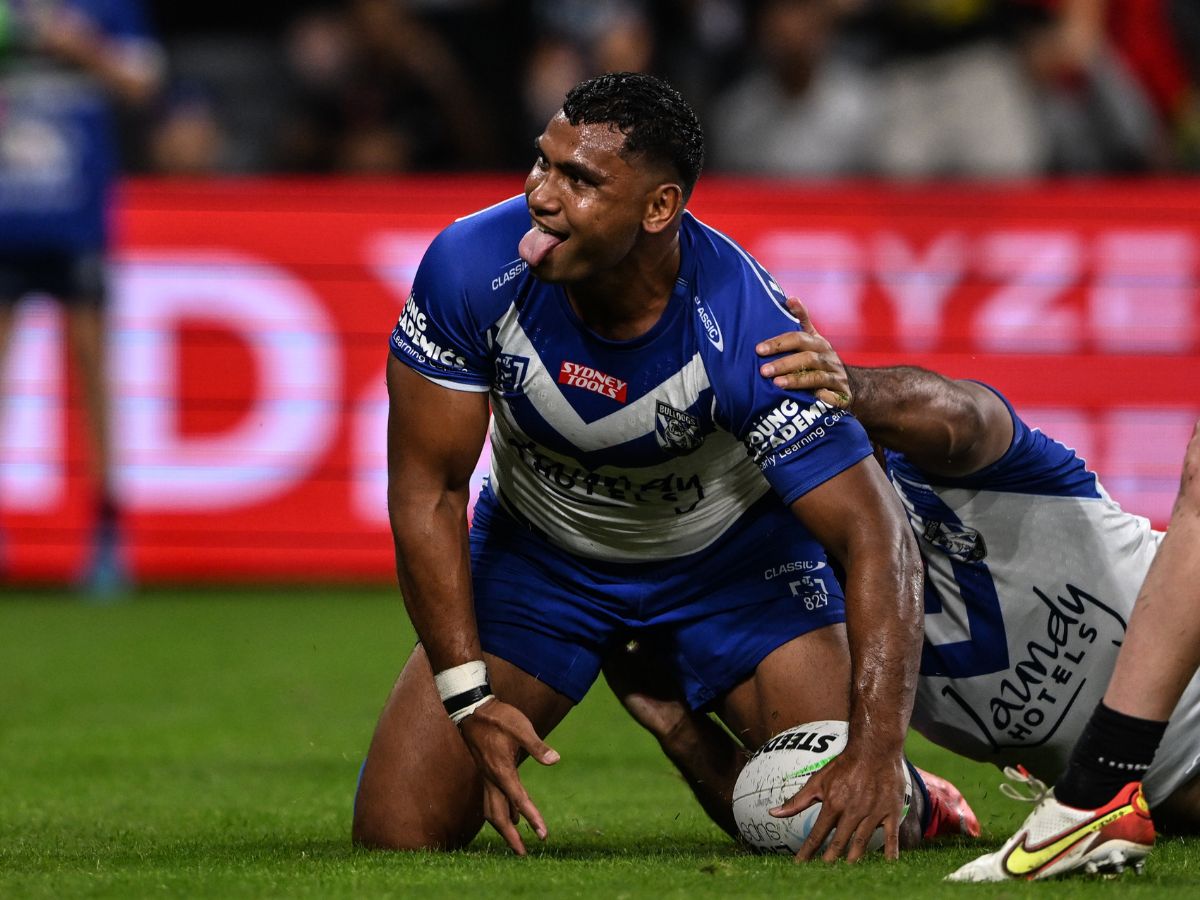 Pangai Junior was born in Australia and is of I-Kiribati, Niuean, Tuvaluan and Tongan heritage.

He has been one of the NRL’s standout forwards for several years now, having made more than 100 appearances for the Broncos, Panthers and Bulldogs. He has won six caps for Tonga. 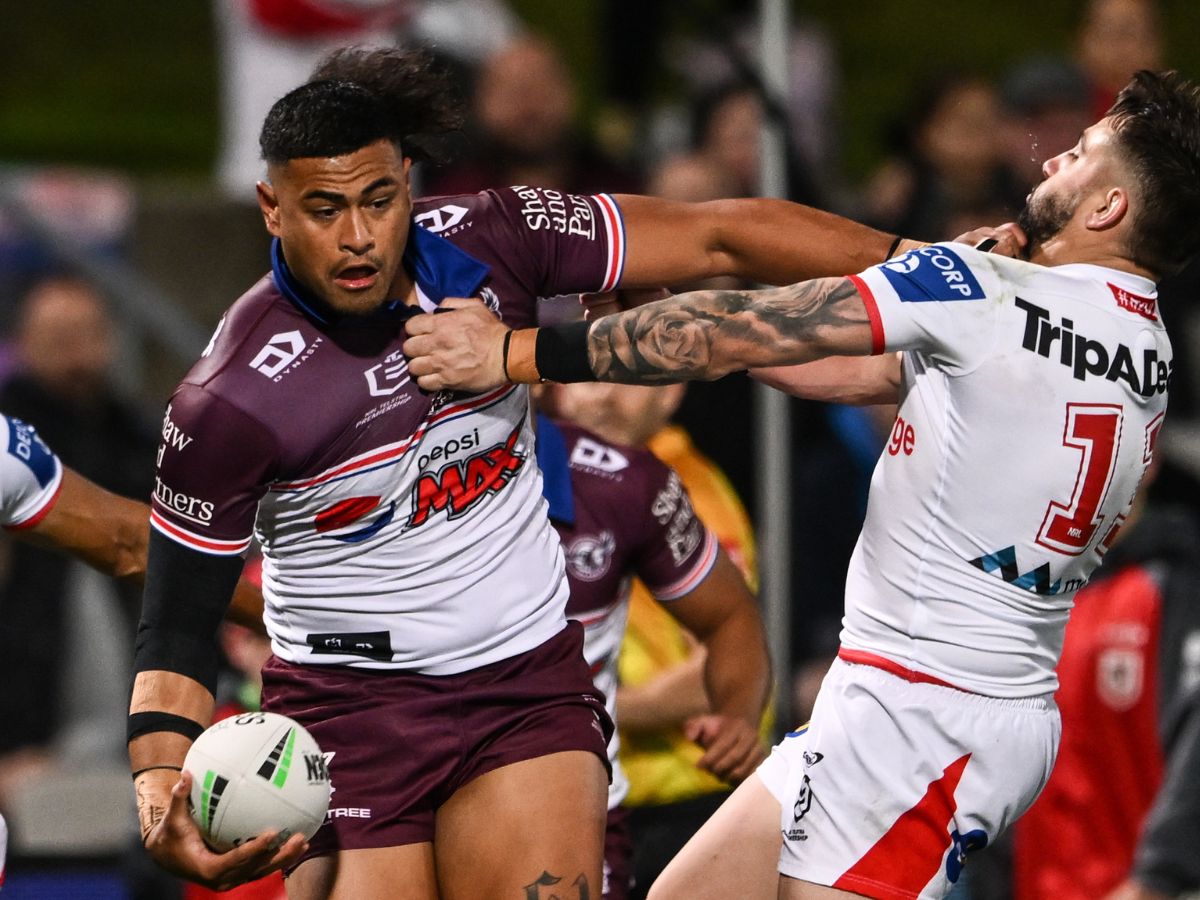 Olakau’atu was born in Australia and is of Niuean, Tuvaluan and Tongan heritage. He made his international debut for Tonga earlier this year.

The 23-year-old forward has played almost 50 games for Manly since his first-grade debut in 2019. 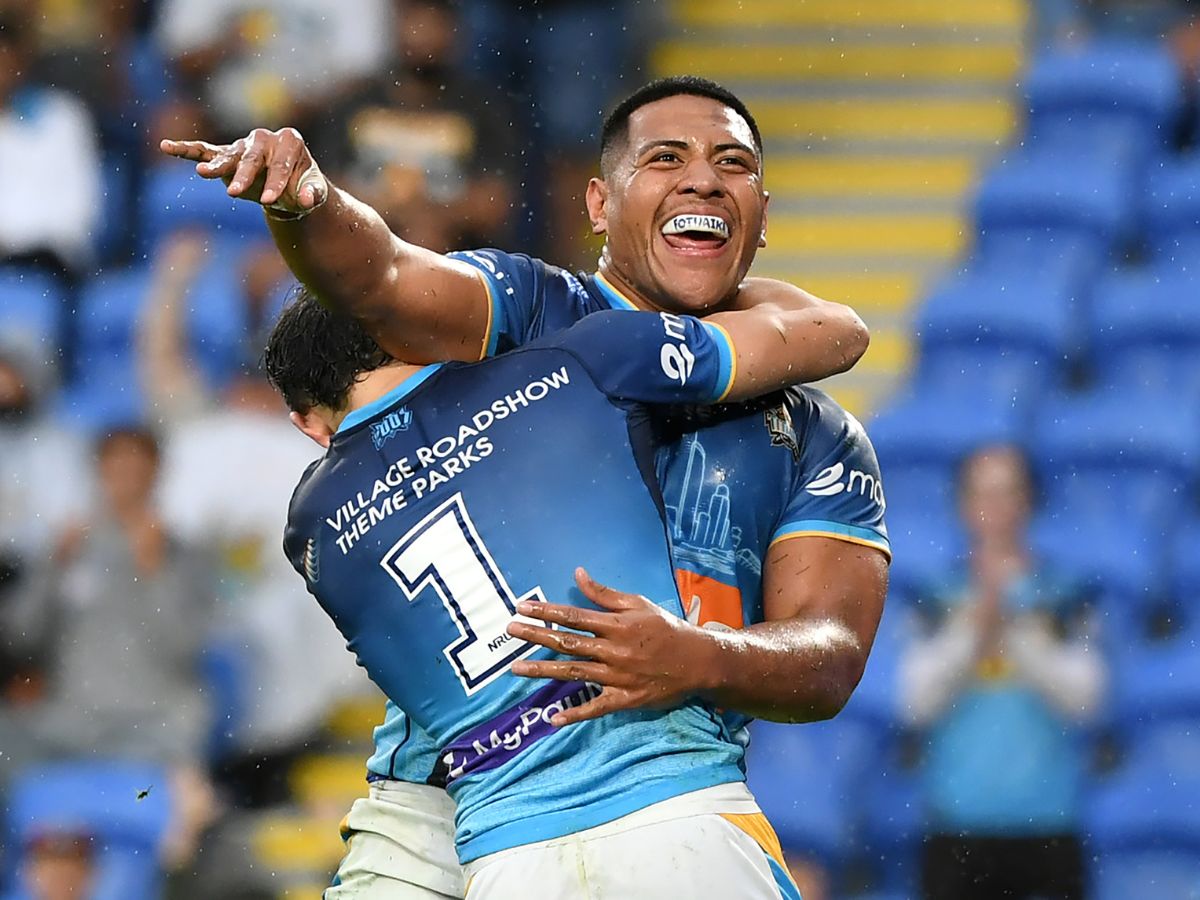 Fotuaika has incredibly made almost 100 NRL appearances for the Titans despite only being 22 years of age.

He has made five appearances for the Maroons in the Origin arena already and made his debut for Tonga in their mid-season defeat to New Zealand. The powerful prop has a huge future ahead of him.

Tonga have so much strength in depth, especially in the forwards. When making this line-up we’ve had to leave out Eliesa Katoa, Agnatius Paasi, Joe Ofahengaue, Ben Murdoch-Masila, Andrew Fifita, Taniela Paseka and Tevita Tatola.

In the backs, they’ve still got Tesi Niu, Will Penisini and Moses Suli among their ranks.

Woolf will have a healthy selection headache when it comes to the World Cup in England later this year, that’s for sure.