Shaun Wane handed 41 academy products their debuts during his seven seasons as Wigan head coach, and we have selected the greatest XIII from the list.

The Scotland international made his first-team debut for the Warriors while filling in for full-back Sam Tomkins in an injury-hit Wigan side that claimed a 33-32 win over Widnes Vikings in 2013.

Tierney, the son of dual-code legend Jason Robinson, scored a try in his debut game for his hometown club. Speaking after Tierney’s impressive first game, Wane told Press Association Sport: “He is a good player and the only way I am going to find out is putting him in games like that. He will play again this year. He is a real talent.”

The full-back or winger scored 18 tries in 40 appearances for Wigan, before signing a two-year deal with French side Catalans Dragons in 2018. 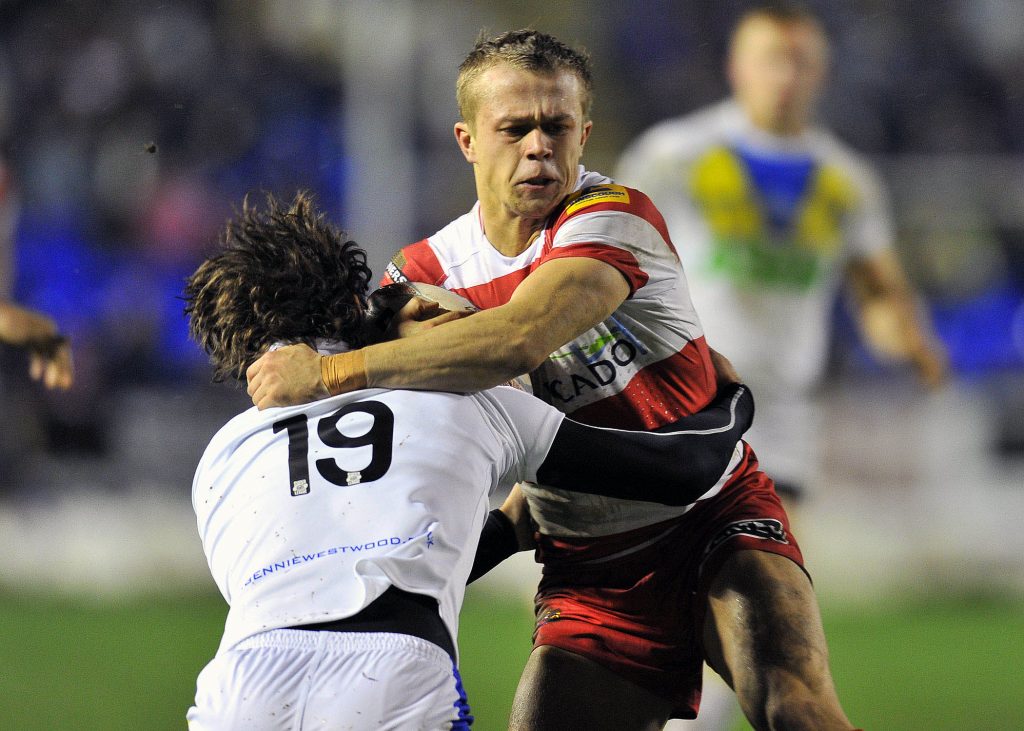 The former Leigh Miners Rangers junior made his first-team debut for Wigan in a 34-33 defeat to Hull FC back in 2013.

There is no doubt Manfredi possesses a fantastic try-scoring prowess, but he has been unlucky with injuries during his career so far in his career. Manfredi suffered an ACL injury in 2016 which ruled him out for the entire 2017 campaign.

He suffered a similar injury while playing for the reserves and only came back late in the 2018 season. However, his long-wait to return to first-team action was worth it as he scored two tries to help Wigan beat Warrington in the Grand Final last year.

Manfredi revealed to Love Rugby League that he came close to quitting the sport during his two-year injury nightmare. He said: “I’ll be honest, I was ready to give up a few times and that was the lowest point I had got to. Waney has been really good with me, as have all the staff. They’ve been here for me, always made sure that I’m okay and I can’t thank them enough. 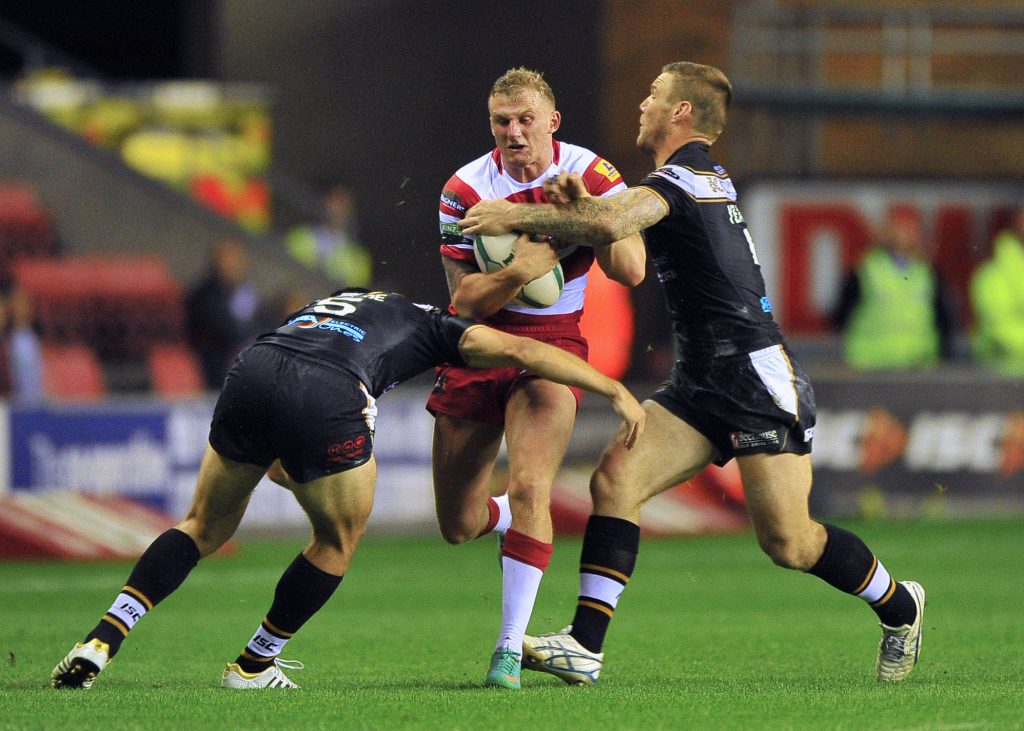 The 27-year-old scored two tries on his first-team debut for Wigan in a 52-10 victory over Wakefield Trinity.

Thornley came through the academy at Wigan, before switching codes to play rugby union with Sale Sharks for two years.

He returned to the Warriors, where he made his debut in Wane’s first year as head coach in 2012.

After making debut, Thornley told Wigan Today: “To score two tries on debut is a bit of a dream come true. With George [Carmont] retiring, hopefully this year I can prove what I can do and get that spot next year.”

Thornley left the Warriors in dramatic circumstances though when it was announced that he would join Hull KR ahead of the 2016 season. Wigan chairman Ian Lenagan said: “From our point of view, we’re a little bit irritated at the lack of loyalty having taken care of him so well over the last 18 months but players have to look after themselves as well as and he’s made the decision.”

He joined Wigan’s neighbours Leigh Centurions for the 2019 season after deciding to play part-time in the Championship. 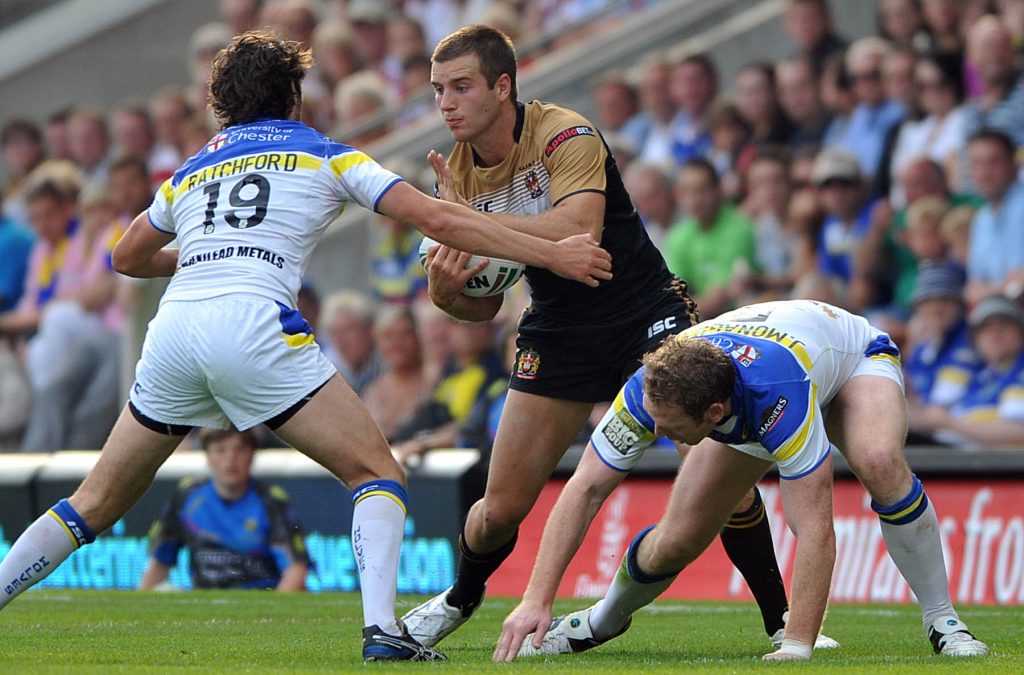 The rise of Gildart, the son of former Wigan, Wakefield and Oldham player Ian, has been nothing short of sensational.

Gildart was given his debut when he was just 19 when the Warriors were short of centre options back in 2015. He scored a try to help the Warriors seal a convincing 28-0 win at local rivals Warrington Wolves.

The three-time England international didn’t make his senior debut for hometown club Wigan though. He spent a month on loan at Salford Red Devils earlier in 2015, making three appearances for the club.

Gildart is one of the most promising centres in the game. He has made almost 100 appearances for the Warriors, despite being only 22 years of age.

In an interview with Mirror Sport just six weeks after his debut, Gildart said: “I was thrown in at the deep end of the season, but I wouldn’t have it any other way. Shaun has given me that shot and hopefully I’ve not let him down.” 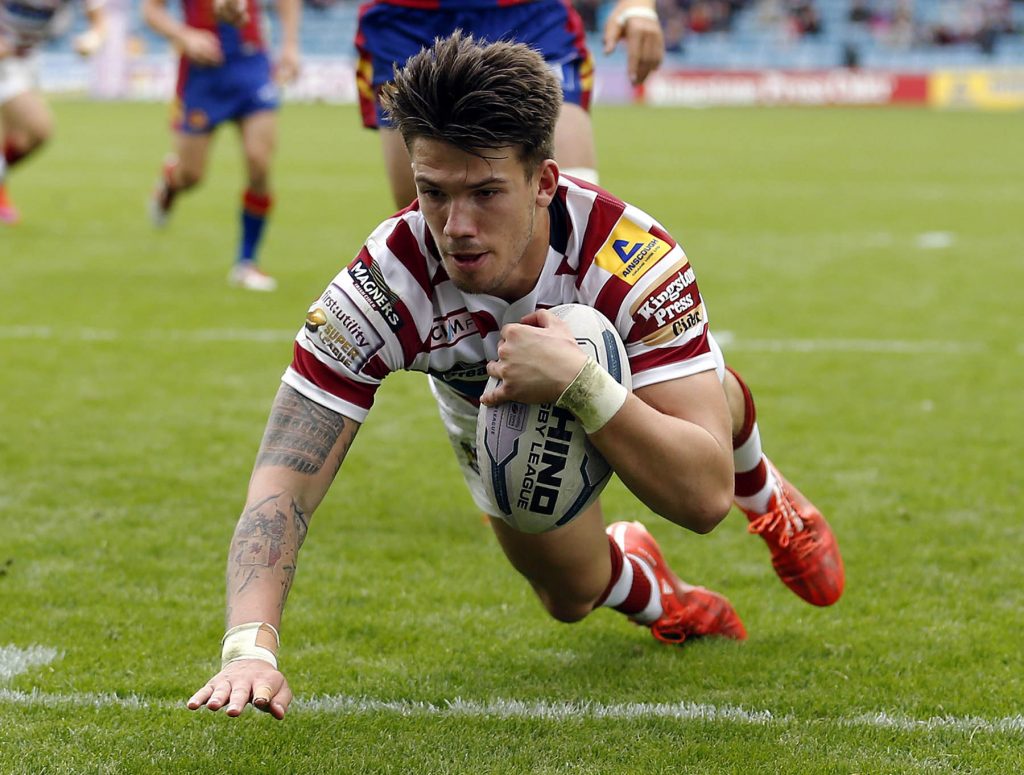 After scoring 24 tries in 18 games for the Under-19s in 2013, he was rewarded with two appearances in Super League, making his debut in a 21-16 win over Hull Kingston Rovers.

Burgess is one of the highest-profile players who has been handed his debut by Wane, but he couldn’t believe he was called-up to the first-team at the time. He told the Daily Star: “I got a call but I didn’t recognise the number.

“I accepted it but didn’t believe it when the caller said ‘it’s Shaun Wane, I want you to come to Florida with us tomorrow. It didn’t really sound like him, so I was effing and jeffing and telling him to get out.”

Burgess made his England debut in 2015 and has earned three caps for his country so far. He enjoyed a year in the NRL with Sydney Roosters and South Sydney Rabbitohs in 2016, scoring seven tries in 13 games, before returning to Wigan. 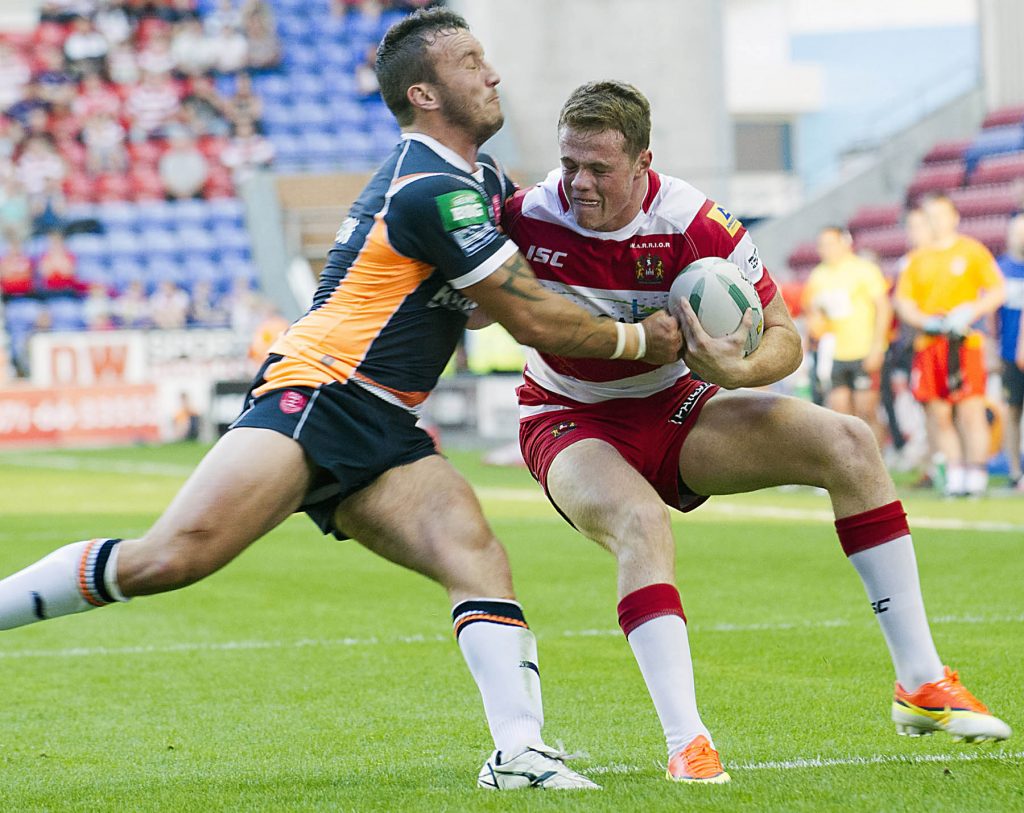 The England international was given his senior debut by Wane in an emphatic 60-10 win over neighbours Leigh in a Challenge Cup match back in 2013 and scored from a fine solo effort in the game.

Williams is without doubt one of the brightest talents in the game. The 24-year-old has already made over 150 appearances for Wigan and has bagged 46 tries in the process.

He scooped Super League’s Young Player of the Year award in 2015, and helped the Warriors win the 2016 Grand Final, 2017 World Club Challenge and 2018 Grand Final.

Williams already has ten caps for England and was part of their World Cup squad in 2017. He is hotly tipped to make the Great Britain squad this year.

In an interview with Manchester Evening News back in 2015, Wigan legend Bill Ashurst said of Williams: “We are going to hear a lot more about this lad because he is special. He definitely has a great career ahead of him.” 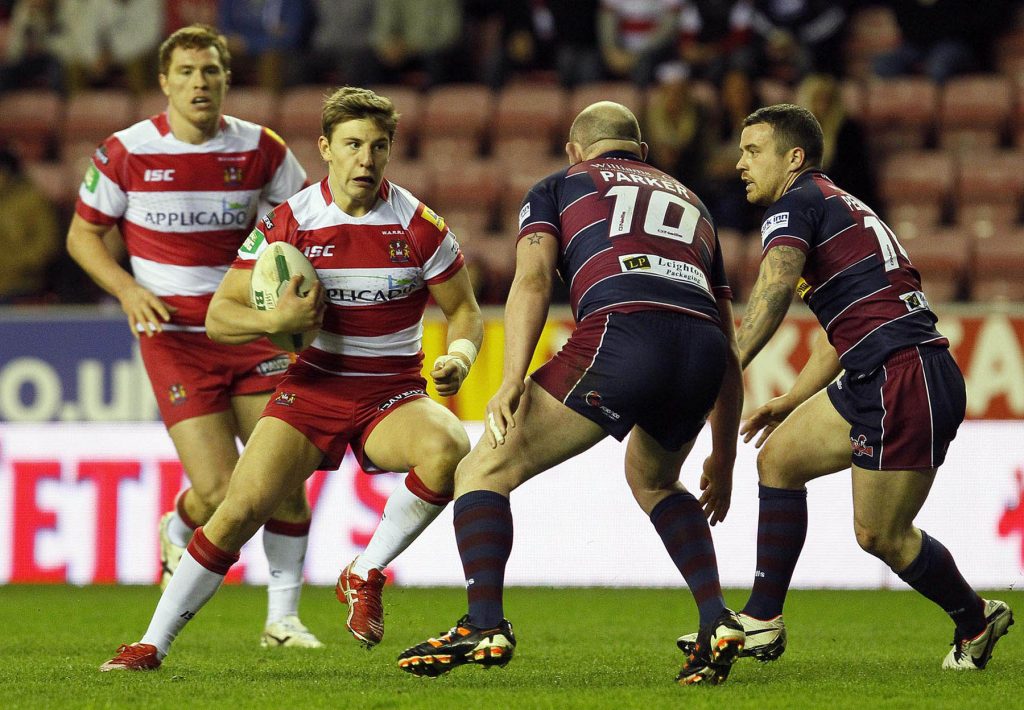 Hampshire made his first-team debut in the same game as Tierney, in that remarkable and gutsy 33-32 win at Widnes.

The 24-year-old, nicknamed Rocky, scored 10 tries in 33 appearances in his four professional seasons at the Warriors.

Hampshire played as much at full-back as he did in his preferred position of half-back, and just couldn’t nail down a regular spot under Wane. However, he has since flourished in spells with Castleford Tigers and Leigh Centurions, before ending up at his hometown club Wakefield Trinity.

Hampshire seems to have found his feet at Trinity. He has scored eight tries in 32 games and has become a starter in Chris Chester’s outfit. 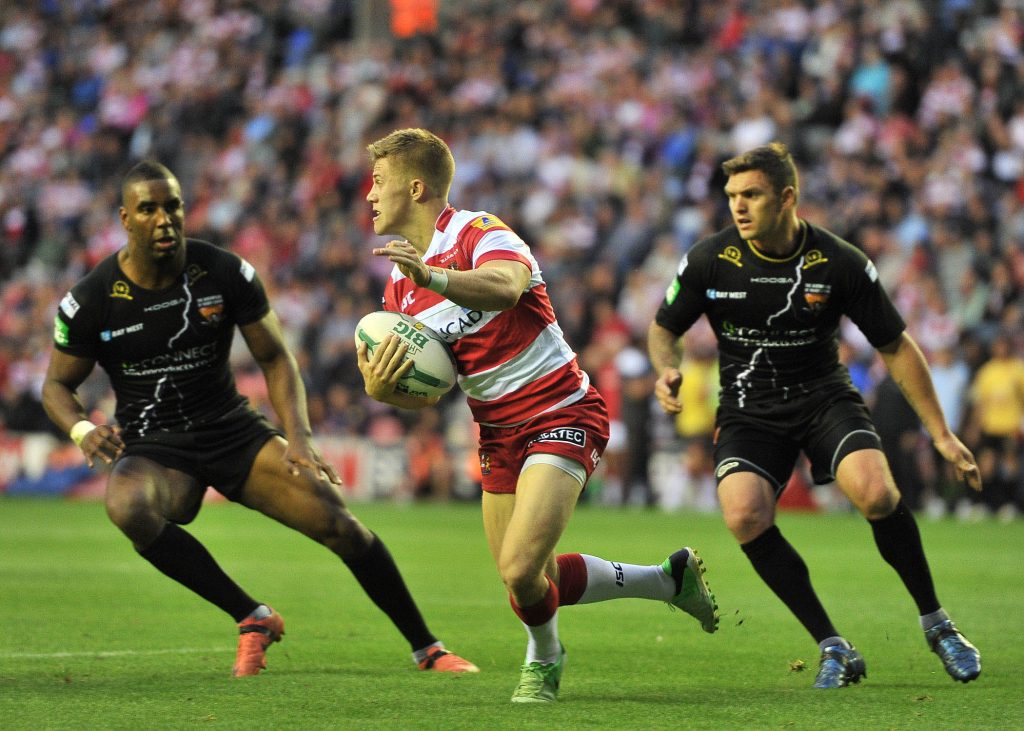 The front-rower played his first game for the Cherry and Whites in a 20-6 win over Leeds Rhinos at the DW Stadium in 2012.

Ahead of giving Spencer his debut, Wane said: “Tom’s done really well during pre-season and has earned his chance through a lot of hard-work. He’s really knuckled down and he’s a very talented player.”

The 28-year-old played just seven games for the club, before joining Leigh Centurions on a permanent deal in 2014. He holds the current bench press record at the Warriors, lifting a staggering 190kg. 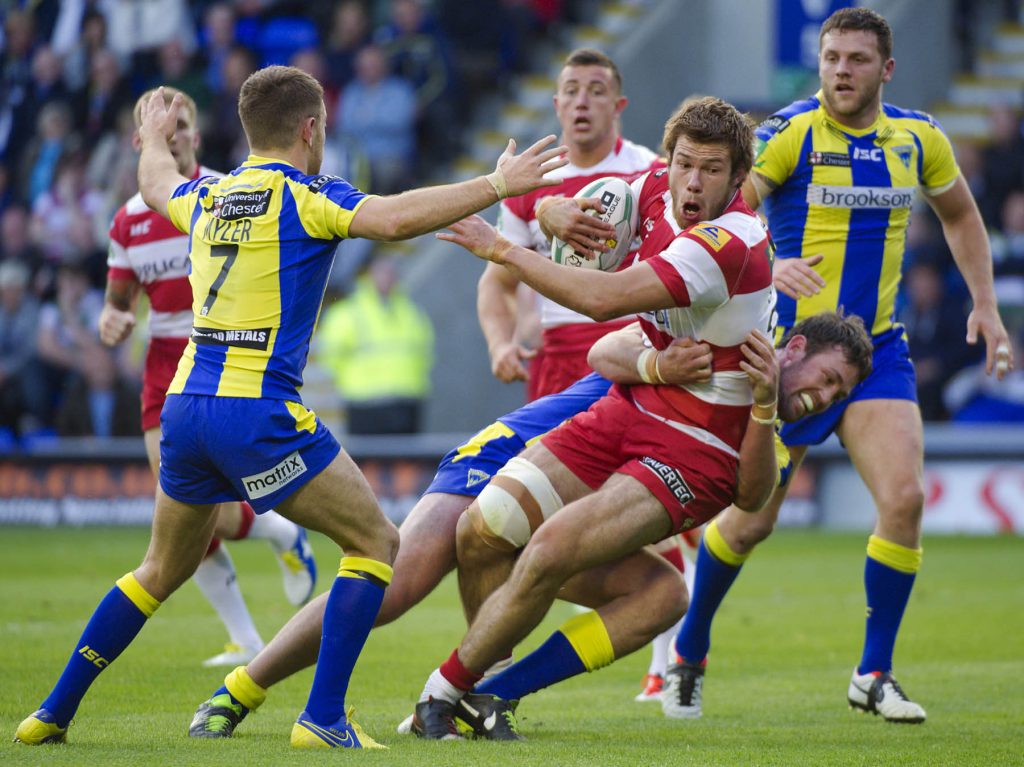 The England Knights vice-captain linked up with Wigan’s academy when he was 16 and helped the club win the Academy Grand Final against Warrington in 2011.

Powell made his senior debut in August 2012, filling in for the injured Brett Finch as the Warriors defeated Hull FC 48-10.

He has played over 160 games for his hometown club and has transformed into a hooker. Powell is still comfortable at playing in the halves but is predominantly a nine for the Warriors due to his smart passing and impressive work-rate in defence.

Back in 2015, Wane said of Powell: “He is a good half-back who is probably our most valuable player because he can play various positions.

“His subtlety out of dummy half is fantastic. I like him a lot.” Powell certainly hasn’t disappointed Wane. 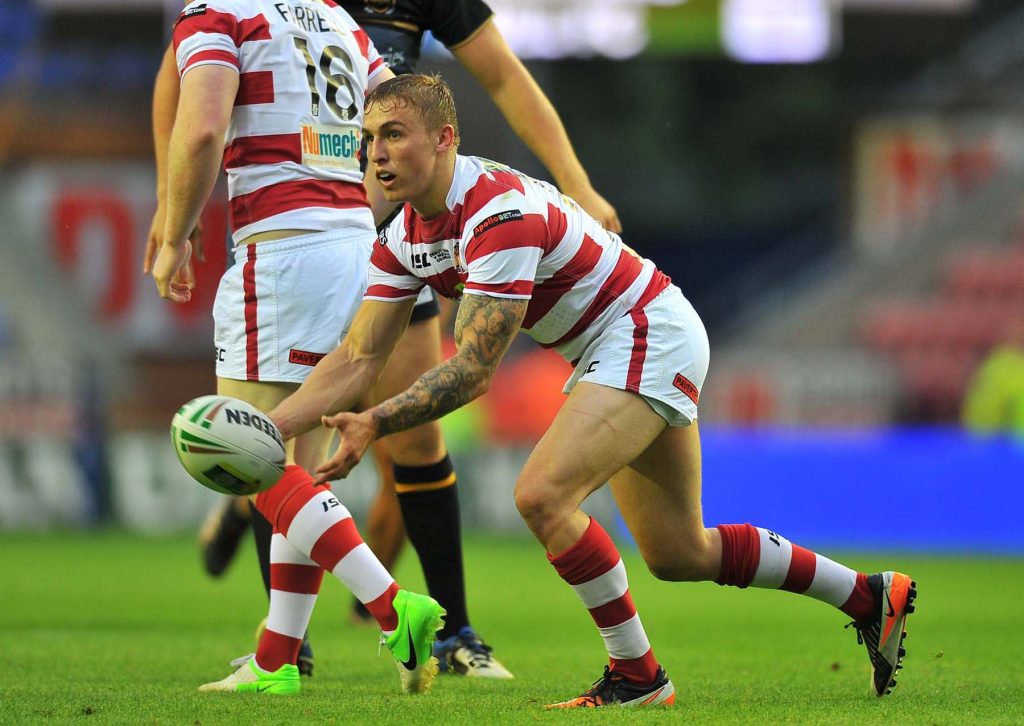 Crosby first made his appearance for the Warriors in a Challenge Cup win over North Wales Crusaders back in 2012.

He really burst onto the scene in 2013 though and made a good impression in Super League. Crosby played in four consecutive Super League Grand Finals for Wigan from 2013 through to 2016.

The 28-year-old made 102 appearances for the Warriors, scoring seven tries. He joined Warrington in 2017, spending two years at the Wolves, before signing for Leeds Rhinos on a permanent deal in 2019.

On Crosby, Wane said: “Having handed Dom his debut in 2012, it has been a pleasure to watch him grow and mature both on and off the field.” 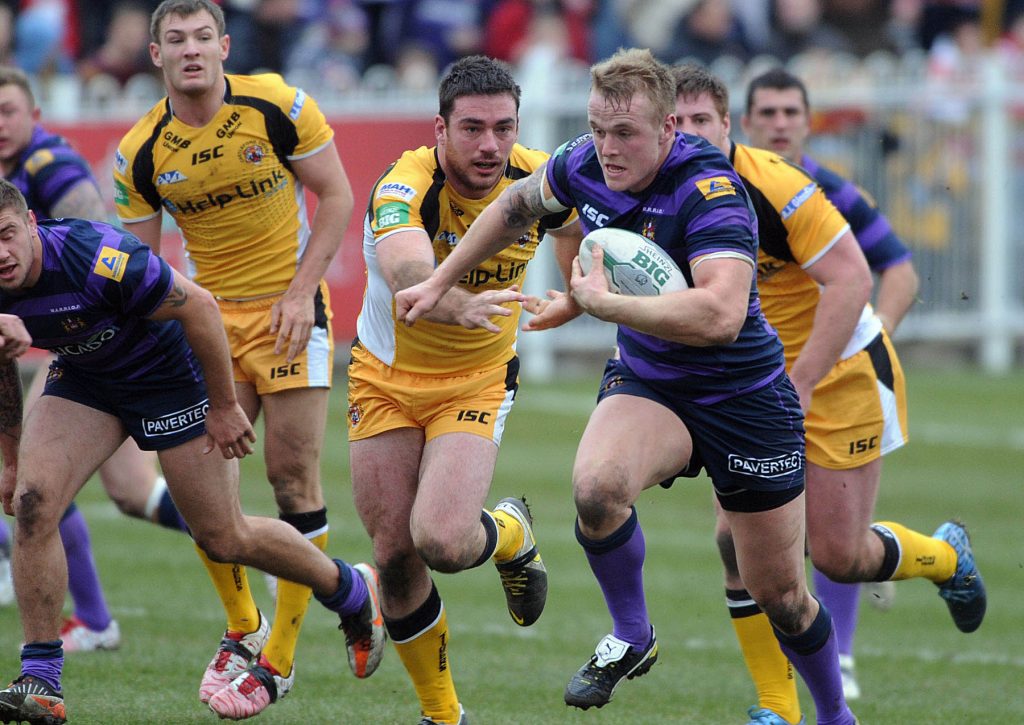 The back-rower made his debut in the same game as Williams, in that 60-10 thumping of Leigh in the Challenge Cup.

During his time at the Warriors, he spent time on dual-registration at South Wales Scorpions and Workington Town as well as enjoying loan spells at London Broncos, Salford and Hull KR.

Greenwood’s brother, Joe, who came through the St Helens academy, made the move to Wigan in 2018 after a stint in the NRL from Gold Coast Titans. 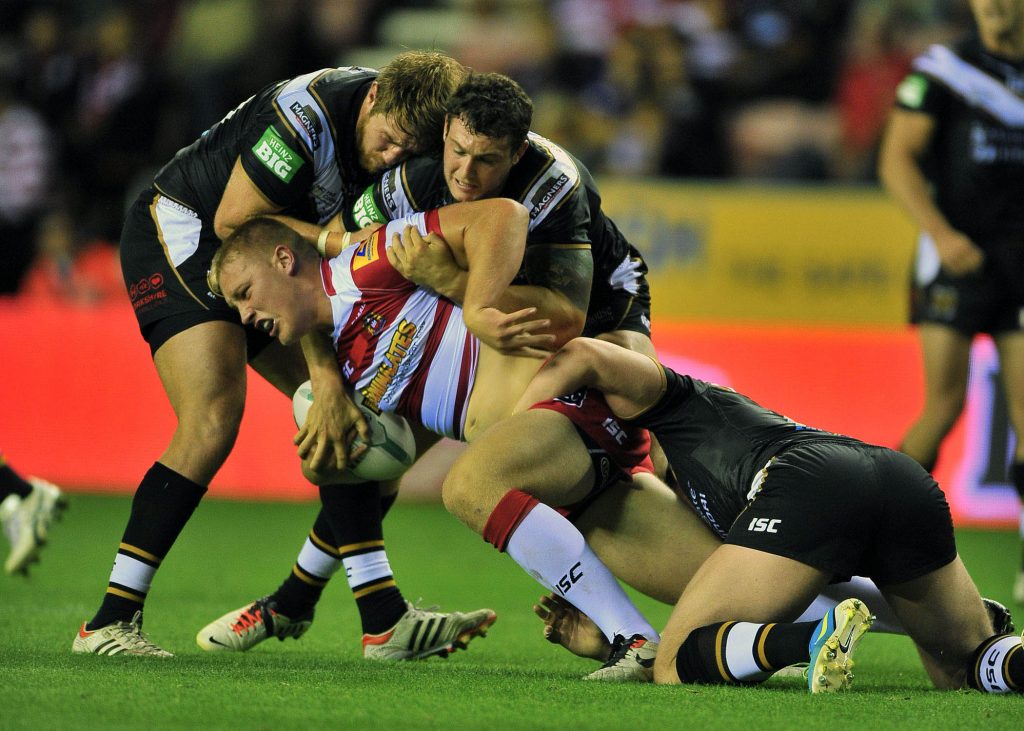 Burke was another player to make his debut during the 2017 season as he came off the bench in a 17-17 draw against rivals Warrington at the DW Stadium.

The 26-year-old enjoyed a season-long loan at Hull Kingston Rovers in 2015, while making 23 appearances for hometown club Wigan during four seasons with the club.

In an interview with Wigan Today in 2015, Wane said of Burke: “He’s a Wigan lad and going away to a new club, a new environment and having to make a new bunch of friends, it’s helped him.”

Burke left the Warriors in 2016 though for Widnes Vikings, and he is now at Salford Red Devils. 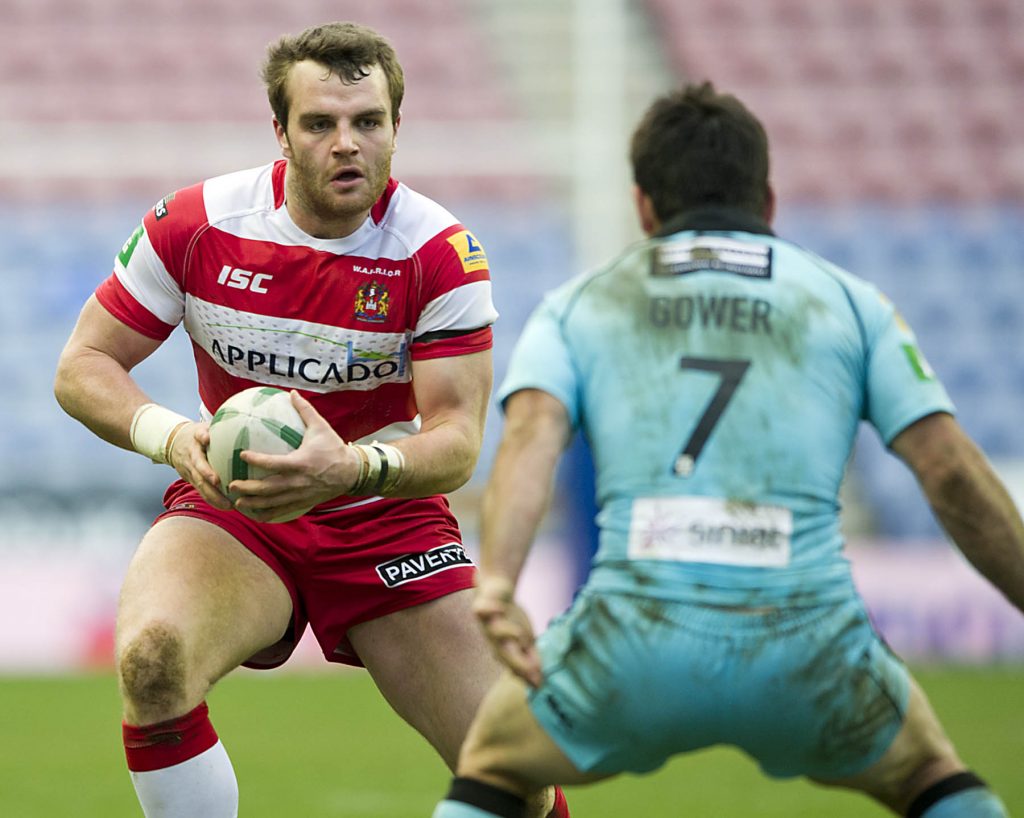 Sutton is – arguably – the best forward Wane handed a debut to. He played his first game for the Warriors in an 84-6 sweep over Bradford Bulls in 2014.

Despite being just 23 years of age, Sutton played 119 games for his hometown club, scoring 11 tries, before signing for NRL giants Canberra Raiders on a two-year deal ahead of this season

Sutton proved to be a great utility player during his time at Wigan, with him being able to play in the front-row, back-row or at loose forward. He often acted as a solid impact player when coming off the bench.

He has already made a fine start to life Down Under, helping Canberra beat Gold Coast Titans 21-0 in the opening round of the 2019 NRL season.

On Sutton’s move to Australia, Wane said: “Personally, I’d have liked him to stay for a few more years, win a few more things here then he’s ready, but he sees himself as ready now and I’ll support him on that and give him everything he needs.

“He’s chosen that route and good luck to him. I’ll help him in any way I can.” 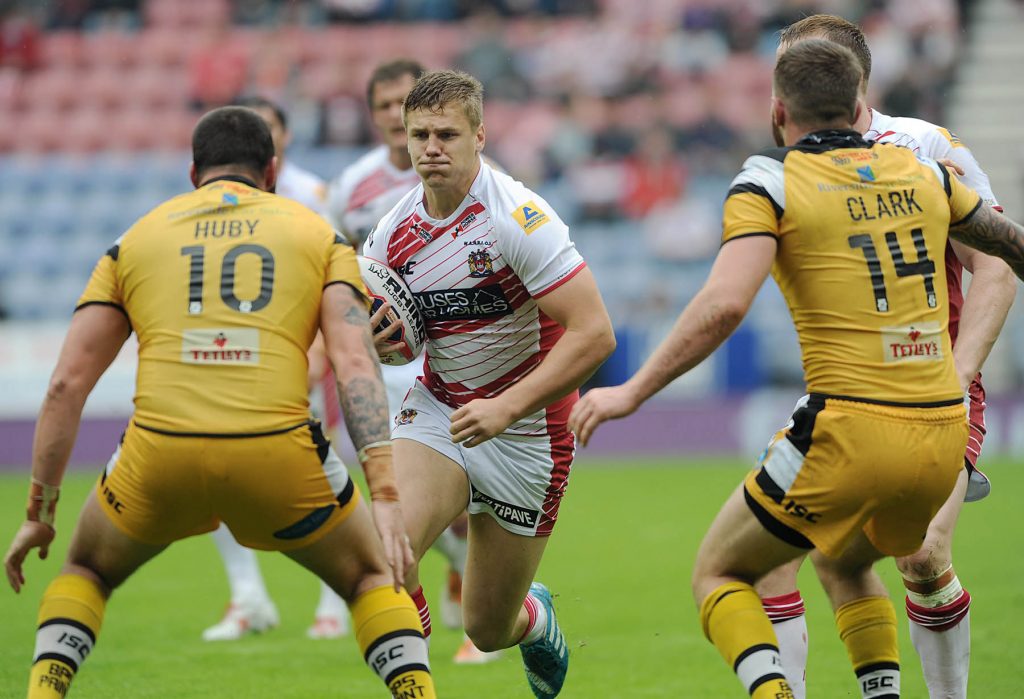