Warrington crowned Challenge Cup winners for the ninth time. Sheffield taste Wembley success in the 1895 Cup. Here’s a look back at all the action over the weekend in a bitesize fashion. 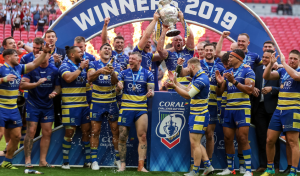 There is only one place to start. Despite being without star man Blake Austin and going into the game as heavy underdogs, Warrington produced one of the biggest shocks in recent Challenge Cup memory to topple runaway Super League leaders St Helens 18-4. Everything seemed to go their way; whether it be their heroic defensive efforts, willingness to run tough down the middle, or even a little bit of luck here and there, they never allowed the normally free-scoring Saints to get into their rhythm. Steve Price deserves huge credit for developing a game plan which nullified the threats posed by Justin Holbrook’s side, and he will be hoping they can use this newfound momentum to halt their five-game losing run in the league.

From Man of Steel to Lance Todd Trophy winner 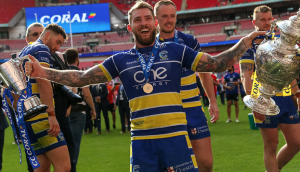 Daryl Clark was named Lance Todd trophy winner after a stellar display, capped off by his match-winning try with eight minutes remaining. The 2014 Steve Prescott Man of Steel recipient received 21 of the 34 votes after yesterday’s game, 14 ahead of his nearest rival, Stefan Ratchford. It topped a superb afternoon for Clark, 26, who had tasted defeat at Wembley on his previous three visits; with Castleford in 2014 and Warrington in 2016 and 2018.

Sheffield make it two victories over Widnes in less than a month as they were crowned victors of the inaugural 1895 Cup Final. Forward Aaron Brown crossed for a hat-trick to help the Eagles on their way, and Mark Aston’s side managed to keep the Vikings scoreless in the second period to wrap up victory. Despite leading 12-0 early on, Keiron Purtill’s side were made to rue the loss of influential hooker Jordan Johnstone after only four minutes, the 22-year-old leaving the field with a suspected fractured eye socket. The reshuffle seemed to be too much for the Merseysider’s to overcome, the Eagles eventually running out convincing winners. 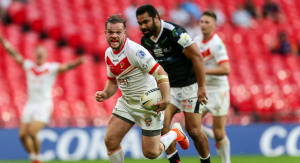 The concept is certainly a good one, but the hordes of empty seats as Widnes and Sheffield did battle on a hot summer’s evening in London did nothing but reinforce that the 1895 Cup needed to be played as a curtain-raiser to the Challenge Cup final. That way, the game would help build the pre-game atmosphere and would likely attract a larger crowd, with little more than 10,000 staying to watch the second game of the day. It seems the overwhelming consensus is that a shift in time slot would be beneficial for all, so don’t be surprised to see an earlier kick-off time for future editions of the 1895 Cup Final.