Adrian Lam, the newly-appointed coach of Leigh, has taken to his own Instagram account to dismiss the rumours, with Lachlan contracted to the Roosters for 2022.

Adrian posted: “Fake news! No truth in this story whatsoever. I have never spoken to Lachlan about moving to the UK. Lachlan loves the Roosters Club and he is contracted there for the 2022 season! End of story!” 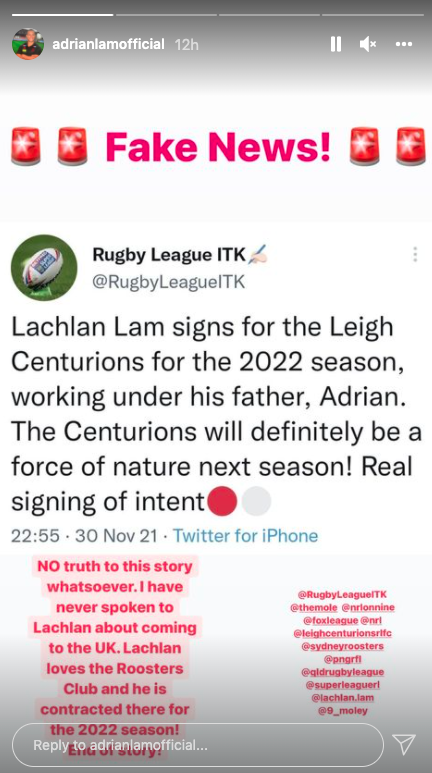 The 29-year-old goal-kicking prop has reportedly turned down an offer from Wayne Bennett’s Dolphins to join the French club. The Daily Telegraph report that Taukeiaho will only link up with the Dragons once his contract with the Roosters expires at the end of 2022.

The Greece international told Warrington Guardian: “We’re a well-respected club but at the end of the day, we need to win. Everything is in order ready to go but the only thing lacking is championships.”

He told The Yorkshire Post: “I’m excited about this change, moving back home to Yorkshire and I’ve settled in very nicely. We moved back last week. It’s been a breath of fresh air at Wakey; they’re really nice people and there’s a good feel to the club.”

The 29-year-old was linked with a move away at the end of last season. However, he is to remain with Brett Hodgson’s side next term, according to Hull Daily Mail.

The 31-year-old returned home to Australia at the end of last season six seasons in Super League with Salford and Leeds.

Adrian Lam won 11 caps for his native Papua New Guinea during his career, playing in two World Cups. His son Lachlan has won two caps for the Kumuls and played in the 2017 World Cup.