With the 2021 Rugby League World Cup wrapped up, we’ve taken a look at how England could line-up at the next tournament in three years time.

Shaun Wane’s England side suffered an agonising semi-final defeat to Samoa in golden point extra-time this autumn, with the latter going on to reach the final against Australia. The Kangaroos ran out 30-10 winners at Old Trafford.

With the next World Cup just three years away, we’ve taken a look at how England could line-up in France.

How England could line-up at the 2025 Rugby League World Cup:

Huddersfield full-back Pryce is regarded as one of the brightest talents in British rugby league.

The 20-year-old has scored 11 tries and kicked 56 goals in 27 appearances for the Giants since making his first team debut in 2021.

The England Knights international will join NRL club Newcastle Knights on a two-year deal from 2024. 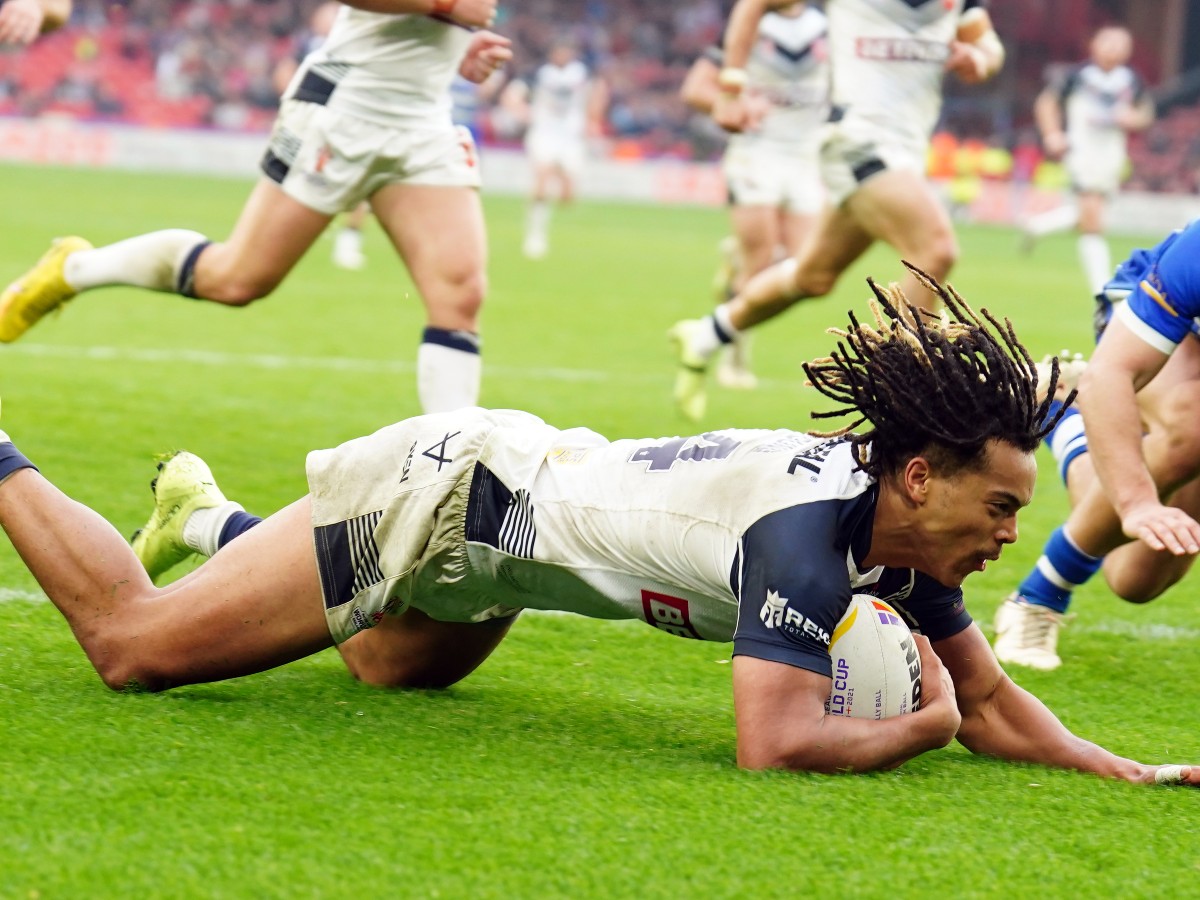 Young has enjoyed a fine start to his NRL career, scoring 18 tries in 26 games for Newcastle Knights.

The Huddersfield academy product made his international debut for England earlier this year. He has scored nine tries in five games so far for his country.

Young, who stands at 6ft 7in, could be England’s poster boy for a long time to come.

Already an elite centre in the NRL for Brisbane, Farnworth took his game to new heights this autumn by making his international debut.

The 22-year-old has four England caps to his name, scoring three tries.

Farnworth, who was once on the books at Manchester United, could be one of England’s starting centres for the next decade. 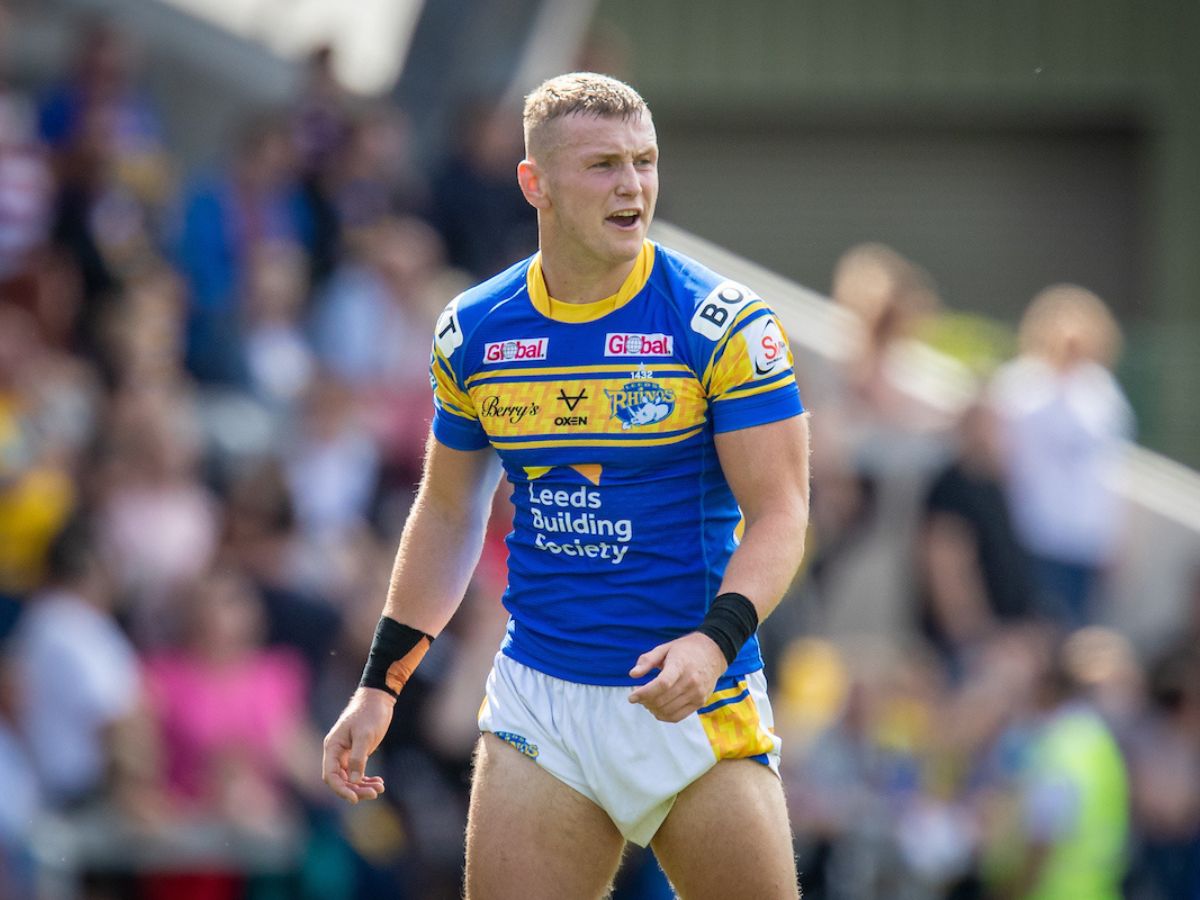 Newman is already one of the top centres in Super League despite only being 22 years of age.

The Leeds centre has already made more than 50 first team appearances, but he’s been unlucky with injuries so far.

Newman has won international honours with England Knights, but he has yet to make his debut for England’s senior side. If those long-term injuries can stay away, then you’d suspect his full international debut shouldn’t be too far away. 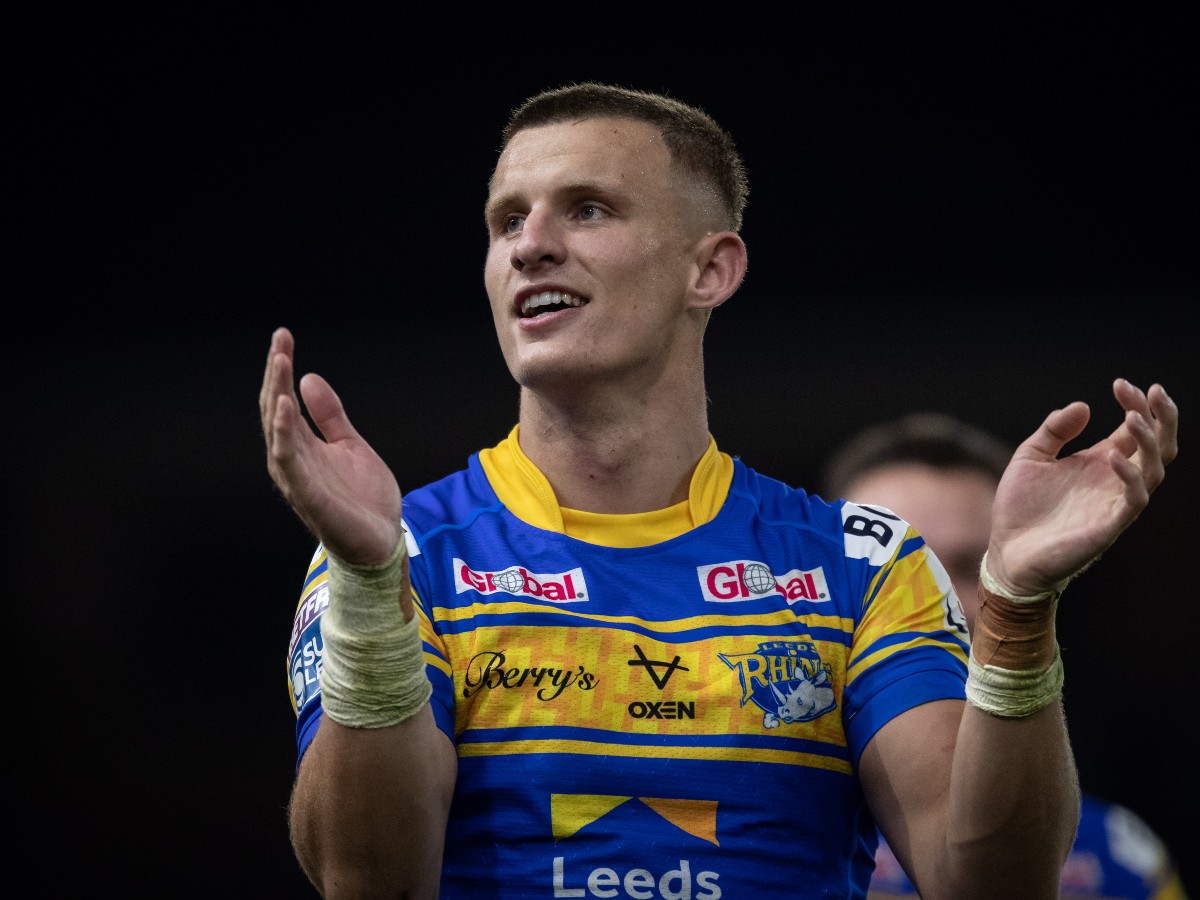 Handley is a prolific try scorer for Leeds, with 102 tries to his name in 170 appearances. Over the years, he has matured into much more than that though, with him now being a leader for the Rhinos as well as being dangerous out of yardage.

England are blessed with a number of impressive young wingers, with the likes of Tom Davies (Catalans), Liam Marshall (Wigan) and Lewis Murphy (Wakefield) coming into their prime years. St Helens flier Tommy Makinson will be 34 come the next World Cup, so he could still be in the mix too.

There’s plenty of competition for places, which will stand the team in good stead.

Full-back, centre, half-back – you can put Welsby anywhere and he’ll do a good job.

It’s hard to believe he’s still only 21 given the fact he’s played in St Helens’ last three Grand Final wins and has represented his country in a World Cup.

Welsby is another player who could be involved in the England set-up for the next decade.

Williams has just enjoyed a stunning World Cup campaign from an individual standpoint.

The Warrington half-back will be 31 by the next time the 2025 tournament comes around, so he’ll be one of the more experienced players in the England squad, having won 16 caps for his country.

Williams is a known name in both hemispheres, having enjoyed a successful spell in the NRL with Canberra between 2020-21.

If he plays in the 2025 World Cup, then Burgess will be one of the oldest squad members at 33.

Burgess has made more than 200 appearances in the NRL for the Rabbitohs and has won 34 caps for Great Britain and England.

The 30-year-old was one of England’s best forwards at the 2021 tournament, and really helped his side get on the front foot in games.

Ackers’ rugby league journey has been nothing short of exceptional. He was released by Wigan and Warrington as a youngster and worked his way up the leagues before getting a shot in Super League with Salford as a 26-year-old.

The Golborne-born hooker has since become a key player for the Red Devils. He made his international debut for England at the 2021 World Cup. 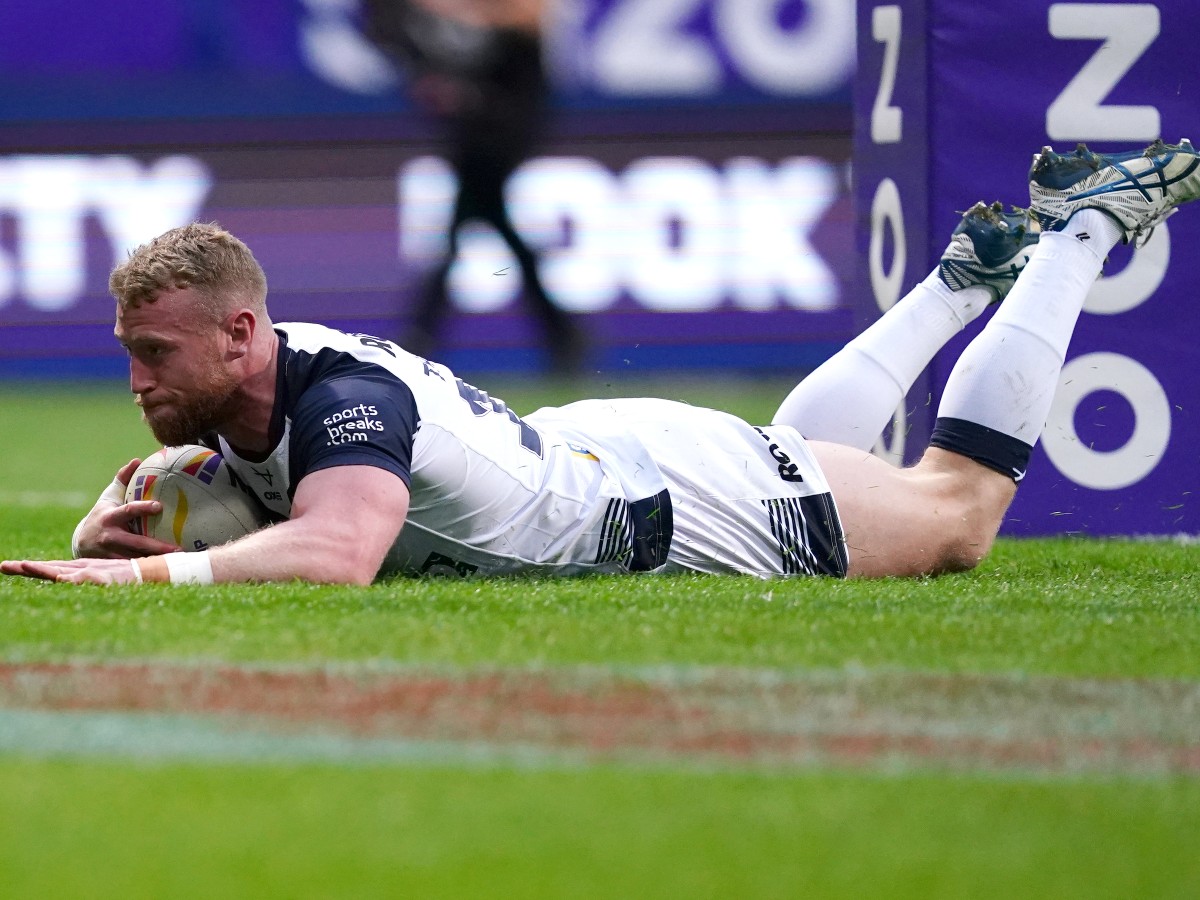 Thompson is well-known on both sides of the world. He became one of the standout enforcers in Super League with St Helens before moving over to the NRL with Canterbury Bulldogs.

The 27-year-old powerhouse has won 10 caps in total for Great Britain and England so far.

Thompson is now entering his peak years as a front-rower, so he could be even better by the next World Cup.

Pearce-Paul will join Pryce at NRL side Newcastle Knights in 2024 after also signing a two-year deal.

The 21-year-old came through the ranks at hometown club London Broncos before moving to Super League giants Wigan in 2020.

Pearce-Paul caught the attention of NRL clubs after just 38 games for the Warriors. He stands at 6ft 5in and is able to play back-row or centre. 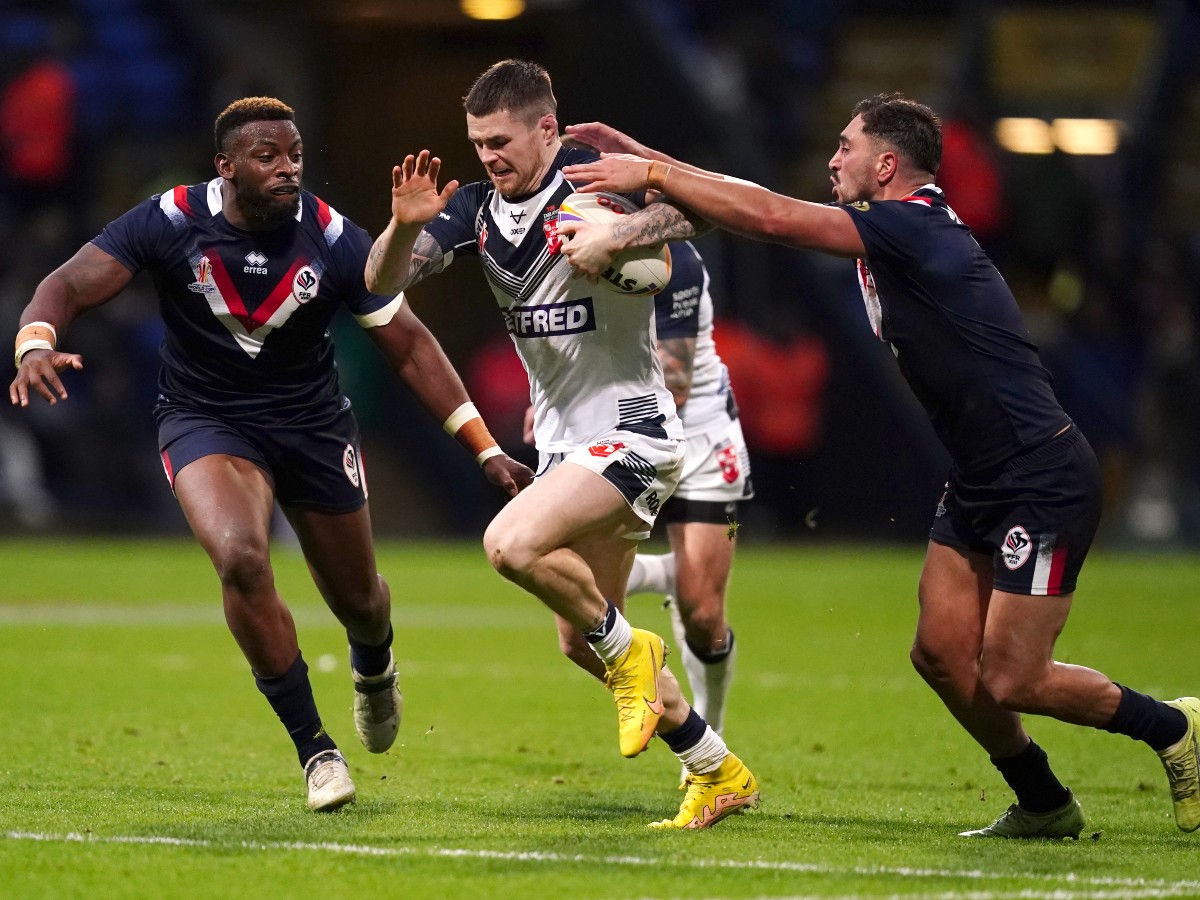 Bateman has been mainstay in the England team since he made his international debut in 2015. He has played in the last two World Cups as well as going on the Great Britain Lions tour in 2019.

The Bradfordian will be 32 by the time the 2025 World Cup comes around, so he would bring plenty of experience to the side.

Bateman has won two Super League titles with Wigan as well as a Challenge Cup and a World Club Challenge.

The Sydney Roosters forward was born and raised in Australia but qualifies to play for England through his father Nigel, who hails from Sheffield. Radley pledged his allegiance to England ahead of this year’s World Cup, winning five caps.

He has won two NRL titles with the Roosters as well as two World Club Challenges. 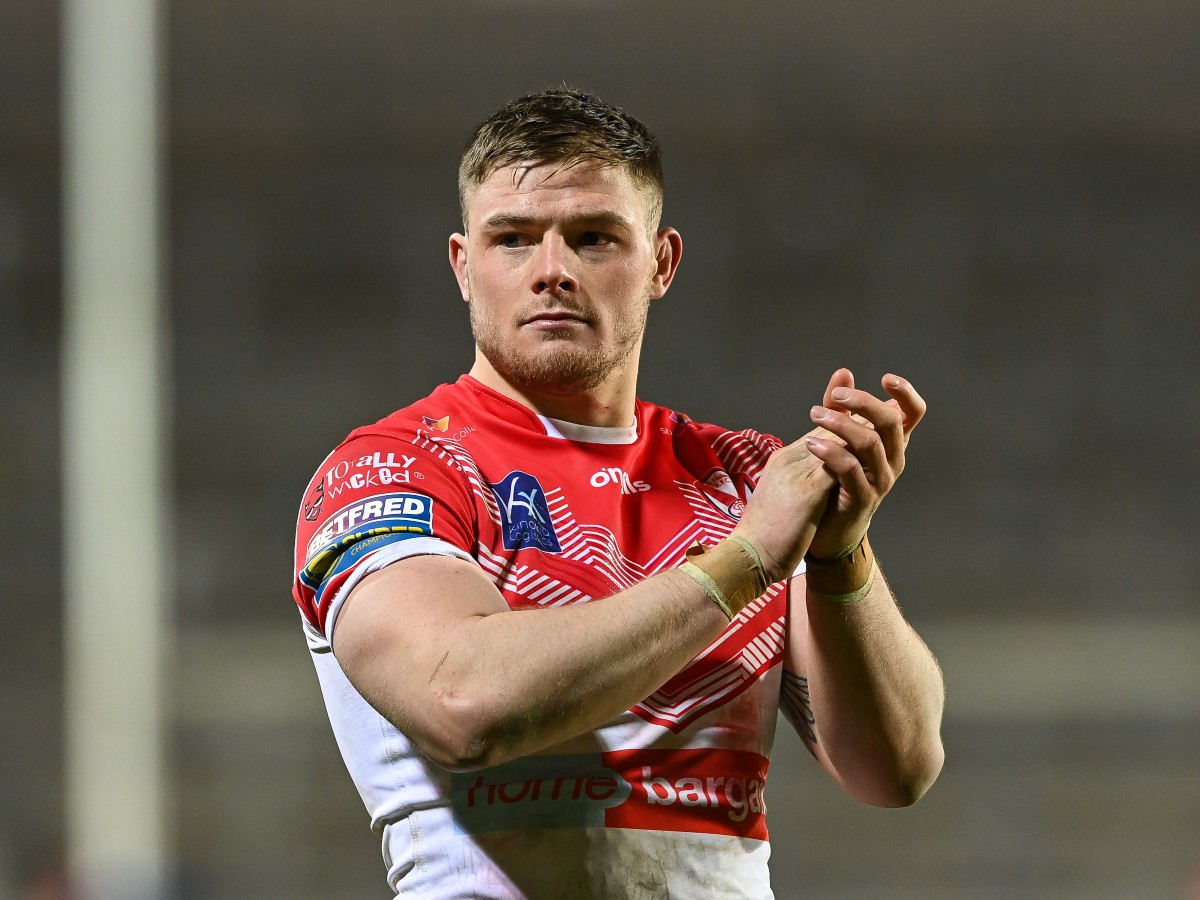 The 26-year-old has been one of the standout forwards in Super League for several years now. Knowles has played an integral part of St Helens winning the last four Grand Finals in a row.

Knowles actually made his international debut for Wales in 2015, representing his Welsh heritage at the 2017 World Cup. He switched his allegiance in 2020 to represent England, the country of his birth.

Knowles has since won five caps for England, playing in this year’s World Cup. 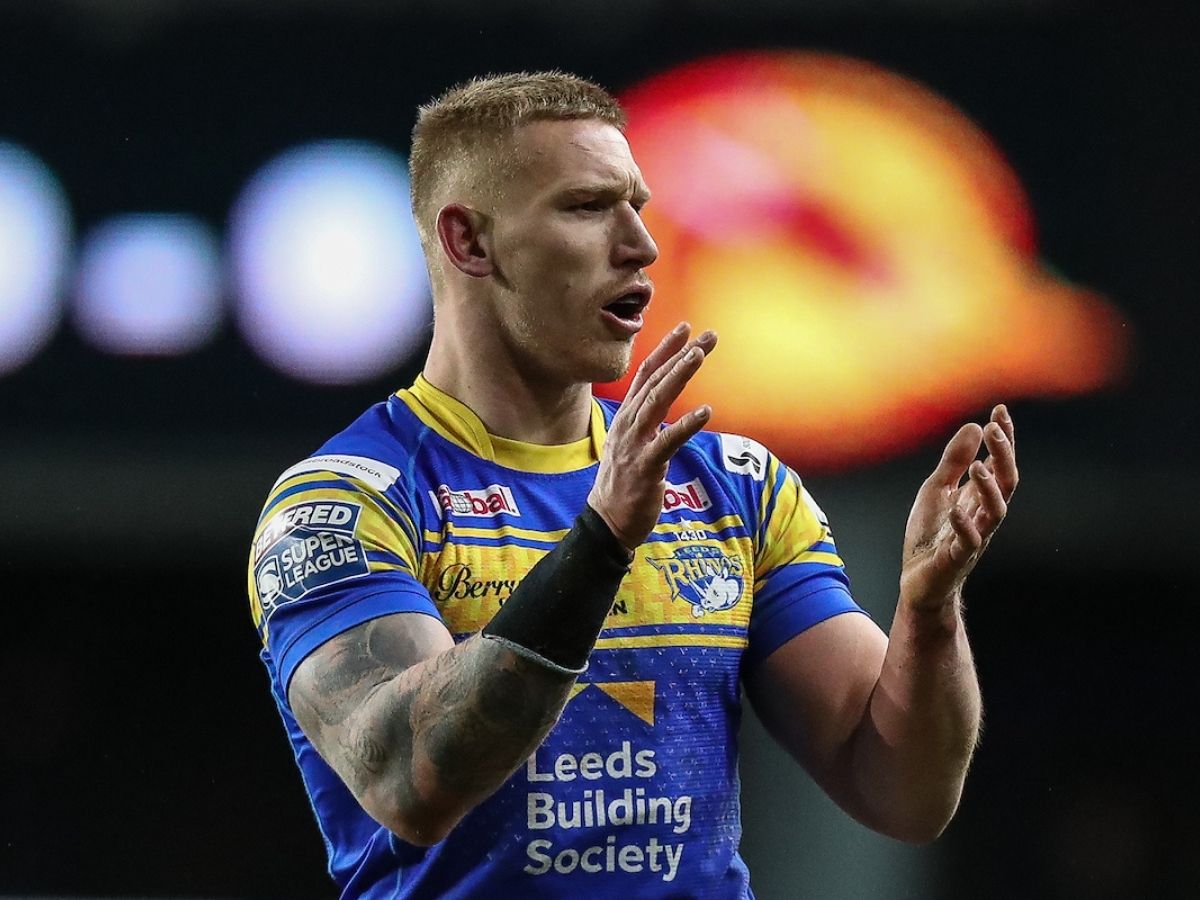 The Poland-born powerhouse has already made more than 100 appearances for Leeds despite only being 24.

Oledzki has played four games for England so far and was part of Wane’s squad this year.

With Oledzki entering his prime years in 2025, he could be a big player for England in France.

The 24-year-old is one of the best forwards at Super League champions St Helens, playing in their last three Grand Final triumphs.

Lees came through the England Knights pathway before making his full debut for the senior side in 2022.

The Rochdale-born prop won four caps for England this year and you suspect there’s plenty more to come for the hard-running front-rower. 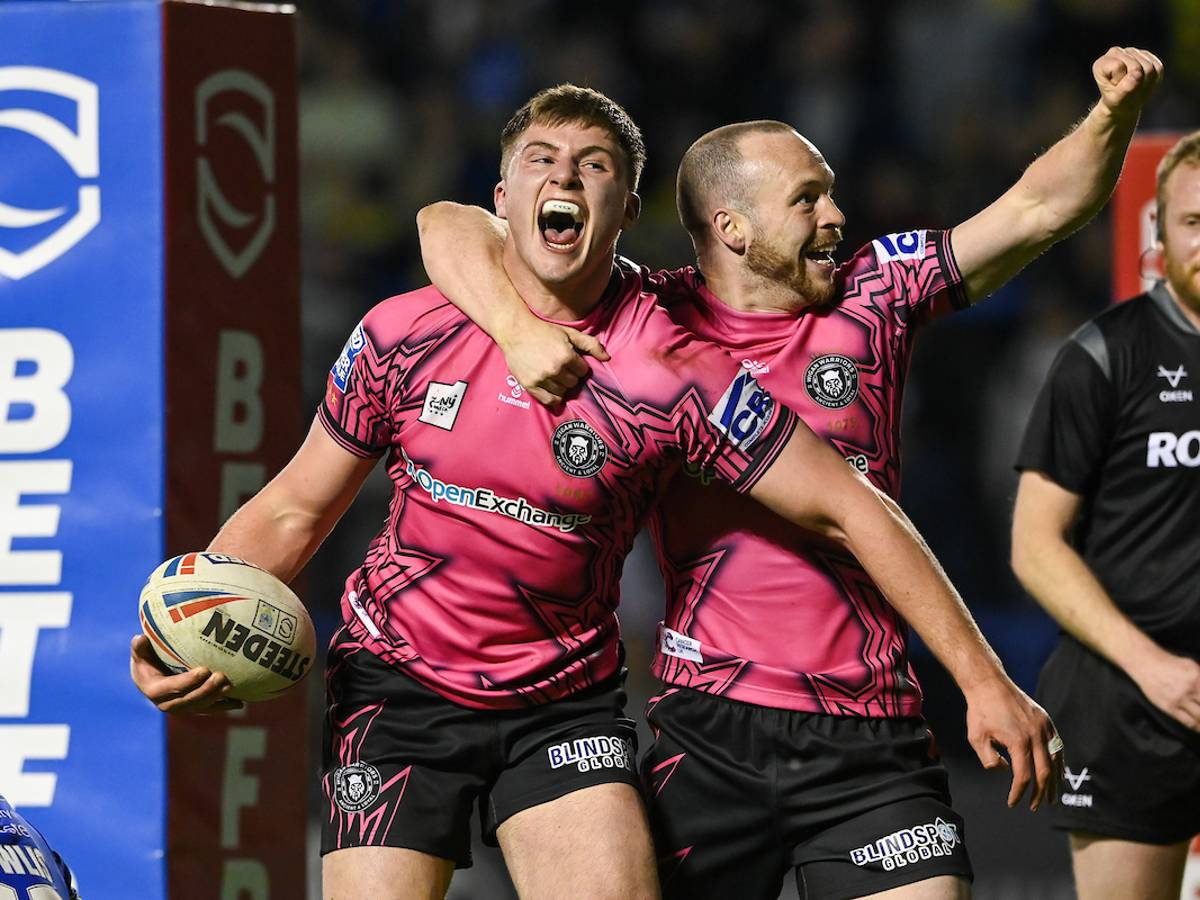 Havard was born in Bulgaria to English parents before his family relocated back to England when he was young.

The 22-year-old has already played more than 50 games for Wigan. He won representative honours for England Knights this autumn, playing in their 18-6 win over France B.

Havard has a massive future ahead of him.

It was incredibly tough to select 1-17 for how England could line-up in 2025, so it’s only right that we give a number of honourable mentions to players who would no doubt be pushing for a place in the side.

The future is bright for England, that’s for sure.

How do you think England will line-up at the 2025 Rugby League World Cup? Let us know your thoughts in the comments below.

About Drew Darbyshire 8656 Articles
Love Rugby League Deputy Editor. Joined the site ahead of the 2017 World Cup and been a full-time reporter since 2018.
Twitter