Halifax went level on points with Bradford in the Betfred Championship table after claiming a hard-fought 21-14 victory in a feisty Yorkshire derby.

In a match where the lead changed hands on six occasions, Halifax finally managed to pull away in the closing minutes thanks to Elliot Morris’ try, Steve Tyrer’s conversion and Scott Murrell’s superb drop-goal.

The result means that seven of the top eight in the second tier are separated by just two points heading into day two of the Summer Bash.

Spurred on by last week’s impressive victory over Yorkshire rivals Leeds in the Challenge Cup, Bradford made the perfect start as David Foggin-Johnston collected Ethan Ryan’s cutout ball and dived over spectacularly in the corner.

Ben Kavanagh hit back soon after for Halifax, crossing from 20m out after Murrell’s testing high kick was patted back by Liam Cooper, before the lead changed hands for a third time as Dalton Grant wriggled over in the corner for his third try of the season.

Fax edged themselves back in-front through Quentin Laula-Togagae, the full-back darting over following neat link-up play between Murrell and Dan Felming.

Nevertheless, it was the Bulls who led 14-12 at the break after two long-range penalties from the boot of Elliot Minchella.

A tight opening to the second period meant points were at a premium, but on 61 minutes, Halifax re-took the lead through Morris, the forward diving under the posts after Laula-Togagae broke downfield and passed inside to his forward.

A Tyrer penalty extended their advantage to 20-14 with time ticking away, and with the Bulls throwing caution to the wind, Murrell took the game beyond their reach with a long-range drop goal two minutes from time.

It was always going to be hard for Bradford to get themselves into the right mindset heading into this weekend’s match. Remember that just seven days ago, they were basking in the glory of a shock cup win over their fiercest rivals.

They made the perfect start to proceedings but didn’t seem to have the energy needed to capitalise on any defensive lapses when it mattered. Their perceived fatigue was epitomised by Jordan Lilley’s late kick-off at 21-14, the ball barely reaching the 45m line as he attempted a crafty short kick-off.

The challenge now for John Kear is to get his side firing on all cylinders for next week’s game against Featherstone, another side fighting for a top five spot and undoubtedly spurred on by their victory over York earlier today.

As has been the case so often in recent weeks, the spotlight was shone once again on the match officials after they opted to disallow Will Sharp’s seemingly legal try in the final minutes of the first half.

Having been fed down the right flank, Sharp dived for the line and stretched out to score. However, referee Tom Grant adjudged that the winger had spilled the ball in the act of scoring, thus chalking his effort off.

At a time when Bradford were marginally ahead, the awarding of the try could’ve given Fax a surge in momentum heading into the second period. As it was, they still had enough energy and quality to overcome the Bulls in the second 40 minutes. 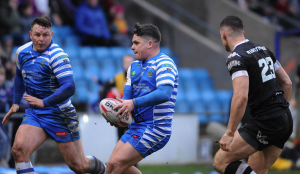 He may not be the quickest, or the most agile player in the English game. However, what Murrell does posess is experience and tactical nous that can only come with experiencing big games like this one.

The 33-year-old caused problems for Bradford, producing a horribly awkward high kick in the build-up to Fax’s opening score, before his late one-pointer completely knocked the confidence and belief out of his opponent’s.

Murrell may not be as young as he once was, but if there’s anyone you would want to steer you into the top five come the end of the season, Murrell would certainly be near the top of the list.

If ever there was a game to reinforce the competitive nature of the Championship, it was this one.

It was a tight, scrappy Yorkshire derby that showed the hard-fought battle rugby league often is, as opposed to the flashy, high-scoring games that materialised in the opening three games of the Championship’s showpiece weekend.

Neither side really did enough to record a landslide victory, although it could be argued that Bradford will feel disappointed given some of the territorial inroads they made during the second half.

This result, along with others today, has bunched the top seven up more than ever – Toronto excluded. The Championship in 2019 is arguably at its most competitive for quite some time, and given the spectacles we’ve seen so far on day one of the Summer Bash, what happens tomorrow will have a lot to live up to.