Dane Chisholm produced an inspired display as Featherstone comprehensively defeated York 42-10 to climb up to fourth in the Betfred Championship table.

The 28-year-old opened the scoring for Rovers and added countless assists as he and fellow half-back Tom Holmes stole the show at Bloomfield Road.

After a hard-fought opening quarter with very clear scoring chances, the breakthrough did come for Featherstone, as Chisholm intercepted Matty Marsh’s lofted pass and raced 80m downfield to cross, despite the best efforts of Liam Harris.

Josh Hardcastle thought he had doubled Rovers’ try tally a short time later but saw his effort disallowed for obstruction. Nevertheless, he was on hand to tee up Conor Carey just before the break after the ball was shifted quickly through the hands.

With seconds remaining in the first half, Featherstone notched a crucial third try. Chisholm was again the orchestrator, dummying his way through a gap before delivering a perfectly-weighted cut-out ball to Luke Briscoe, who stretched out in the corner to make it 14-0.

Rovers picked up where they left off after the break and extended their lead further as Holmes’ cut-out pass sent Carey strolling in for his second in the corner.

Less than three minutes later, Chisholm’s pinpoint 40/20 laid the platform for Ryan Carr’s side to make it 26-0. Following his sublime kick, the French international went even further, linking up neatly with Cameron King before sending Brad Day crashing over from close-range.

Alex Sutcliffe went over soon after in what was a carbon copy of Day’s try, Chisholm this time sending the young centre crashing over the whitewash, before Hardcastle finally got his name on the scoresheet after being found on the right flank after quick hands from Holmes.

Holmes went from provider to scorer less than two minutes later as he picked up a Harris drop-ball to stroll over.

Nevertheless, York did manage to muster some points as Perry Whiteley dived over in the corner before Joe Porter out-muscled Chisholm and Ashton Golding to score under the sticks.

Based on their performance at the Summer Bash, it wouldn’t be beyond the realms of possibility to see Featherstone claiming promotion to Super League at the end of the season.

Rovers seem to have it all. Organised by an exciting young coach in Ryan Carr, the Yorkshire side also boast a pack full of strength, determination and technical ability. The permanent capture of Chisholm now means they have all the required creativity, the half-back forming an immediate partnership with Holmes.

York never got themselves into the contest, despite sitting third in the table. Featherstone didn’t let them get a sniff of an opportunity, dominated from start to finish and now sit firmly embedded inside the top five.

First half blank proves to be York’s downfall

Any side who fail to score in the first 40 minutes of a game inevitably leave themselves with a mountain to climb, and that was exactly what transpired for James Ford’s Knights side.

A team renowned more for attack than defence, York were simply unable to find a way through the resolute Rovers defence until it was too late and must now forget about this afternoon’s contest as quickly as possible.

A play-off spot is firmly on the cards still for the Yorkshiremen, but they can scarcely afford to be played off the park in such a manner many more times in 2019. 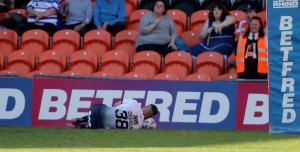 On showings like this, Bradford will be wondering why they ever let Chisholm leave Odsal on a permanent basis.

On his day, the mercurial half-back is unplayable; today was one of those days. Chisholm opened the scoring, set up countless team-mates and proved to be a constant threat, both with ball in-hand and kicking in open play.

This was a real statement of intent by Featherstone Rovers, a side that should easily finish in the top five if today is anything to go by.

York were unlucky to have some of their senior names missing, most notably Ben Cockayne, Ronan Dixon and Josh-Jordan Roberts. However, even with those players on the field, I doubt they would’ve even come close to troubling Rovers on the scoreboard.

Featherstone have now won their last three and are starting to build a bit of momentum when it matters. Their biggest problem in 2019 was their inability to beat the teams around them, most notably Toulouse and Toronto.

With a comprehensive win over York secured, they have well and truly dispelled that suggestion.