Carcassonne and other French clubs are keen to participate in the Challenge Cup once again in future, if they can find the money to do so.

Many feel like an opportunity was missed when Catalans won the competition in 2018, with attention being placed on the RFL demanding a bond for the Dragons’ entry in 2019 due to fears over the impact on the crowd at Wembley should they make the final again.

The same demand resulting in the high-profile Toronto Wolfpack not participating, while Championship side Toulouse have decided not to enter in the last three seasons.

But with the French domestic season starting in November, meaning clubs are well placed to enter alongside amateur teams in the early rounds, the potential is there for further French clubs to enter.

The problem is simple – money. Estimates are it would cost around £20,000 for clubs to play a game in England, and those costs would repeat if they were to progress in the competition.

In a wide-ranging interview with Love Rugby League, Carcassonne co-manager Frederic Camel said: “Cost is the most important thing. At the moment, it is difficult to build a big club with a lot of money. We have to be careful with every euro.

“If you need to go to England one time, two times, three times, you need to prepare for that.

“I think maybe in two or three years we can do that.”

Lezignan played for five consecutive years from 2008 until 2012, winning against Sheffield, Workington, Rochdale and Whitehaven during that period.

Limoux are another side to have registered wins, beating Gateshead and Halifax in 2004, before going down 80-20 to Wigan in front of 2,500 fans in France. They also won against London Skolars in 2010, attracting 2,000 fans to a home defeat against Leigh.

Pia played for seven straight seasons from 2003 until 2009, registering wins against Barrow, London Skolars, Keighley, Blackpool and Gateshead. They travelled to Wigan in 2008, losing 74-4. 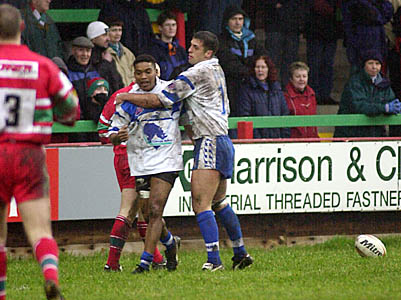 They declined an invitation to take part in 2020, as did Serbian side Red Star Belgrade, who caught the headlines by entering for the first time last season, losing to Millom.