Tonight’s Sky Sports televised clash will see The Tigers take on the Giants – in what could prove to be a high octane spectacle.

The hosts, Castleford, have somewhat flown under the radar in 2018 and are only just starting to make themselves seriously known as champion contenders.

Ever since losing to Huddersfield in July, Castleford have recorded four wins from five – the only defeat coming at the hand of the high flying Warriors in a tightly contested fixture.

Huddersfield’s late surge to make the top four seemed like the impossible coming true, but a heavy defeat to Wakefield derailed any hopes.

Yet despite the dream being over they put in a brave performance against Warrington in arguably the game of the weekend.

Question is: who will triumph tonight? 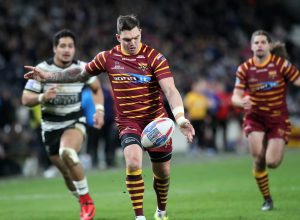 With August marking the start of a tough few weeks for the table toppers, the ship has seemingly been steadied with a gutsy ‘revenge’ victory over the Catalans Dragons in Perpignan.

Next up for the league leaders is Hull FC – a team that has run into monumental issues since securing themselves within the Super 8s.

Lee Radford will look to get another improved performance from his side – but with the return of the now controversial character Ben Barba, that might be easier said then done.

Who do you think will come away with the win? 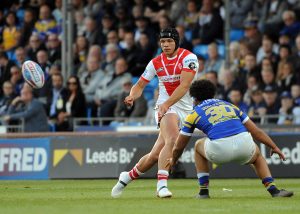 The Warriors have been in sensational form in recent weeks – wins over arch rivals St Helens and Wakefield being their most recent victories.

They now look towards fellow title rivals Warrington Wolves, who have seemingly shaken off their Wembley defeat against Catalans Dragons.

The last time these two sides met the scoreline favoured the Warriors – but only slightly!

The game finished 13-12 in a devastatingly tight clash. Question is: who will take the spoils this time around?

Top of the Qualifiers Salford will visit the current Betfred Super League champions Leeds in what promises to be a monumentally important match-up.

The side that wins this game will all but guarantee Super League status next year.

The Rhinos managed to edge past the ever struggling Widnes Vikings last week – whilst the Red Devils defeated Toronto in a game that saw Luke Burgess and new star signing Jackson Hastings receive red cards.

With those key players sitting the game out, Leeds will fancy their chances even more.

Who will come out on top on Friday?

The NRL Finals have so far delivered absolutely outstanding rugby league football and this weekends game between the Rabbitohs and the Dragons looks to be no different.

Both sides are eyeing Grand Final glory and are well within reach of being champions.

The visitors will be without their star Englishman Gareth Widdop after he sustained a shoulder injury in their victory over Brisbane Broncos.

Tune in on Saturday if you fancy a whirlwind start to your Saturday – the question is who will be successful in their quest for glory?