Hull KR half-back Danny McGuire insists that he cannot afford for nostalgia to set in when he visits former club Leeds for one last time on Friday.

The two sides are embroiled in a relegation battle with eight games of the season remaining, the Robins currently joint-bottom on 14 points and Richard Agar’s Rhinos outfit just two points ahead.

McGuire, a cult hero for his hometown club after making over 415 appearances, admits it will be a nice experience to walk out where it all began.

Nevertheless, he is determined to ensure he is on the winning side once again, having masterminded KR’s 45-26 victory at KCOM Craven Park back in April.

Speaking to West Yorkshire Sport ahead of Friday’s meeting, McGuire said: “It’ll be emotional I think.

“At the end of the day, I’ve got to come here, perform and do a job for the team.

“Because I’m retiring at the end of the season, it adds that little bit more to it, but I’ll try and do the best for the team.

“Ideally, I’d like ourselves and Leeds to be battling for top spot, but were both languishing near the bottom, which adds some extra intensity and spice to the game.”

The King of Headingley 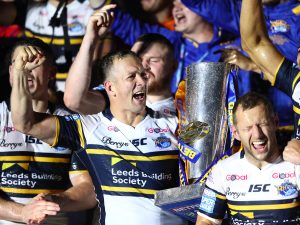 McGuire made his debut for the Rhinos against the Salford City Reds back in July 2001, having impressed for the club’s Academy side.

The 36-year-old had established himself as a first team regular by the end of 2003 and was handed a first call-up to Brian Noble’s Great Britain squad after a blistering 2004 campaign saw him score 39 tries in all competitions.

2004 also saw McGuire claim his first silverware at the club, clinching the League Leaders’ Shield and Super League Title under the guidance of Tony Smith.

Since then, the half-back has amassed a sensational 16 pieces of silverware, his last coming in the 2017 Grand Final as he waved goodbye to the Rhinos with a two-try Harry Sunderland Trophy-winning performance against Castleford.

“I enjoyed my debut, that’s always special,” the three-time World Club Challenge winner said. “I got to play with some of my idols, the likes of Iestyn Harris, Barrie McDermott and Keith Senior.

“Playing the Kiwis a few years ago [at Headingley] in an exhibition match was a great experience too.

“I’ve had some unbelievable times here and have made some great memories. Just looking out at the pitch now, it makes the hairs on the back of my neck stand up.” 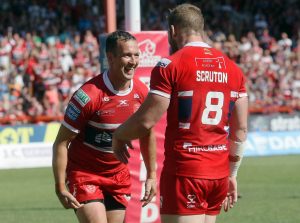 Although his time at current club Rovers has been slightly hampered by injury, McGuire has still developed into a focal point for the side, his leadership qualities inevitably coming to the fore.

Under the stewardship of Tony Smith once more, McGuire has made 18 appearances this season, scoring twice.

As he embarks on the final few weeks of his illustrious playing career, McGuire says he is determined to enjoy walking out at Headingley for one final time.

“I never took it for granted playing here; I’ve always tried to savour it and enjoy it,” he admitted.

“It’s going to be the last time on Friday so I’m going to try and do it again.”