Advantage Barrow Raiders Community Foundation is delighted to announce that two-time Olympian Caroline Alexander has joined the team as Sport and Wellbeing champion.

Born in Barrow-in-Furness, Alexander enjoyed swimming and running before beginning a career in cross-country mountain biking and road cycling, a journey that has seen her represent Britain at the 1996 Summer Olympics in Atlanta and the 2000 Summer Olympics in Sydney.

She has gone on to represent Britain across a range of competitions and events, including the UCI Women’s Road World Cup, while also representing Scotland in the first mountain-bike event in the Commonwealth Games in 2002.

Retiring from cycling in 2004, Alexander was inducted into the British Cycling Hall of Fame in 2009, and continues to enjoy a life in sport, including volunteering at a swimming club, and has now joined Barrow’s community team. 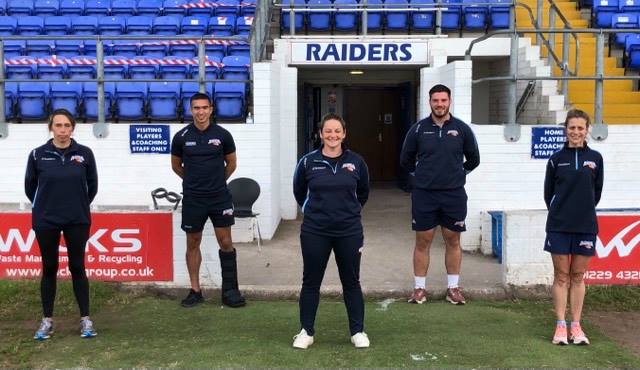 She said: “I have lived a wonderful life through sport and have competed at the highest level, and I want to help introduce children and people of all ages to a sport through this work.

“The Olympics is the pinnacle achievement for most sports, and I enjoyed the whole package of competing, including meeting different people of different cultures and backgrounds and from all over the world.

“I want to help get the community into sport. I have had a great career in sport and alongside my family, it was difficult to find the right balance and find a job, so I got involved with a swimming club and have been doing that for a number of years now, and when this opportunity at Barrow came about I was instantly interested. I want to help make a difference in the community to all people with different backgrounds.

“The rugby league itself I have been to many years ago but not in recent times until the fixture against North Wales Crusaders, it was fantastic. The advantage project put on some zoom sessions for the swimming club during lockdown, so I met Tee Ritson and Callum Bustin and started to build a picture of what’s going on.

“There are lots of projects going on and Advantage are reaching out to the community. Barrow is very strong on that. It’s been great so far going into schools and meeting kids.

“Social interaction is also huge, especially after Covid, people have not been able to socialise and some people are still quite anxious about trying to remerge so hopefully they can get in and we can help people that way.

“Life is about timing and it was a brilliant timing for me having more time and some qualifications under my belt and lots of experiences running a club in a voluntary way and then this role came along. Hopefully it’s all going to work out well, I’m very proud to be involved and want to be able to contribute and collaborate and make a difference.”

About Josh McAllister 1514 Articles
Journalist. Joined the Love Rugby League team full time at the start of 2022 having been a freelance reporter for several years. Previously media manager for Swinton and Rochdale.
Twitter