French rugby league and Catalans Dragons have received a huge boost with the news that Super League will return to French TV in 2021.

Dragons home games will be broadcast on beIN Sports, after a year without any presence in France.

It is likely to mean the Catalans home games will return to Sky Sports too.

Favourite commentators Rodolphe Pires and Louis Bonnery will return to call the games, with the first game scheduled at Gilbert Brutus against Salford in April.

Dragons fight back against Toulouse

Catalans got the better of Toulouse at the weekend as the two continued preparations for the upcoming Super League and Championship seasons respectively.

It was the Championship side that took the initiative in the first half, leading 24-10 at half time, before the Dragons’ strength in depth told as they turned things around to win 40-28.

Full-back Mark Kheirallah scored a first half hat-trick for the visitors as they took control. Josh Drinkwater’s kick bounced up off a defender for him to score Catalans’ first try and Fouad Yaha got their second, with new signing Mitch Garbutt scoring the other of Toulouse’s four first half tries.

But Catalans blew Toulouse away in the first 15 minutes of the second half, scoring four unanswered tries. Yaha added two more for a hat-trick, before Matt Whitley and Julian Bousquet completed the turnaround.

Yaha’s scores exploited the gap left by Paul Marcon, Toulouse’s France international winger who was helped off with a knee injury in what will be a worry for Sylvain Houles.

Mickael Goudemand added a seventh try for the Dragons before Hugo Pezet at least gave Toulouse the final say three minutes from time.

After breaking their winning duck for the season last week, Palau Broncos made it two wins in a row as they defeated Albi 27-10.

You wait for a win all season and two come along at once… Allez Palau!
❤💛🐴 pic.twitter.com/dOMVPP12jo

The two sides exchanged early tries but it was Palau who took the initiative and led 18-10 at half time.

The gamebreaking moment came in the 53rd minute, with a Broncos try putting the game beyond the visitors and they saw it out with a clean sheet in the second half.

In the only other game on the weekend, Limoux edged out Villeneuve 14-10 in a low scoring contest.

A penalty by Allan Torreilles was the only difference between the two sides at half-time, after Serbian prop Vladika Nikolic and Eli Levido exchanged early converted tries.

Another Torreilles penalty stretched the lead to four points on the hour mark, and a third penalty made it 12-6. James Tuitahi’s unconverted try got Limoux back within two points before another penalty proved to be the last scoring action.

Young Lyon forward Maxence Vuillermet has been given a chance in the Elite 1 Championship with St Gaudens.

A former rugby union player, the teenager switched codes for the start of the 2020/21 season but didn’t play due to the suspension of Elite 2 due to coronavirus. He has joined Julien Gerin’s squad on trial. 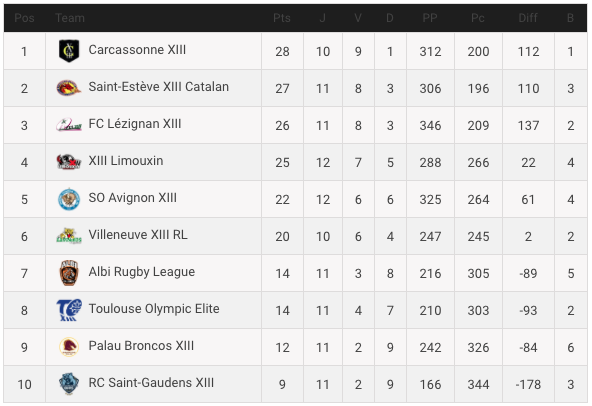