Whichever way you look at things, St Helens have been head and shoulders above every other side in Super League this year.

Victory over Wigan – their third of 2019 – ensured the Saints moved 10 points clear of second-placed Warrington with just seven games to play.

Justin Holbrook’s side have looked near-unstoppable this year – losing only to Catalans in April and London last month – and barring any remarkable late-season slumps in form, they will surely be crowned with the League Leaders’ Shield for a second year running.

Coaches, players, fans and pundits have nearly ran out of superlatives to describe how the Saints have been performing this year; but what holds the key to their success? 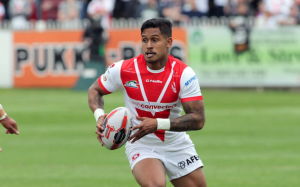 When it was announced that 2018 Man of Steel winner Ben Barba was going to be returning Down Under to join the North Queensland Cowboys for 2019, there was a sense of unease around the Totally Wicked Stadium.

How could they replace a player of his quality; a man who scored 31 tries in all competitions and notched a further 24 Super League assists. Barba made 30 clean breaks and produced 141 tackle busts, bettered only by team-mate Mark Percival last term.

The answer came courtesy of the man moved in the opposite direction as part of the Barba deal; Lachlan Coote.

The Scotland international made more than 150 appearances in the NRL and was renowned for being a shrewd yet steady operator.

Fans knew he would be a safe pair of hands, but would he be capable of changing games in the way that Barba once could? That has been answered emphatically over recent months.

Coote has slotted into the Saints backline with surprising ease. Normally it takes new recruits a little time to settle, but he and fellow close-season signing Kevin Naiqama hit the ground running straight away.

The 29-year-old fullback has picked up a combined 33 tries and assists in Super League up to now; only Jonny Lomax has more.

But it isn’t just the stats that are telling. Anyone who has seen Saints in action this year know that Coote is just as, if not more intelligent when it comes to reading the game, than Barba ever was. He is such a secure last line of defence, and that assurance gives those around him so much more belief.

Replacing Barba was never going to be a simple task, but Coote has surprised many by making that task look so straightforward. 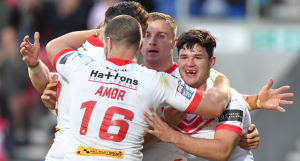 Barring any injuries, Justin Holbrook has tended to keep faith with his core group of players on a week-by-week basis, and it is that familiarity that has been such a telling factor for the Saints in 2019.

They aren’t adverse to throwing in some younger prospects when the opportunity arises; Matty Lees, Jack Ashworth, Aaron Smith and Joe Batchelor, amongst others, have all had chances to impress in the first team.

But it is the ability to keep their core group of players firing on all cylinders, especially in the forward pack, that has been so beneficial.

Luke Thompson and Alex Walmsley, two of the best props in the competition, have both played 18 games or more this year; that figure can be extended to the likes of Dom Peyroux, Joseph Paulo, Kyle Amor, Zeb Taia and Morgan Knowles.

Compare this to their nearest challengers, Warrington. On Friday, Pat Moran became the 14th different forward to appear for the Wolves this term.

Of course, it must be remembered that injuries do play their part, and Saints are reaping the rewards of having a relatively clean bill of health.

In the backline, Justin Holbrook and co have been just as fortunate. Keeping Regan Grace, Percival, Naiqama and Tommy Makinson fit for the majority of games has been pivotal for their fluidity and is one of the main factors behind Saints’ immense superiority when it comes to tries scored in 2019.

When you look across the Saints backline, it is scary to see the number of players capable of turning a game in the blink of an eye.

Coote, Lomax and Theo Fages, Saints’ trusted spine throughout 2019 up to now, have a combined 56 assists in 22 league games. Aside from that trio, the table-toppers have the likes of Naiqama and Percival on the fringes, giving their wingers the easy task of scoring so regularly.

We haven’t even taken into account Danny Richardson; a man who was so pivotal for Saints last term but has been forced to spend time on-loan at Championship Leigh and bide his time.

Across the park, St Helens have been conditioned to chance their arm when the opportunity presents itself. They may have made 268 unforced errors so far this year – more than anyone else in the competition – but that is part-and-parcel of an expansive game.

Holbrook and his coaching staff have instilled a fearless risk-and-reward brand of rugby and it has been a sheer delight to watch.

When other teams might be unsure whether to chance their arm or not, Saints have been smart and played the percentages in the right area of the field. Their forwards have laid the platform and the backs delivered the goods.

It has been five years since the Saints last won a Grand Final, but it is clear that another could be on the horizon.

It seems all Saints need to do is keep performing and hold their nerve when it counts; something which has proved to be second nature for those in a red-and-white jersey up to now.