After a week of own goals off the pitch, thank God that the two televised Super League games that showcased the sport for what it is.

Every Super League match on TV should look like those two.

It came after a week where the competition and its chief executive decided to drag out the Israel Folau issue for another week, when it just chip paper to most outside of the game.

If you have a bad PR story, it’s probably ill-advised to drag it out yourself by your own actions, and that’s what happened with the summit at Salford and the most pointless of statements issued by the apparently powerless Super League after it.

The irony is that the main man that needed to be at the meeting, Bernard Guasch of Catalans, wasn’t even present.

? "I'm excited to be back playing the game that I grew up playing."Controversial Israel Folau in his first interview after joining Catalans, the Super League club giving him the chance to resume his professional rugby career after Rugby Australia cancelled his contract last year.

The fact is that once the Dragons have opted to sign Folau, there is nothing anyone can do. Sure, the “gentleman’s agreement” has now been agreed so that the clubs apparently won’t commit to a contract with such a controversial figure in future, but let’s see how it goes when a club gets desperate to make a signing, as Catalans undoubtedly were as they looked set to enter the season without any centre options.

Rugby league is obsessed with finding the perfect players for teams in perfect locations, playing at perfect stadiums (except in Yorkshire) on the perfect TV channel with the perfect sponsors.

Regardless of who is playing or where it is, those two games at the weekend showed just why Super League should have confidence in itself and its own product.

Warrington’s win over St Helens, who were missing several key players through injury, sets a benchmark – and while some will point to the likes of James Roby, Tommy Makinson and Lachlan Coote on the sidelines, that’s hardly the fault of the Wolves, and they can only beat what’s in front of them. 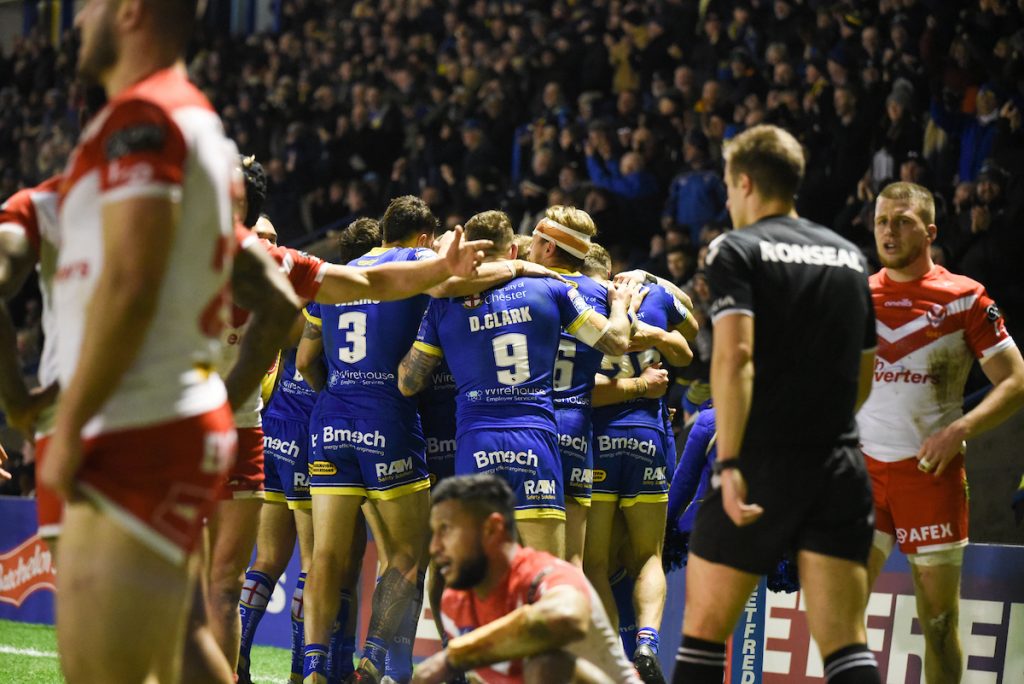 Hull KR came away from their derby defeat to Hull FC with great credit, putting in a fine display, despite their relatively undersized and inexperienced park, and scored what will surely be one of the tries of the season when Ben Crooks went over in the left corner.

Tony Smith’s side will head to Leeds this weekend full of confidence and with little to lose, much like London did last season.

The weather put paid to the two Sunday games, and what a nonsense it is that Catalans now have to find two midweeks during the season to come over to the UK.

Who at Super League has sanctioned a fixture list that pits the Dragons against St Helens in the week that Saints have to sit out league action due to the World Club Challenge? Such an obvious and basic error.

Credit to Wakefield for their efforts in trying to help Catalans by looking at the possibility of playing on Monday, though ultimately they were in vain.

Given the vociferous opposition from Wakefield chairman Michael Carter regarding the Dragons’ signing of Folau, it adds some spice to whenever the re-arranged game is played.

Storm Ciara battered the Challenge Cup schedule too, and it has left a number of League One clubs far from happy.

The RFL have decided that the games will now be scheduled for next weekend, thus postponing the start of the league campaign for several clubs.

With another Challenge Cup weekend in less than two weeks, some clubs face not starting their league campaign until March 1st, while for Rochdale, that wait extends to March 8th.

Looks like it’s now going to be 8th March before we kick a ball in League One…..

Our last pre season game was on the 12th January ?

What doesn’t kill us will only make us stronger though……let’s do it Hornets ?? https://t.co/gp3dEPkJXG

There’s a feeling that League One clubs feel like an after-thought – while acknowledging the fact that the bad weather causes a headache for fixtures, whichever way you look at it.

Fingers crossed that Wigan against Toronto and Salford v Huddersfield can prove to be occasions that put the super in Super League this week too.