Have Eamonn McManus’ comments dampened St Helens’ celebrations? Are Warrington in trouble? Here’s a look back at all the action over the weekend in a bitesize fashion.

Friday night should’ve been totally focused on St Helens’ trophy celebrations as they finally lifted the League Leaders’ Shield in front of their home crowd. After all, they are 18 points clear at the top of Super League with two games remaining. Instead, the focus was on Saints Chairman Eamonn McManus after he blasted the performance of Challenge Cup Final referee Robert Hicks in his pre-match programme notes. To even begin to question the integrity of a match official is completely wrong and a real sour note for our sport. How are we meant to deter fans from directing abuse at match officials if those at the top table of professional clubs are guilty of doing the exact same? Rather than dwelling on the utterly bewildering comments made by Mr McManus off the field, we should instead praise the Saints for their performances on it. 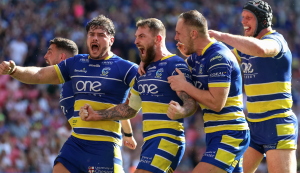 They may have been basking in the glory of a Wembley triumph, but defeat to Salford on Thursday night was the reality check that Warrington needed. Steve Price’s men have now lost seven league games on the bounce, and although they are still second in the table with a healthy points difference compared to their closest rivals, they need to transfer their Wembley heroics to league success. A five-day turnaround was certainly not conducive to a polished team performance, but with the teams below all waiting to claim a more favourable play-off draw, Warrington can ill-afford any more poor showing between now and the end of the regular season, especially with their remaining games coming against sides fighting for their lives at the wrong end of the table.

At the start of the season, few would’ve predicted that Salford – a relatively ordinary squad littered with a sprinkling of magic in key areas of the field – could have a shot of making it to Old Trafford. Those perceptions, if not changed before the week began, must certainly have shifted now. Full credit must go to Ian Watson and his coaching staff for developing a side capable of challenging at the right end of the table, despite operating without far more stringent financial constraints. With the Red Devils forward pack laying the groundwork down the middle and Jackson Hastings – surely an odds-on favourite for the 2019 Man of Steel award – producing the goods in the halves, anything is possible for a side well and truly riding on the crest of a wave at such an important stage of the season.

Written off by many at the start of the season, London have done incredibly well to sustain their fight for Super League survival until the dying embers of the season. But defeat to Leeds, their 18th of the season, means the Broncos are now two points adrift at the bottom of the table with just four competition points left to play for. With a monumental clash against Hull KR to come next week, nothing less than a win will do. Given London’s points difference is far worse than their closest rivals, even a victory at KCOM Craven Park might not be enough. However, if there’s one thing London have taught us this year, it is that they relish the tag of underdogs and are not ready to end their one-season stay in the top flight just yet.