The much-publicised paper from former Super League board member and NRL head of strategy Shane Richardson on the restructuring of British rugby league has been released.

It includes some detail from a letter submitted to NRL CEO Andrew Abdo as background about a possible investment from Down Under in the game in the northern hemisphere.

The full paper is available here.

In this article, we will break down some of the headline sections.

“The game is never going anywhere until smart independent business minds look objectively at the business, and most importantly are not bogged down by the past and vested interests , but look to invest in the future.

We have many quality people investing in the game but they, as business operators, must understand that creating a plan for the WHOLE of the game is crucial for investors, players and most importantly supporters. That is why an independent commission (IC) similar to the ARLC needs to be set up as a matter of urgency.”

This is undoubtedly the key element of the paper and is much needed. Super League is governed by the self-serving clubs within it, and although the RFL does have an “independent board”, their resources are spread thinly and they are responsible for the whole of the game in this country. They are unlikely to recommend decisions that are good for, say, Super League but are bad for, say, Championship clubs, as they have a responsibility to them all.

The biggest hurdle to this will be the existing clubs relinquishing their power – heck, they couldn’t even allow their self-appointed executive chairman to make his own decisions.

A new name for Super League

This is one that we have written about before, particularly in light of the failed European Super League movement in football. The Super League brand has become anonymous – rugby league needs to figure out a way forward. “British Rugby League” was a previous suggestion, though might seem a bit “brexit-y” these days and of course doesn’t factor in French and other overseas involvement. Utilising an acronym (like the NRL, NFL, NBA etc) may well be a better way forward.

“In my opinion there are only five clubs that are automatic in the eight from England. Wigan, Saints, Warrington, Leeds one team from Hull. The other three clubs should be beneficial to the growth of the game and the value of the business. Areas such as Newcastle, York, Wales and London stand out BUT this is for the IC to decide. Tough fair decisions will have to be made, but the supporters must feel that the decisions are for the betterment of the game, not for the political and vested interests of the past.”

Let’s be honest, the ‘one team in Hull’ comment is simply done to not alienate Hull KR fans; as there’s no way a merged team will be competing. It’s hard to argue beyond the five clubs chosen – they seem like the teams that are most likely to be able to stand on their own two feet without central funding. The rest of the current Super League clubs could quite easily be interchanged with others from outside the top flight, as long as the central funding remained. 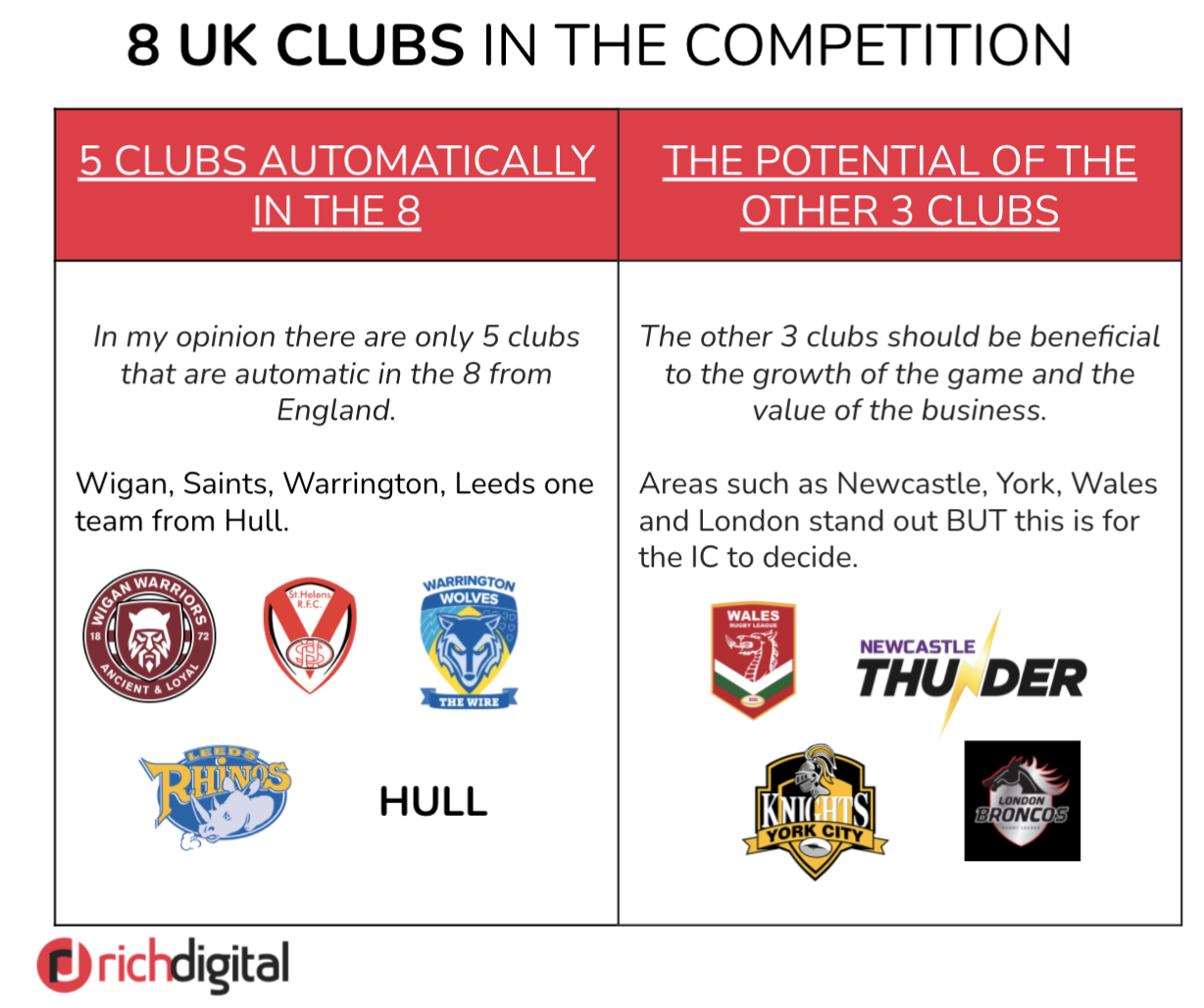 The potential other “three UK clubs” includes London – who have previously had 20 seasons in Super League and have still struggled to settle down; York – which, ultimately, is still in Yorkshire and has had a team since 1901; Wales – which was rejected for a franchise back in 1998 and had the failed Crusaders franchise though may be able to do better if operated by the Wales RL; and then Newcastle, who are becoming the most credible ‘outsider’ due to their facilities and player development in the north east.

The key part of choosing teams is how do you do it without alienating existing supporters, clubs and supporters. One of the biggest failures of rugby league’s failed expansion attempts in the past three decades has been alienating its current fans, and then eventually alienating the new fans when the expansion plans built on sand collapse.

No promotion and relegation in first two years

Some short-term pain for those not chosen, but this seems like a sensible approach – though perhaps doesn’t address potential for ‘yo-yo’ clubs (not something I personally have an issue with), or indeed protection for the overseas teams (presumably only English teams will be able to be relegated)

What about outside Super League?

“The second tier or championship as it is called should be a MAXIMUM of 12 teams – a semi pro competition without promotion or relegation. If you are unable to survive, then expressions of interest can be called for to replace them. The third tier should be an amateur competition.”

We’re heading to d-day for the semi-professional clubs outside of Super League. Those without sizeable fanbases or their own ground are simply going to be lost to the game. Even community clubs have their own facilities; and perhaps that is the reality that the likes of Swinton and Oldham have to face up to. No longer can they simply exist off central funding; they have to create assets of their own. Oldham seemed to have missed an opportunity by not developing the Whitebank Stadium facility, and have looked on while a 10th tier football team has managed it. 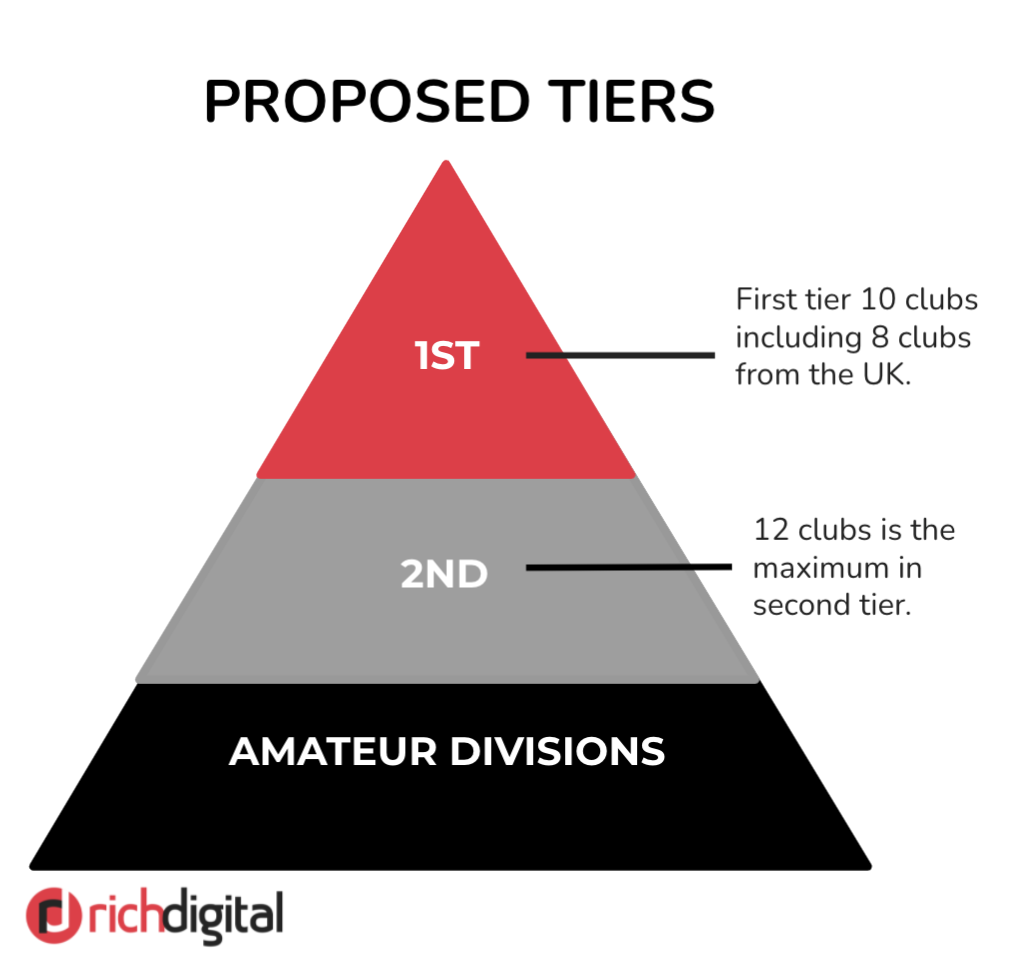 Assuming the 12 Super League teams come from the existing 36 clubs, a 12 team Championship means 12 current Championship and League 1 teams will depart from the professional game.

“The game cannot sustain more than 10 teams at this stage. To create this 10 team competition, eight should come from outside England and two external. The French sides are obvious but other expansion sides may come, in the future, but conditional on being from financially reputable organisations who can see the value of our three/five year business plan. Expansion for expansion sake is a recipe for disaster. I am sure that with two teams from France, and with the assistance of the ARLC, that we could broker a much better deal with the French media.”

France’s own ambitions may need to be considered, and that surely goes above and beyond the “British rugby league” commission.

The impact on the international game

Almost half the paper is devoted to the international game. A lot of it makes sense, such as regular series’ between Australia, New Zealand and England. 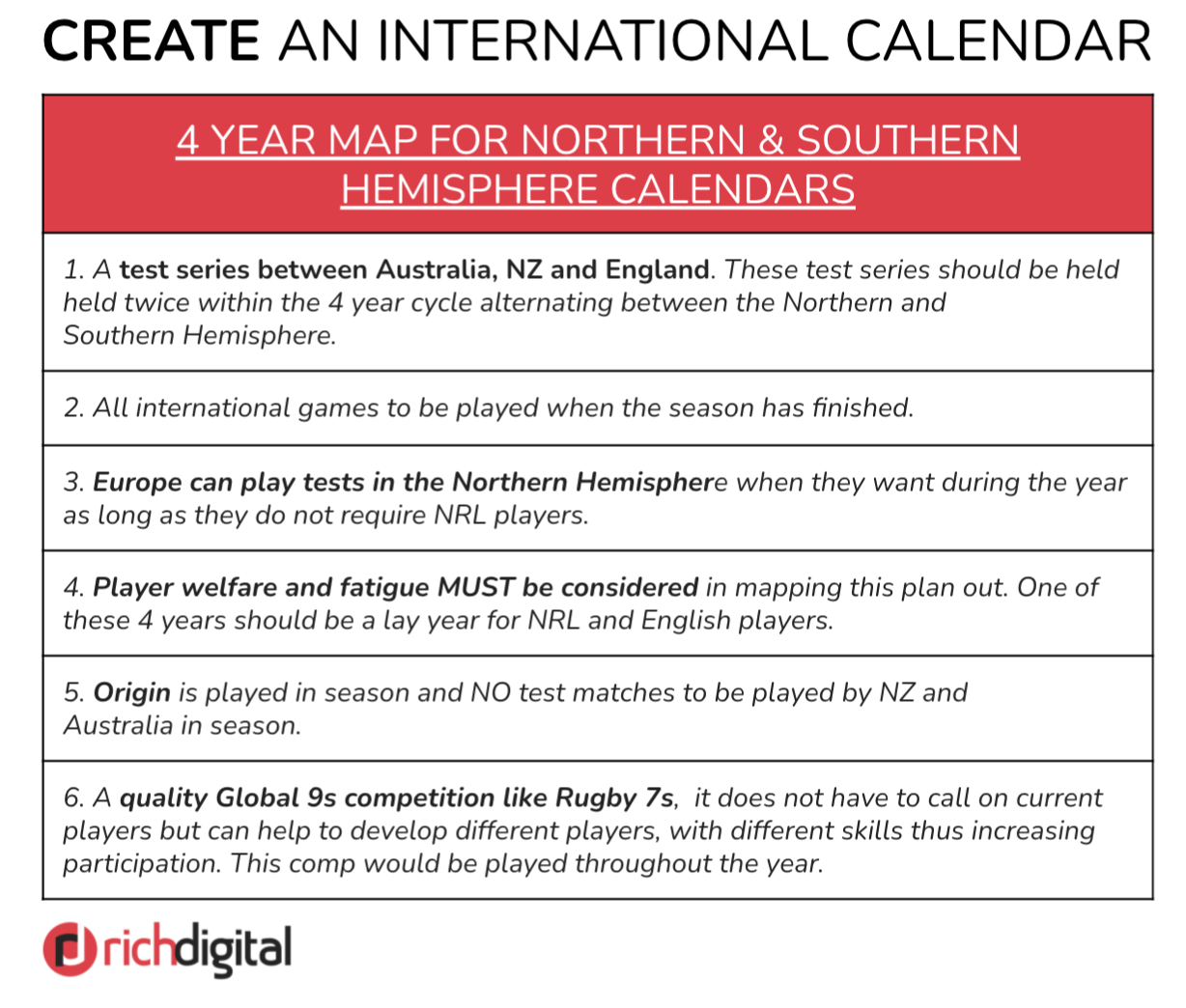 It also mentions: all international games to be played when the season has finished; Europe can play tests in the Northern hemisphere during the year but without NRL players; consider player welfare and fatigue with a rest year every four years; play State of Origin in season.

Heaven knows how much money has been spent by International Rugby League, but the much vaulted international calendar still hasn’t come to fruition, some eight years after it was meant to be top priority after the 2013 World Cup.

As a result, the international game has lost the regular test series’ – and the relatively consistent Tri/Four Nations approach that it managed for a decade up to 2016.

The trouble for “British rugby league” is how much weight it has in making Australia and the NRL to agree to it.

“International rugby league and the English game are hugely undervalued. The reason is simple; it is a divided and decaying sport. It requires a laser-like approach to establish a business plan that everyone gets behind.

It needs a clear leadership model to establish an axe head to approach the right people in the business and rugby league world. It needs to establish true corporate governance, so that it can carry out with credibility the plan that is created by the IC.

People NEED to know who is in charge and in control to negotiate. Once we get that investment, it cannot just be wasted on giving it all to the top tier, but to the vision of growing the WHOLE game.

If investment grows so will revenue and that will assist the top tier. It is the golden egg for the media. But the media want a partner that has vision and a future they can grow with and invest in long term.”

Someone needs to be put in charge with a mandate to implement a strategy over at least a 10-year period.

Whether those at the top want to relinquish their control for the sake of rugby league, remains to be seen.

Born winners, headline makers and new beginnings: what to look out for when Super League returns

With Super League XVI just around the corner, here are a few things to keep an eye on after an eventful off-season.  [Read more…]

Toronto Wolfpack head coach Brian McDermott has admitted his club learned some harsh lessons during their first aborted Super League season as he launched an impassioned plea for a second chance. [Read more…]

O’Loughlin to have operation