Warrington recorded their second win of the season, but were pushed all the way by Toronto Wolfpack at the Halliwell Jones Stadium.

Ben Murdoch-Masila’s 79th minute try ended the Wolfpack’s battle to secure a 32-22 win, after they had fought from 16-0 down to level the scores at 22-22 heading in to the final quarter.

The Wolves had the better of the first half and had led 22-6 before a try right on half time gave Toronto impetus, and they provided a stern test to Steve Price’s side as they proved how competitive they can be despite the criticism they have received in recent weeks.

Warrington were looking to feed off the energy of a strong home crowd, keen to see a repeat of a fortnight earlier where they had despatched of champions St Helens 19-0.

Steve Price shuffled his pack again, bringing back Matty Ashton at full-back after receiving criticism for dropping the highly-rated youngster in the defeat at Wakefield, Jake Mamo making way with Stefan Ratchford switching to the centres.

And the Wolves started brightly, crossing for the first try on seven minutes when a Daryl Clark break created space for Ben Murdoch-Masila’s quick hands to find Josh Charnley on the overlap.

That triggered a purple patch for the hosts and they soon had a second try, quick hands on the left this time sending Tom Lineham away and he put Gareth Widdop over on the inside for a try on his home debut.

It took 17 minutes for the first Wolfpack attack of note, former Wolves back-rower Bodene Thompson knocking on over the line after a neat move to the left.

They had a try ruled out five minutes later, Liam Kay stripping the ball from Toby King one-on-one off the back of a Wolves defensive scrum, only for the referee to correctly call the ex-Leigh winger back for a knock on in the process.

Warrington countered and went up the other end to score a try, King atoning for his error by sending Lineham flying away close to the left touchline and he ran over full-back Tony Gigot, the Toronto trialist who had garnered much attention prior to the game, for 16-0. 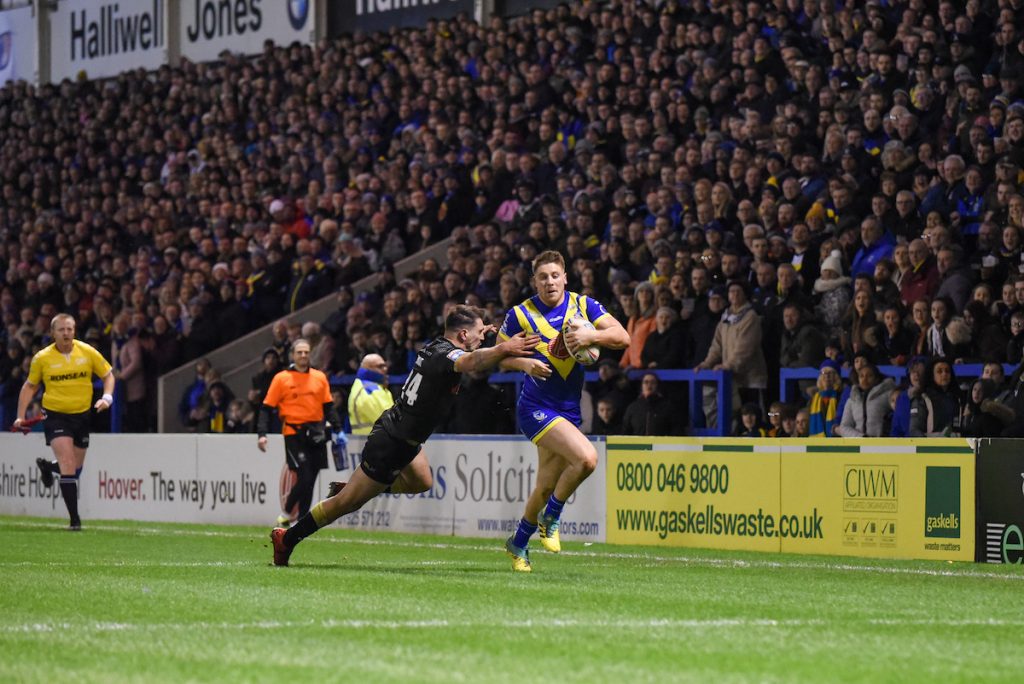 But Toronto then enjoyed their best spell of the game, as they sought a way back in to it. Charnley dropped Gigot’s kick off and from the resulting field position, Ricky Leutele was held up inches short by Ratchford.

On the half hour mark, Charnley pulled off a miraculous try-saving tackle to deny Russell in-goal after Leutele’s quick hands had got him all but over, but eventually Toronto would break Warrington’s resolve, Jon Wilkin diving over from close range after Sonny Bill Williams had drawn in a few defenders on the right.

The Wolfpack threatened back-to-back tries as Blake Wallace, shifted to right centre to accommodate Gigot, broke away down the right and was hauled down by Lineham – but Warrington again countered and would score moments later, the recalled Ashton showing Josh McCrone a clean pair of heels to romp home from 40 metres for 22-6.

Toronto would go in to half time within two scores though, in controversial fashion – McCrone got stuck behind a Warrington play the ball, and though he seemed to clearly obstruct Widdop at dummy half, play went on, and when the ball came loose, King tried to tidy up with a pop up pass only for it to be intercepted by Andy Ackers for a gift of a score on the hooter.

That provided the ammunition for a Toronto fightback, and they put in a fine second half display to take the game to the home side.

A sharp move left resulted in Russell crawling to the line on the left before diving over for 22-16 and then on 56 minutes, Josh McCrone surged through the middle and found Gareth O’Brien on his left shoulder to bring it under the posts for a tied game.

Warrington were rattled, and lost Ashton to what looked like a hamstring strain, but they steadied the ship, and after knocking back a chance to take a drop goal on 61 minutes, they went one better than that on 65, when Ratchford tagged over a penalty from dead centre after O’Brien was penalised for holding down Widdop.

A further penalty five minutes later was added by Ratchford to give a four point cushion, but the Wolfpack were very much still in the game.

Back-to-back penalties got them on the Wolves line, and it took a fine tackle by Charnley in the corner to deny Hakim Miloudi with five minutes left.

That proved to be the last throw of the dice from the visitors, and Warrington made sure of the points with less than two minutes remaining, Murdoch-Masila marching on to a short ball from Blake Austin, with Ratchford nailing the conversion to bring up 1000 career points in Super League.