In a not-so-alternate universe, Tui Lolohea isn’t playing for Leeds Rhinos in 2019. He’s in prison with some of his childhood friends.

Lolohea was brought up in Avondale, a suburb of Auckland in which young professionals and families are now starting to buy houses and settle down. It was a lot different when Lolohea lived there, though. “It was real rough back in the day,” he chuckles now.

“There were lots of local gangs and all of that. My street had a gang named after it, so I’d seen it all when I was little. But now you see people buying houses along my road. You don’t see as many gangsters. It’s changed a lot.”

Unlike some of those friends he would hang out with by Avondale canal, Lolohea isn’t in prison. He’s playing rugby league on the other side of the world for a living. He’s represented New Zealand at international level and played for Tonga in a World Cup semi-final. And one of the main reasons for this switching of the script is his father, Paul.

Lolohea’s mother, Rachel, tragically passed away when he was just one-year-old due to a heart condition. And so Tui and Paul were left to fend for themselves and look after each other.

Paul was a welder before later becoming a security guard, often working as a bouncer at Auckland nightclubs until the early hours of the morning on weekends. By this point Tui had already been bitten by the rugby league bug, meaning Paul would return home at 7am and drive his son to his 9am kick-offs.

On one occasion Paul had to stop driving three times in order to pour a bottle of water over his face to try and fight off exhaustion. On other occasions he would grab some much-needed sleep in his car while Tui was playing.

“My dad was a bit of a gang member as well,” Lolohea says. “Obviously they knew who he was so they would look after me a little. If there was any trouble around I felt safe. That was a good thing because I could do whatever I wanted.

“My dad was a solo parent and done it all on his own pretty much all the time. He’s been a big part of my life and still is a big part of my life, and will be until the day I pass away. The sacrifices he made to put me in this position and be who I am…it was hard for him but we got there.”

At a young age it soon became apparent that Lolohea was destined for big things and those with a betfair sign up promo code would have been tipping him for the top. After joining the New Zealand Warriors at 18, he was named the Junior Warriors’ Player of the Year in his first season having scored 22 tries in 28 games.

An exciting, unpredictable runner of the ball with a devilish short kicking game, it’s no surprise to learn who he aspired to copy when he was growing up.

“When I first started it was Benji Marshall. Then as I went on it became Shaun Johnson. I’ve actually been blessed to play with two of my idols. How cool is that? You don’t get that often in rugby league.”

A year later, he was making his NRL debut off the bench against Manly at Mt Smart Stadium. With his first touch he almost broke the line, but his opposite number, the wily Kieran Foran, spotted the rookie in his first game and began sending big traffic down Lolohea’s flank to test out his defence.

“Mate, I was so fatigued within that first five minutes. The adrenaline was just pumping. I didn’t start, and when I was warming up off the bench I was just like, ‘Wow!’ Just buzzing! I could hear my mates behind me yelling, ‘Yeah Tui, let’s go!’ I was just like, ‘Man, this is happening!’

“I think I was lucky because when I got called up for my debut I found out the day before so I didn’t have a whole week to prepare and build up and be nervous. I pretty much just slept and woke up the next morning ready to play.”

Come the end of the following season, 2015, Lolohea had established himself as one of the most exciting young players in the NRL. His rapid rise culminated in a New Zealand call-up, playing in a tour match against Leeds at Headingley and the first Test of the series defeat against England. But then that rise ground to a halt. 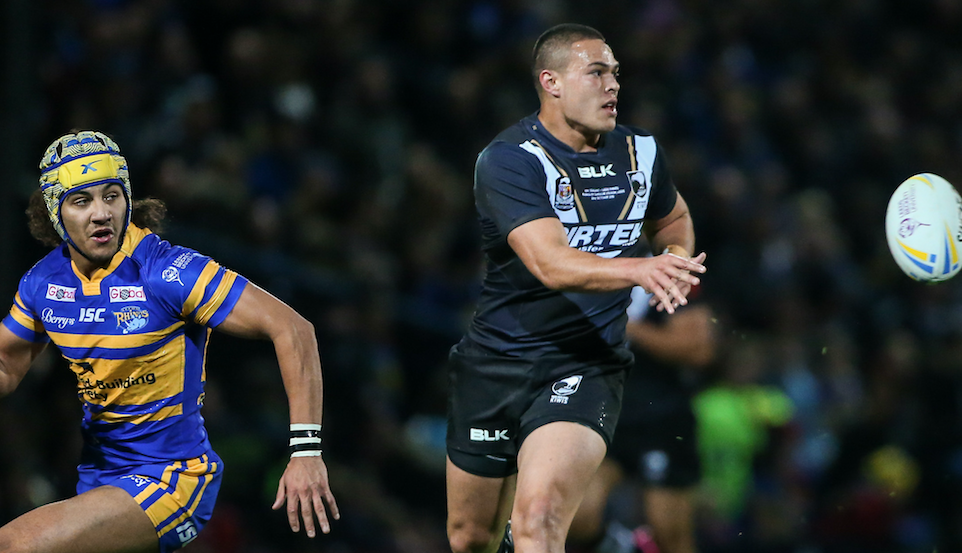 With the Warriors he had played as a half-back, full-back, centre and winger. Coach Stephen Kearney viewed him as a specialist right winger. It was a position he had never been deployed in prior to breaking into the first-team, and a position he had little interest in playing.

His form suffered, and then four games in the 2017 campaign he was dropped to reserve grade. After securing a mid-season move to West Tigers, Lolohea told the Sydney Morning Herald he had struggled with his weight towards the end of his time with the Warriors, admitting to “drowning my sorrows” with alcohol.

Naturally a bigger frame than many half-backs, he now says: “I was going through rough times and I was doing things out of the ordinary that I don’t usually do and I put on a bit of weight. It’s been a bit of a rollercoaster. It hasn’t been the best, but I’m looking forward to building and getting better as a player.”

The move to the West Tigers allowed Lolohea to secure his international place for the 2017 World Cup. But he wasn’t representing New Zealand. He was instead among the host of big names to switch allegiances to Tonga, the country where his father was born and raised.

“I grew up in a Tongan way,” he says. “I grew up learning my culture and speaking my culture. I’m fluent speaking in Tongan. It’s pretty cool. When Tongans hear me speak Tongan they’re like, ‘Oh wow!’

“When we went back there for the World Cup we went to villages outside of the city that are out in the bush and what you see there, man, it makes you appreciate your life. I’m just so grateful for what I get and how we live.

“You look at them and the struggle is real. They’re living off crops and plantation and things they grow out of the ground. They don’t earn much money. It’s hard. But one thing I do know is we’ve got a lot of heart and passion for our country, as people will have seen during the World Cup. That’s just as good if not better than money.”

Tonga, and Lolohea, were nothing short of a revelation at the World Cup. He was instrumental in their 28-22 defeat of New Zealand, scoring a try as they became the first tier-two nation to beat one of the top countries. And he was once more among the tryscorers as they almost pulled off an outrageous comeback in the thrilling semi-final against England, only to agonisingly fall short, ultimately losing 20-18 due to a controversial decision to disallow an Andrew Fifita score right on the hooter. 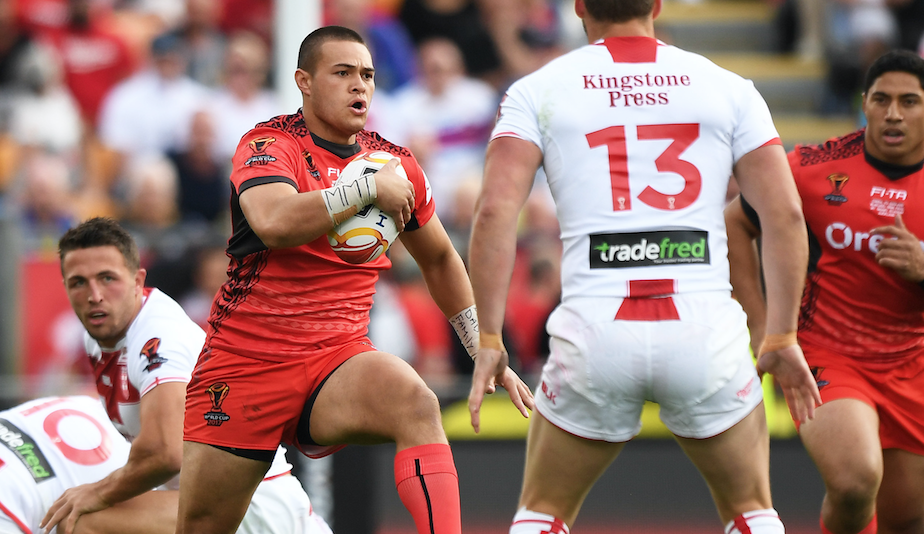 The tournament established Tonga as one of the most exciting rugby league stories in recent history and showcased the potential of the international game. Lolohea made such an impression that he was gifted some land in the country alongside Jason Taumalolo by one of the chiefs from their local village.

“It’s crazy. It’s actually opposite my house where my family grew up in Tonga. Me and Jason live on the same road pretty much. It’s a bumpy road of course!”

But, as has been a theme throughout Lolohea’s short career, such a high was followed by a period of frustration. Injuries prevented him from fully nailing down a position at the Tigers in his first full season with the club and it became apparent his future belonged elsewhere.  There was interest from other NRL clubs, but the 24-year-old instead made the brave decision to swap Western Sydney for West Yorkshire.

His partner is half English, with family who grew up in Blackpool, but had never visited the country prior to their winter move to the other side of the world with their two young children. The transition has at least been made smoother by a couple of familiar faces, with Lolohea attending the same school as prop forward Nate Peteru.

While we’re chatting, fellow new signing Konrad Hurrell walks past pulling faces to try distract Lolohea, and anyone who follows either of the duo on social media will be have seen plenty of videos of them joking around, usually accompanied by the high-pitched laugh of Hurrell. The centre’s bubbly personality seems as big as his tank-like frame, but Lolohea simply describes him as “an idiot”.

The two players are almost rugby league siamese twins, with Hurrell already settled at the Warriors as Lolohea broke into the senior side and another star of the Tongan World Cup squad. But Lolohea had no inkling he would be joined by his mate at the Rhinos.

“He was dropping hints to me but I thought he was lying. I thought, ‘There’s no way. You’re going good at the Titans. You seem happy over there.’ And then it wasn’t until the week of the Tonga Test against Australia, he wasn’t at something and they said he’s gone to sign his contract. I was like, ‘Oh shucks! That’s good!’” 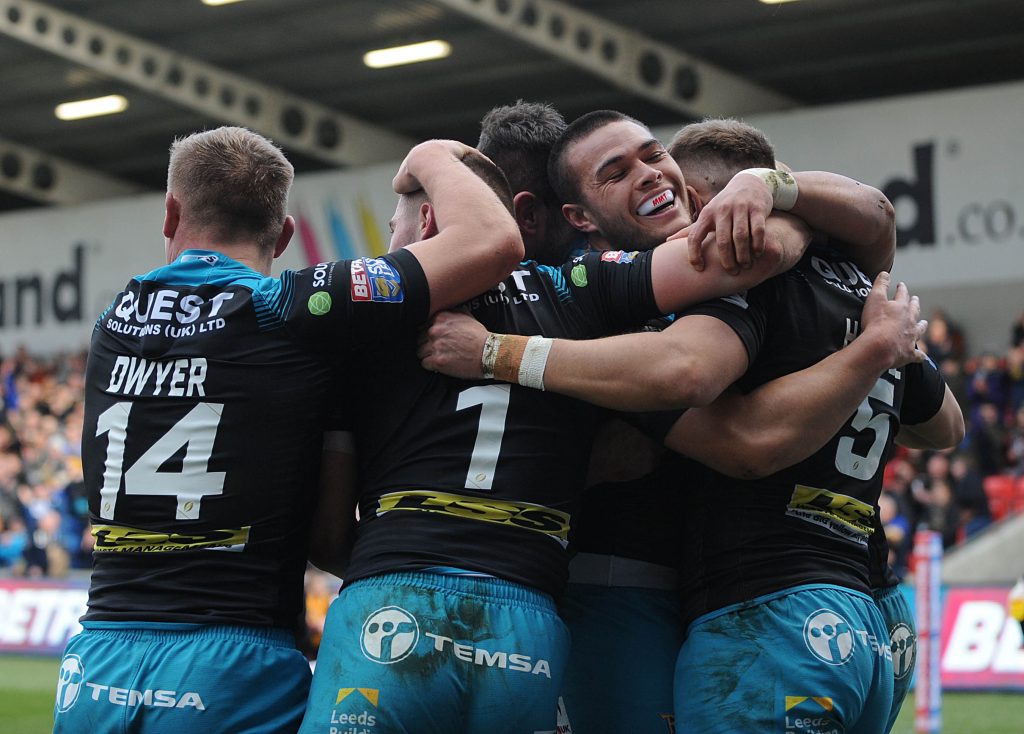 Their arrivals in England have been a part of a wider influx of NRL stars joining Super League for 2019, with Trent Merrin another headline arrival at Leeds. In an interview with the Yorkshire Evening Post, Merrin himself admitted he had been given a “kick up the backside” after being surprised by the quality on show after a pre-season game with Castleford Tigers, and Lolohea echoes those sentiments.

“I’ve found it hard. I think there are probably just different periods of games where probably the NRL is just that little bit better in that department, but I think the game’s growing here and the more NRL players coming over here is going to help the game get better.”

Leeds have endured a tough start to the season, losing at Warrington, Wigan and St Helens while picking up a win at Salford. But Lolohea, much like the whole team, has slowly grown with each performance, particularly standing out in the victory against the Red Devils.

“If we continue to play at that level we’ll continue to put teams under pressure. One thing I’ve heard over here is that Leeds have always got a target on their head and every team gets up against Leeds. Every week you’re going to get bashed around because everyone always wants to beat Leeds.”

Lolohea may have only been in England a couple of months, but it’s good to know the man who has tapped into his Kiwi and Tongan cultures already understands the traditions of his new home.