Toulouse are exploring options to play a handful of ‘home’ games in the UK, as a result of the ongoing coronavirus restrictions.

Their first home game of the season against London Broncos was cancelled, after the Broncos refused to travel, and the French club were awarded a 24-0 win as a result.

Their next home game, scheduled for this Saturday against Featherstone, has also been postponed, though unlike London, Featherstone as a part-time club will not be forced to forfeit the game, which can still be re-arranged for later in the season.

Toulouse have three further home games scheduled for May – against Widnes on May 8, Swinton on May 22 and Newcastle on May 29.

Part-time clubs are not being forced to travel to Toulouse under the current government restrictions, which require elite sport athletes to quarantine for five days and then submit a negative test. The clubs successfully argued that this wasn’t practical for part-time players.

Full-time players also have to quarantine, but are allowed to train in their squad bubble at the same time.

Prior to the change in restrictions before the start of the season, officials were trying to align fixtures so that Toulouse could travel to the UK with Catalans to help minimise costs.

Catalans are due to play Warrington in the Challenge Cup on Friday May 7 at Headingley, the day before Toulouse’s scheduled fixture with Widnes.

Four lengthy suspensions handed down to officials at Palau and St Gaudens have been successfully appealed, prompting the resignation of five officials involved in the disciplinary committee.

Guy Surrell, the chairman of the committee, and four other members have resigned as a result. The suspensions came after complaints were made by Toulouse about player eligibility.

St Gaudens coach Julien Gerin said after their win at the weekend: “I savor this victory because the players went to seek it with the values of honesty and courage that drive this club and the people who have always constituted it.

“I would like to point out that all the people who were incriminated during the Toulouse Broncos claim were cleared and are therefore cleared of all accusations and were therefore able to participate in this match, just like the Palau coach also cleared of the accusations of Toulouse Broncos. My comment, you will understand, follows the embezzlement on the part of the leaders of the TO Broncos.”

BIG GAME: Rugby League was once huge in France, why can’t it be huge again?

Bottom-placed St Gaudens won a thriller 23-22 away at Palau, in a weekend where three catch-up games were played. Man of the match Thibaud Marty kicked the winning drop goal.

St Esteve kept up the pressure on leaders Carcassonne with a 42-22 win over Albi in their game in hand at the weekend. Tiaki Chan’s hat-trick helped Justin Murphy’s side turn a 26-10 half time lead in to a relatively routine win.

Lezignan jumped up to third with a comfortable 38-4 win over Villeneuve, who continue to struggle despite having their play-off place secured and their coach Olivier Janzac said the performance was “embarrassing.” 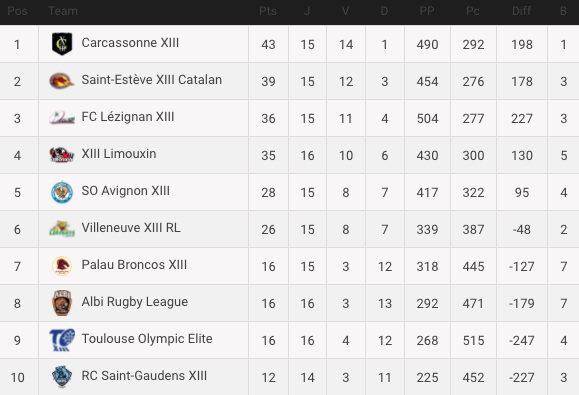