Toronto opened up a six-point gap at the top of the Betfred Championship table after ruthlessly dispatching Toulouse 42-14 in the opening game of the Championship Summer Bash.

Chase Stanley picked up a hat-trick at Bloomfield Road as Brian McDermott’s side sent out a  real statement of intent to the rest of the league with a seven-try romp.

Having inflicted a 46-16 defeat on the Wolfpack when the sides last met, Toulouse hit the front once again courtesy of a Mark Kheirallah penalty goal after just 10 minutes.

However, the table-toppers quickly found their rhythm and crossed twice in the space of nine minutes, Gareth O’Brien finishing off a lovely sweeping move from left to right and Josh McCrone collecting a Joe Mellor grubber kick under the posts to make it 12-2.

Having scored himself, McCrone quickly added two assists to his name, putting Stanley through a hole for his fourth try of the season, before setting up the New Zealand international five minutes later after a lovely wrap-around with Andrew Dixon.

Trailing 22-2 at the break, the French side reduced the deficit as quick hands from Johnathon Ford and Mark Kheirallah sent Joe Bretherton over in the corner.

Nevertheless, Darcy Lussick twisted his way over from close range to restore their four-try cushion, and Stanley dived over in the corner to complete his hat-trick three minutes later and put the game beyond doubt.

With time running out, Bob Beswick’s looping pass found Nick Rawsthorne to score in the corner, while Gareth O’Brien added a further two points with the boot.

However, Toulouse had the last say as Rhys Curran stretched out over the line in the final minute to complete the scoring.

Toronto at their best

Some players may be fazed by a top-of-the-table clash, especially with Toronto facing the prospect of going clear at the top of the division.

However, they played with real confidence and conviction, the final score suggesting the contest was closer than it actually was.

The Wolfpack boast one of the best forward packs in the competition, with Darcy Lussick and Anthony Mullally real standouts in this contest. It looks certain like Toronto are going to be in the final five come the end of the season, and with their squad looking more polished as the weeks go by, it certainly appears to be exciting times ahead.

Admittedly, Toronto’s attack was very sharp and clinical throughout, but Sylvain Houles’ side were their own worst enemies at times.

Defence proved to be a stumbling block when it came to last year’s Middle 8s Qualifiers – the French side conceded 190 points in just seven games, with only Halifax conceding more – but on the basis of today’s game, line speed is proving to be a major issue.

Olympique held their shape well in defence, but with the line not moving forward with any real speed, their opponents were able to make far too much yardage and put themselves in a position to score on numerous occasions.

Better sides than Toronto will exploit their lethargic defence to a greater degree. If their defence doesn’t move forward with more intensity heading into the second half of the season, Toulouse’s hopes of a Super League place may look a little out of reach. 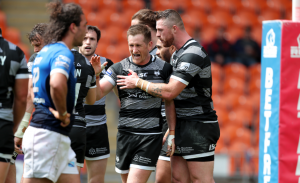 Despite the outside backs picked up the majority of the headlines, McCrone proved to be a classy operator in the heart of the Wolfpack engine room.

His link-up play with Mellor and O’Brien was superb throughout, the trio causing numerous headaches as they switched the play from side-to-side with ease.

Since making the high-profile move to join the Canadian outfit, McCrone has been a real leader in the side, and exemplified just how integral he will be as Toronto seek to become the first transatlantic side to reach Super League.

This game could’ve been a close one on paper, especially after Toulouse came out on top earlier in the season.

However, the reality was far from it. Toronto were clinical when chances came and had stern defence to back that up. Aside from their two tries, their French opponents rarely looked like troubling, and that is largely down to the dominance and strength shown by the Canadian side.

For Toulouse, this is a somewhat of a reality check. They will still remain second in all likelihood at the end of the weekend, but with the lead at the top of the table now standing at six, it very much looks like the French outfit will have to make do with securing the title of ‘best of the rest’ heading towards the play-offs.