While uncertainty remains over the 2020 rugby league season, planning for the 2021 World Cup goes on.

The historic draw for the tournament held at Buckingham Palace with the then Prince Harry in January, has whet the appetite for what promises to be a thrilling tournament in little more than 18 months time.

A planned media opportunity with chief executive Jon Dutton, unfortunately not possible due to the coronavirus lockdown, is now being conducted virtually to ensure updates can be given surrounding the tournament’s progress.

With the draw and fixtures decided, attention has turned to where games will be played and when.

And in a recent interview with the St Helens’ Star, Dutton revealed there is quite the clamour to host Tonga, no doubt because of the incredible scenes that fans around the world witnessed during their World Cup semi-final defeat to England in 2017 – not least the reaction to their historic wins over Great Britain and Australia last year.

Dutton said: “Obviously, there is a strong affection for Tonga and everyone wants them.

“It is complicated, and some teams are incredibly popular – Tonga being one of those. We have to look at where the games are being held, so there are geographical considerations. We will listen the towns and cities and if there are any natural links, any twinning or heritage links will be taken into consideration.

“For us it is about the optimum choice about how we ensure the venue is full three times over in St Helens and the same in Doncaster, Leigh and Warrington.”

Tonga have been drawn in Group D alongside Papua New Guinea, Wales and Cook Islands, who were based in Leigh for the 2013 tournament.

The IRL says it expects a new application from the Tongan rugby league community to take over the governance of the sport there.

Warrington adopted Samoa in 2013, and they have been drawn in Group A alongside England, France and newboys Greece.

Fiji’s special relationship with Rochdale was maximised during the last tournament on these shores, but with no games due at Spotland, they will no doubt gain attention from elsewhere in their group, which includes Australia, Scotland and Italy.

New boys Jamaica are likely to be in demand too, and they have a real chance of progression from Group C alongside New Zealand, Lebanon, Jamaica and Ireland.

A total of 21 venues will host games across the men’s, women’s and wheelchair tournaments.

18 of those will host men’s games – including the home grounds of Super League clubs Huddersfield, Hull, Leeds, St Helens and Warrington and other club grounds of Doncaster, Leigh, Newcastle and York.

A number of high-capacity football grounds will be used, particularly for the big occasions, including Old Trafford, Anfield, Elland Road and St James’ Park, as well as the University of Bolton Stadium which has hosted the Challenge Cup semi-finals in recent years.

The home of Wasps rugby union and formerly Coventry City FC, the Ricoh Arena is a venue, with Middlesbrough’s Riverside Stadium and Bramall Lane in Sheffield also included. 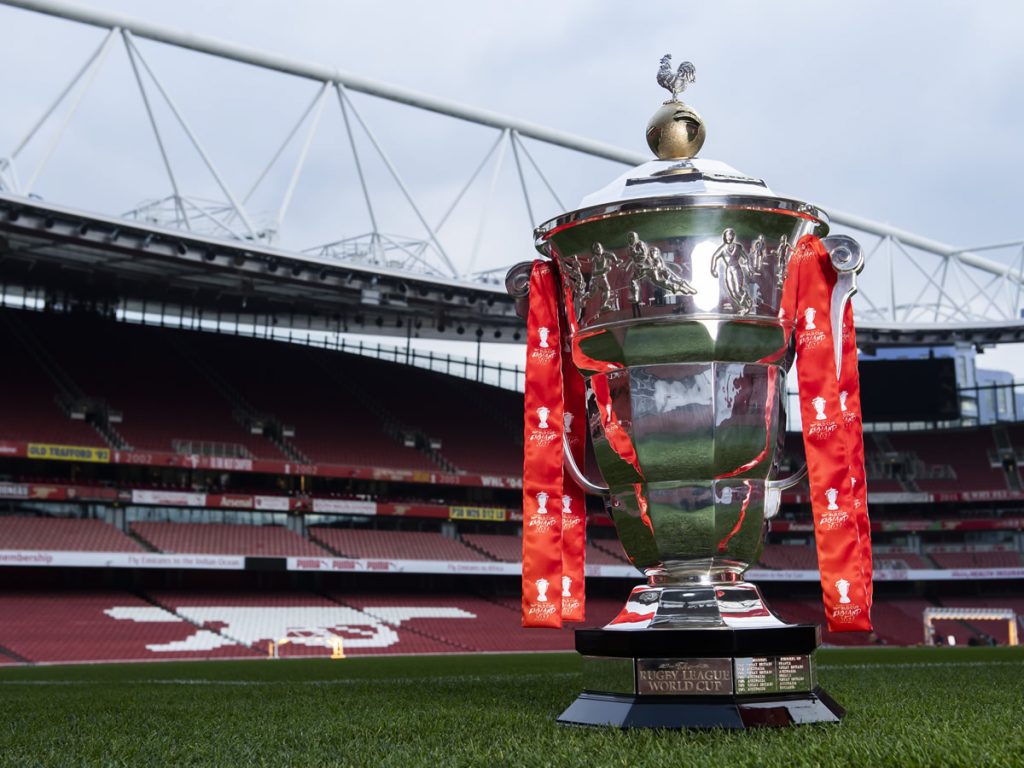 The most significant other ground is the Emirates Stadium, home of Arsenal FC, which will host a non-football game for the first time ever.

A timeline of announcements is set to be presented to the media, while Dutton will also reveal the World Cup’s role in helping to deal with the coronavirus pandemic.

Expansionist Blog: Jamaica, we have a rugby league team – and it’s going to the World Cup