Swinton gave their survival hopes an almighty boost after producing a sensational second-half comeback to beat Rochdale 40-30 at the Betfred Championship Summer Bash.

Despite trailing 30-14 midway through the second half, a stirring fightback from the Lions helped them move four points clear of Rochdale, who remain rooted to the foot of the table.

The newly-managed Hornets were dominant for large swathes of the first-half up until their second half capitulation, and they could find themselves three points adrift by the end of the weekend.

Rochdale hit back as Brandon Wood crossed in the corner after a brilliant short-side play from Scott Moore, before Declan Kay was sent strolling over by Dan Abram after his superb jinking run close to the line.

Frankie Halton reduced the arrears to 12-10 midway through the half after breaking the line 40m out and shrugging off the defensive efforts of Abram and Shaun Ainscough.

Nevertheless, former Wigan winger Ainscough atoned for his error as he burrowed his way over from dummy-half to restore their two-try cushion, before Harvey Livett picked up a loose ball on halfway and produced a delightful chip-and-chase to score on the stroke of half-time.

Stuart Littler’s side started the second half brightest and crossed within a minute of the restart, Matty Ashton reacting first to Liam Forsyth’s tip-back to make it 24-14.

At the other end, Ainscough picked up his second try in the corner as Rochdale opted to run it down the right on the last tackle, before Swinton began their fightback as Rhodri Lloyd dived over in the corner.

Forsyth did superbly to claim a high kick on the last and offload inside for Jack Hansen to cross a few moments later, and Rob Fairclough dummied his way over down the left-hand side to reduce the arrears further.

Swinton took the lead for the second time in the match with 13 minutes remaining. After Kay spilled a routine grubber kick on the last, the ball fell for Liam Paisley who stepped past one man and crossed to the right of the posts.

Rochdale went all out in pursuit of the game-winning try, and although they had two sets inside their opponent’s 30m zone, Livett’s audacious long pass was superbly read by Ashton, who raced 90m downfield to secure the points for the Lions.

Rochdale a work in progress

Matt Calland was only named as the new Rochdale coach at the beginning of the month. His opening two games have resulted in defeats to Featherstone and most recently York, but less than two weeks after taking over, there are clear signs of improvement for the Hornets.

However, they were made to rue a combination of handling errors and poor defensive reads as Swinton produced a sensational second-half revival.

It seems irrelevant now, but James Worthington’s first-half knock-on with the line at his mercy – brought after the Hornets worked a four-onto-one overlap down the right – could’ve put the game beyond doubt, even at such an early stage.

Rochdale will be left to reflect on missed chances and a lack of steel in their defensive rear-guard, but with another huge game against Barrow just eight days away, his side will need to pick themselves up quickly.

Despite there being many rounds to go, this was considered by many as a real four-pointer between two sides fighting it out for survival in the second tier of rugby league.

Swinton will likely be spurred on by this result, having shown real heart and spirit to get themselves in a position to challenge for the win, especially given their poor end to the first half.

Rochdale did show signs of a team adapting to their new coaching philosophies and style of play. However, the manner in which they fell apart and threw away two competition points will hurt the most. 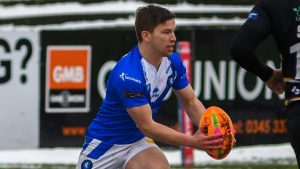 Fairclough was the beating heart of the Swinton side at Bloomfield Road, providing creativity and direction when his team appeared short on ideas.

It looked for a time like he would be overshadowed by opposing half-back Dan Abram, but the 21-year-old’s guile was one of the catalysts for Swinton’s second-half turnaround.

What a game of rugby that proved to be! It looked for all money like Rochdale were going to climb off the foot of the table, but somehow Stuart Littler’s side found a way to get themselves back into the contest.

If ever there was an advert for a topsy-turvy game of Championship rugby league, this was it.

Swinton showed immense fight against their relegation-threatened rivals, but they will need a few more displays like this if they are to get themselves out of the forthcoming relegation dogfight.