There were some excellent performances in round seven of Super League, but who made our latest Team of the Week?

Coote makes the Team of the Week for the third consecutive week and it is understandable why. He opened the scoring in Saints’ win over Castleford with a close-range effort and rounded off his performance with some excellent cleaning up at the back when the hosts did forge an attacking opening.

After being kept off the scoresheet in his first three games since returning from French Rugby Union, Yaha bagged four tries to steer his Catalans side to victory over bottom-of-the-table Leeds. The 22-year-old showed his power, beating three defenders for his first score, before displaying his pace and agility to round off a superb afternoon’s work.

Wiliame looks to be forming quite the partnership with Yaha on the Dragons’ left edge. Produced some excellent quick hands to set up Yaha’s second before breaking the line and selflessly allowing his wing partner to complete his treble with 20 minutes remaining. 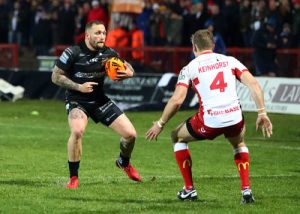 Was the beneficiary of a remarkable Bureta Faraimo offload to open his account against London, whilst his second was born out of sheer brute strength close to the line. A man of Griffin’s size is a godsend for Hull FC’s forward pack and he is rapidly developing into one of their star men of 2019.

It isn’t very often that a player scores a hat-trick and still ends up on the losing side. He showed superb speed for his length-of-the-field effort in the first half, while his other two finishes were courtesy of good work on his inside. He is now the leading try-scorer in Super League with eight tries and is arguably the best of a bad bunch at present for David Furner’s side. 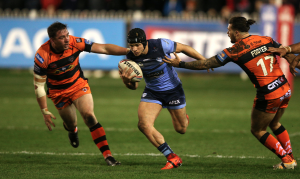 Lomax had yet another game to remember as he notched a try and assist against a very out-of-sorts Tigers outfit. He made 212m at the Mend-a-Hose Jungle and showed his knack of being in the right place at the right time to support Mark Percival and round off the scoring.

After some criticism in recent weeks, Williams returned to standards of seasons gone by and inspired Wigan to victory over Salford. His link-up play with Jarrod Sammut was sublime, while he showed a superb turn of pace for his second score. Wigan fans will be hoping he keeps this level of performance up.

Had a home debut to remember and capped it off with an outrageous ball steal on Dom Manfredi to score close to the line. Walker made 63 metres and 13 carries, producing three offloads. Unfortunately, it wasn’t enough for his side to get over the line.

Leeming has undoubtedly been Huddersfield’s best player so far this year and he grabbed another two tries against Hull KR on Friday. He was on the inside of Jermaine McGillvary to score his first and aided Lee Gaskell’s break for his second. If the Giants are to challenge for silverware this year, their 23-year-old hooker will be a huge part of that.

Fifita gets a place in the team once again after yet another terrific showing against Warrington. He made six tackle busts and ran 103m, while his ability to dominate the likes of Danny Walker in the closing stages nearly set the platform for a remarkable last-gasp comeback. 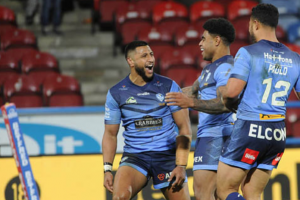 Doubled his try tally for the season on Friday night and re-emphasised his value to this St Helens outfit. His barging effort epitomised a man confident in his own ability, while he muscled up in defence with a solid 18 tackles.

The 25-year-old latched onto a neat Robert Lui kick to open the scoring against the Warriors and seemed to kick on from there. He made a season-high 20 carries on Sunday, making 113m and seven tackle busts. His presence in this Salford outfit is growing by the week.

Didn’t play as many minutes as he normally does against Castleford, but Knowles was still as tough as ever in both defence and attack. It is Knowles’ consistency that is most noticeable, and he has deservedly been rewarded with a spot in the England Knights Performance Squad.