There were some excellent performances in round eleven of Super League, but who made our latest Team of the Week?

Wynne had a home debut to remember and showed he certainly isn’t afraid of mixing it with the big boys of Super League, despite his tender years. The Airlie Birds academy product bagged an assist for Jack Logan’s first-half try and rounded off the scoring by supporting Carlos Tuimavave and Albert Kelly’s break downfield. 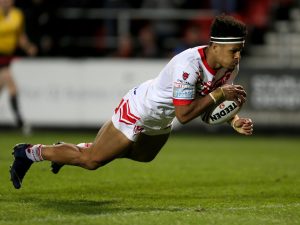 I spoke in the previous Team of the Week that Grace could be a dark horse for a spot in the Great Britain spot. After bagging a treble in one of Saints’ biggest games of the season, who could argue? The 22-year-old, who made 146m, showed pace and strength in abundance for his final score.

Showed real game management as the Red Devils produced one of the biggest shocks of the 2019 season so far. Although he didn’t cross for a try of his own, the former Widnes centre was near-perfect with the boot, helping to take the sting out of a relatively poor Warrington side with four penalties either side of half-time.

Topped off his first appearance of the season for the Dragons with an exquisite finish out wide as Steve McNamara’s side put the Super League newcomers to the sword. Aside from his try, Romano made 74m and broke the Broncos defensive line on four occasions.

The FC winger showcased a range of talents to score his first three scores of the 2019 season. Logan producing a superb take in the air for his first, strolled in at the corner for his brace and put on the afterburners for his treble late on. Good Friday certainly lived up to its name for the 23-year-old!

Made a sensational impact from the bench to haunt his former club on derby day. The 28-year-old picked up a try and an assist, as well as having a huge say in Wynne’s score. Kelly also made an average of 13m per carry and produced the kind of flair that FC’s fans have been so used to in the last two seasons. 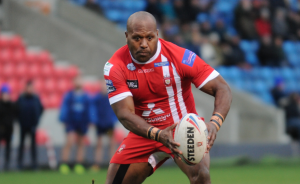 Lui orchestrated from the centre of the park alongside Jackson Hastings to help Salford curb their run of four consecutive league defeats in emphatic manner. The Australian produced a delightful kick for Kris Welham’s opener, teed up Daniel Murray, had a hand in Jake Bibby’s try and even had time to capitalise on some sub-par Wolves defending to notch his second of the season.

Paea hit the ground running from the very start to help Hull FC dominate their cross-city rivals down the centre of the park. Aside from his try, the former Rovers man made 124m, despite his limited minutes on the pitch, and averaged 10m per carry, his joint-best from this season.

Showed a real freshness to his play after being rested during last Friday’s Challenge Cup tie against Workington. The scampering hooker set up Tui Lolohea and James Donaldson in the first 10 minutes and managed to cross for one of his own before a quarter of the game had passed. Matt Parcell’s return from the wilderness has intensified the competition, yet Dwyer laid down a real statement of intent against the Giants.

Despite being on the wrong side of the score line, the Trinity front-rower played big minutes and emphasised his significantly-improved fitness levels. The former Penrith and Parramatta man bust the line four times, made 131m and muscled up in defensive with a season-best 19 tackles.

Whitley produced far and away his best performance so far in a Catalans jersey. The 23-year-old crossed twice, picked up an assist for Lewis Tierney and ran a season-high 127m. The Dragons need some real quality in their forward pack and Whitley certainly provides that. The challenge for him now is to do it on a regular basis. 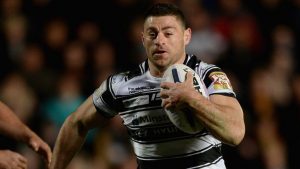 Any second-rower that demonstrates such an impressive sleight of hand deserves to go in our Team of the Week! The ever-dependable Australian dummied his way past Craig Hall to open the second-half scoring for Lee Radford’s side, produced a delightful pass for Joe Westerman to cross and added a season-high nine tackle busts to cap a superb display.

Despite being the beneficiary of some excellent work by Sam Tomkins to score in the first-half, Bird showcased the ugly side of his game to great effect, rolling his sleeves up for the good of the team. The 34-year-old made a season-best 22 tackles and showed his true leadership qualities – something which maybe hasn’t been as visible during the Dragons’ indifferent recent from.