There were some excellent performances in round five of Super League, but who made our Team of the Week?

Was imperious in attack, producing a sublime looping pass over the top for Regan Grace to score in the first half. Didn’t let up in the second half and was on hand to support Theo Fages’ break downfield to cross for a four-pointer of his own. 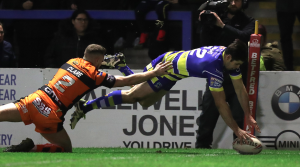 Produced two excellently taken finishes on Thursday night on what was his first start of the season. Including his pre-season appearance against Widnes, Mamo has now scored five tries in two games at the Halliwell Jones Stadium in 2019.

Took the game beyond Catalans with his tries either side of half-time. Bibby produced a scintillating break for his second and linked up expertly with Jackson Hastings. This was arguably his best performance in a Salford jersey.

Returned to the starting lineup against London and bagged his second try of the season on home soil. The 30-year-old also made 135 metres for the Saints, his most in one game since arriving at the Totally Wicked Stadium. 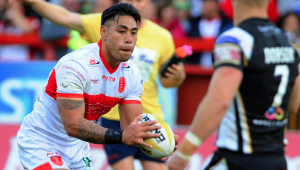 Produced a near-flawless performance with the boot against Catalans and grabbed a try that his effort and endeavour deserved in the dying minutes of the contest.

The 23-year old is starting to look more assured in the halves, having been given the chance this year following injury to Kevin Brown. Patton produced a superb assist for Mamo’s first try and showed great game management with his kicking late on.

Epitomised everything that was good about Salford’s incredible performance against the Dragons. He produced a try and two assists at the Stade Gilbert Brutus and broke the line on four occasions. Simply incredible from the superstar Australian.

The rampaging forward seems a different player under Tim Sheens this year. He produced the most carries in Super League against Wakefield (41), while his 179 metres made was the second highest in Super League last week. 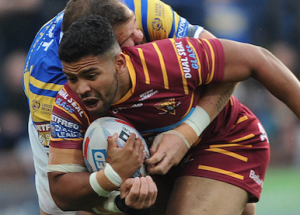 The 23-year-old orchestrated the ruck with real direction against Wigan. Leeming made 109 metres and jinked his way through the line superbly for Huddersfield’s opener.

The Giants number 17 was the catalyst for a physical contest at the DW Stadium. He supported Matt Frawley’s break in the build-up to their first try, while his tough carry towards the line in the second period laid the platform for the game-clinching try.

Was on the receiving end of some hefty challenges but still managed to cross for Huddersfield’s second score. Wardle’s battling performance was summed up by an inability to pick up his man-of-the-match award, with the 27-year-old in the changing rooms undergoing a concussion test.

Produced a superb assist for Jamie Shaul’s try and make four tackle busts for the Airlie Birds. Made 119 metres at the KCOM Stadium, more than twice what he managed the week before against Huddersfield.

Made a real game-changing contribution from the bench at a time when Steve Price’s side needed it most. Murdoch-Masila is arguably the best forward within five metres of the line, and his rampaging try in the second half was reminiscent of his Salford days.