The Australian fullback has been in scintillating form in 2018 and has been everyone’s hot favourite to win the award.

He leads the try scoring chart with 24 scores, as well as having 23 try assists to his name.

His exciting breaks and emphatic footwork has dazzled spectators througout the season.

With the League Leaders Shield all but secured – the fullback will be setting his sights on a Grand Final winners ring.

Reports down under suggest 2018 will be he last year in Super League, so if he wants to win it – now is the time!

The Saints skipper has been, once again, one of the best hookers in the league – if not the world in 2018.

His tireless displays of pure grit and determination, whether that be in attack or defence, are almost unparalleled. 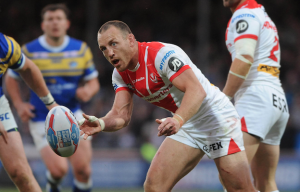 Tomkins, 29, has enjoyed a brilliant season so far for Wigan – standing out as one of their best players.

Many have been quick to label the fullback as nothing compared to his pre-NRL form, but 2018 the Wigan star has adapted his game to be one of the most effective in his position.

This spike in form makes the news of his impending departure to the Challenege Cup champions Catalans Dragons, all the harder to accept. 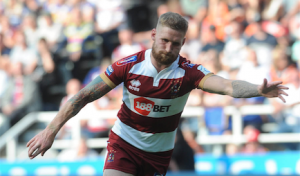 The Warrington number nine has reached the top of his game once again this year, helping the Wolves into the top four and well within a chance of silverware.

With 5 trys and 7 assists so far this year, as well as 938 tackles to his name, Clark is well within the running to win the greatest individual award on offer.

His form was one of the reasons the Wolves reached the Challenge Cup Final at Wembley.

Whilst not at the top of many peoples lists – there is no denying the terrific year Tupou, 28, has had for Wakefield in 2018.

He has formed a destructive partnership with in form winger Tom Johnstone on the left edge and has caught the attention of many rugby league fans.

His coach, Chris Chester believes he must be named in the Super league Dream Team after such an impressive season.

Can he win the Steve Prescott Man of Steel?