Hull KR are back at home this week and will host the Leeds Rhinos.

The Robins come into this game fresh from a hearty performance against league leaders St Helens the week previous, and will certainly fancy their chances should they perform to a similar level come Thursday night. The Rhinos won at home last week against Castleford Tigers and it was in dramatic fashion, a golden point drop-goal from the unlikely Brad Dwyer sealing the deal. Therefore, both sides will be riding on confidence when they meet.

Linnett played in the back-row last week and had a brilliant game, two tries exemplifying the fact. His  positional awareness allowed him to run the correct lines to perfection and with his strength, barged over the line. He has played eight games this year for the Robins and has three tries to his name, not a bad return for a second-rower.

Cameron Smith has been going about his business quietly at the Rhinos and is starting to show the calibre of player he could become. The young 20-year-old is one of the Rhinos’ hot prospects and will be vital in the long-term health of the on-field product for the club. Biding his time, Smith has featured for Featherstone Rovers as well this season in order to accumulate minutes but with five appearances so far for the Rhinos, it is safe to say his presence is still very much rated by head coach Dave Furner. 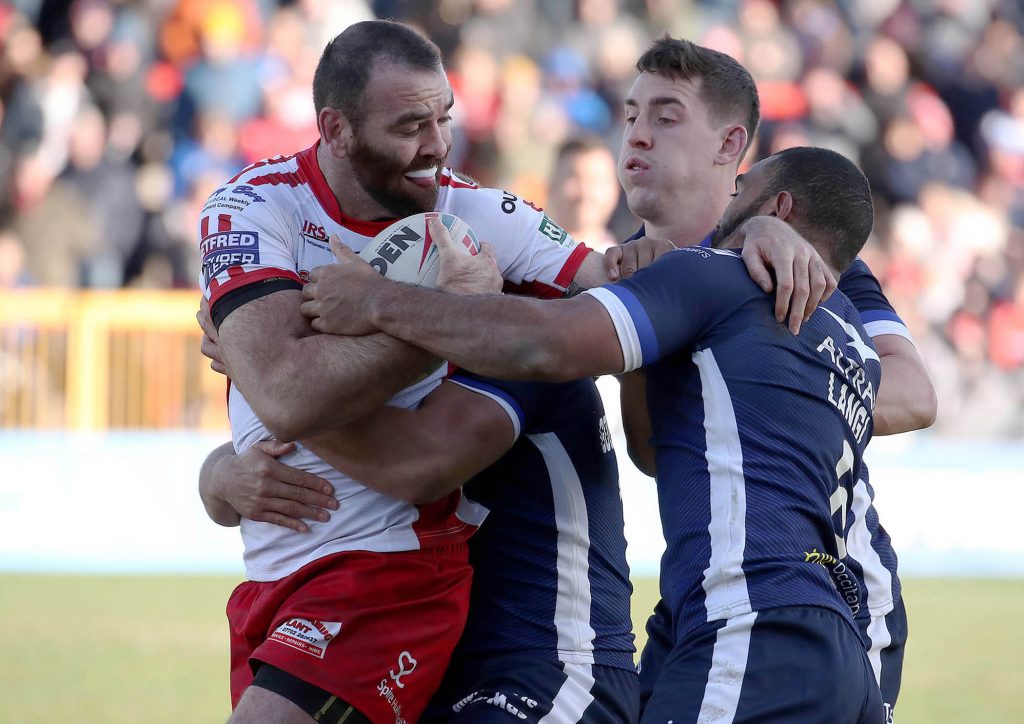 The battle of the full-backs will reconvene this weekend when Castleford Tigers host the Wigan Warriors.

Castleford will struggle not to feel crestfallen after last week’s last gasp loss to Leeds Rhinos, a game that they had numerous chances to seal for themselves. However, that must be put behind them and their attention firmly on the Warriors, who look to be going from strength to strength (well, on the field at least). The Warriors are fresh from a convincing all-round display against the Catalans Dragons and will look to make it three victories in as many weeks come Friday.

Mata’utia has been a solid acquisition for the Tigers and his form has been a testament to that. He has featured in all of the Tigers’ games this year and has three man of the match awards to his name, further highlighting the impact he can deliver. Consistency is a word that best describes Mata’utia and come Friday night, Castleford will need this in abundance.

Hardaker has enjoyed a relatively impressive start to his Wigan career but with every passing week, the Hardaker of old has started to show himself. Head coach Adrian Lam lamented his impact in recent weeks and revealed the full-back’s considerable weight loss since the start of the season, which could explain the increase of pace we have seen from the former Castleford and Leeds man. 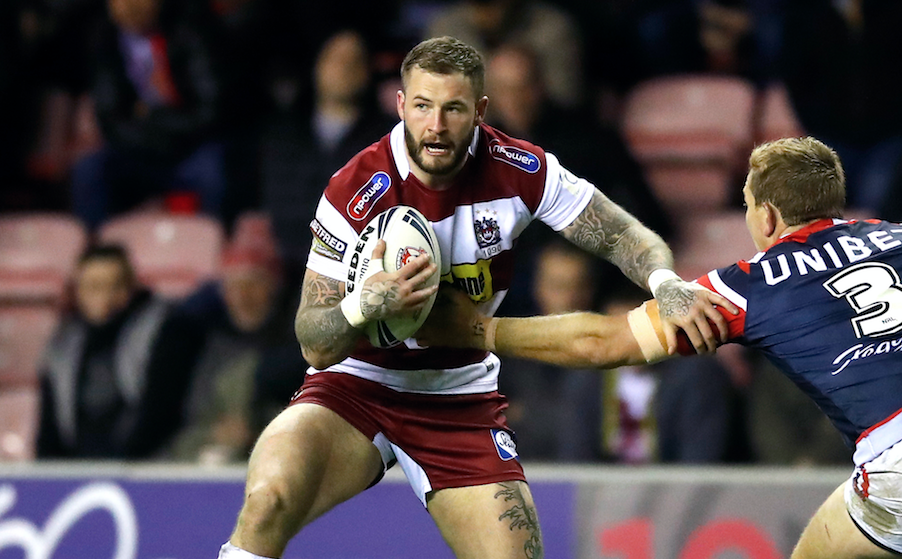 Another game, another fight of the full-backs. This one will see in-form Warrington Wolves host the defiant London Broncos.

Warrington Wolves have been the best performing side behind leaders St Helens and they showed their quality again last week when they destroyed a struggling Hull FC outfit. However, their attention must not waver and their opponents this year must not be underestimated. The Broncos have already claimed maximum points from three sides all vying for a top-five finish and this weekend their goal will remain the same.

If there is any player that deserves recognition but ultimately fails to receive it, the man is Ratchford. Praised by his peers and feared by his opponents, the Warrington full-back is at the heart of plenty of the good that comes his side’s way, yet he still seemingly gets under-appreciated by fans of the game. This will be the least of his worries mind, and with eight appearances, three tries, 40 goals and two man of the match awards, this clearly isn’t hindering his performances.

Walker is a top player for the Broncos and optimises everything about the never-say-die attitude of London. His blistering pace and intelligent support play has seen his side march up the field on many occasions this season and his from is one of the contributing factors behind his side’s well-earned victories. If London are to pull-off another spectacular upset this weekend, Walker will have to perform to his highest standard and do all he can to outplay his positional counterpart. 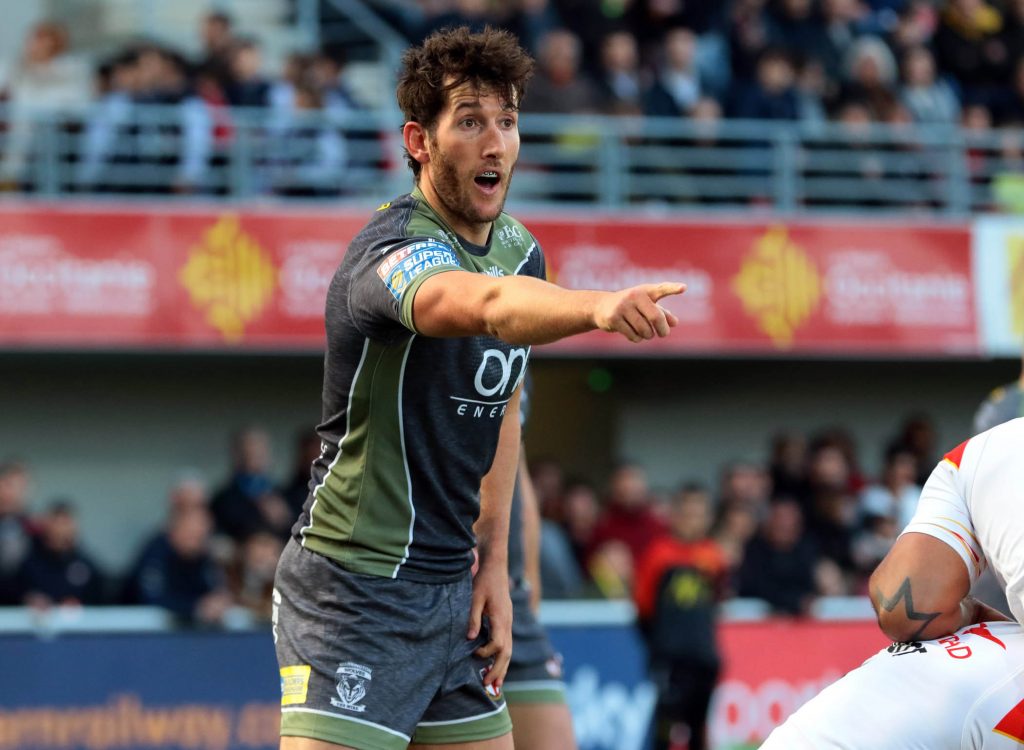 Wakefield have shown the competition just how well they can perform, and if this level can be maintained then their place within the top-five play-offs cannot be denied. They come into this game with bags of confidence after a brilliant win against Salford Red Devils, and will be looking to put back-to-back wins together. Huddersfield have just achieved such a feat, and will be eager to make it three wins in as many weeks this weekend.

Brough is a veteran of the game, and despite being at the twilight of a sensational career, his performances don’t seem to be slowing down. At this rate, he could be player forever! His tactical awareness, passing ability and deft kicking play puts him up there as one of the best in league, on his day that is. He has one try, 36 goals and two drop-goals next to his name and he will be looking to boost these stats come the weekend.

Gaskell is just as important to the Giants, as Brough is to Trinity, which is exactly what makes this battle so interesting. When he wasn’t featuring at the start of the year, the Giants looked directionless, but ever since his return the performances have gradually improved and with that comes results. His operational style of play led to plenty of tries last week when Huddersfield beat London and he will need to perform to the same level when these two sides meet. 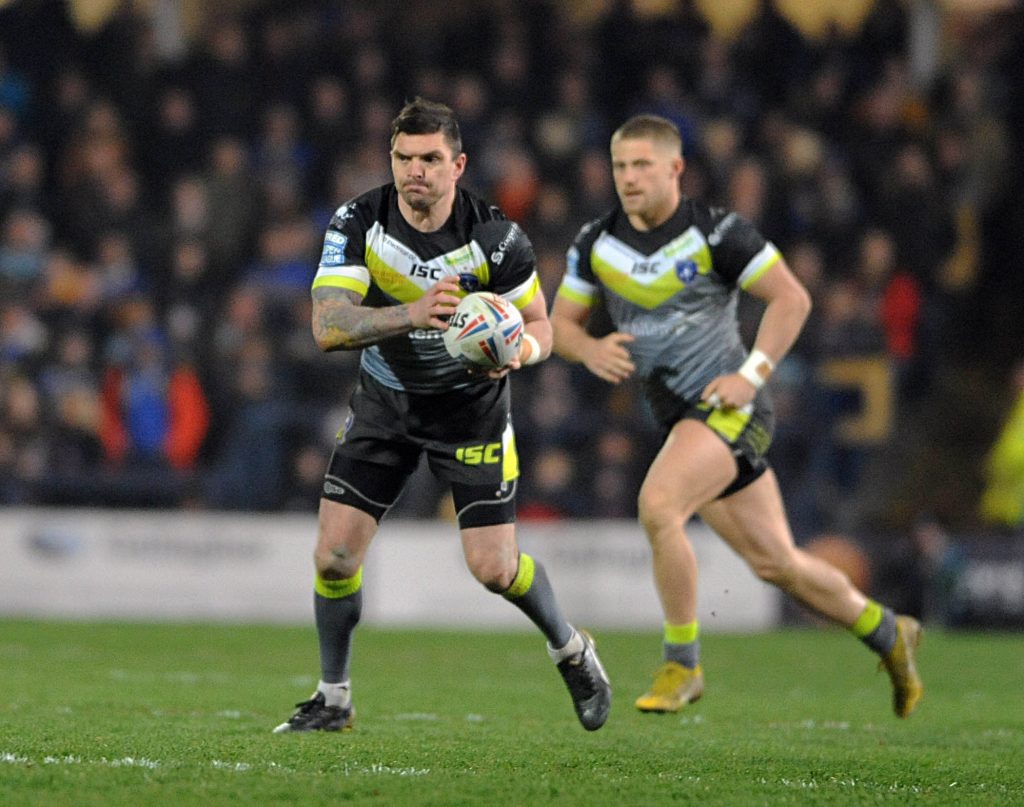 The Dragons just can’t seem to shake this horrific away form that has plagued the club since its inception well over ten years ago. However, the one shining light throughout has been their usually solid home performances, the Stade Gilbert Brutus being one of the toughest venues to visit. They were more than humbled last week against Wigan and will be eager to right many wrongs this weekend. St Helens have been setting the standard once again in 2019 and look the team to beat. Last week several key players missed out on selection, which gave some young heads a chance to shine and shine they did, as they recorded a solid win over Hull KR.

Gigot is a quality player, for that there is very little doubt. However, there seems to be something slightly awry with his game this year. This according to many, is due to his positional switch from full-back to half-back. He is by no means awful in this position, but it is no secret that the Dragons seem to struggle in direction at times. If he can perform like we all know he can, his side often look good for the victory.

Richardson is a name that has seemingly disappeared from all of our lips, yet his standout performances in his breakthrough 2018 season earned him a Dream Team selection. However, the incredible performances of team-mate Theo Fages has all but shut-out the young pivot, with Leigh Centurions being his only avenue to earn valuable minutes. Fortunately for Richardson (less so for Fages), his chance has finally come and he will play in the games against Catalans and one would predict Warrington, too. Can he reach the level he did last season? 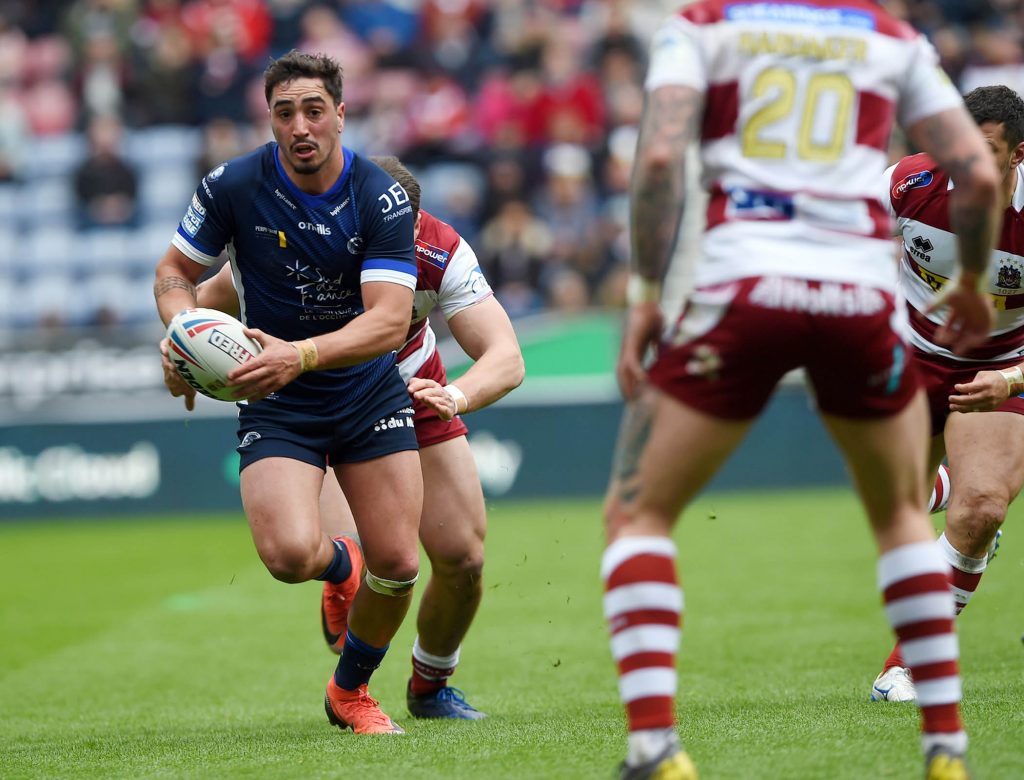 Salford Red Devils will host Hull FC is the final fixture of the round this Sunday, but who will come out on top?

Salford have played some great rugby so far this year and are not a million miles away from being the top top side they so deeply desire. However, despite a handful of great results, they have lacked the cutting edge in other games that see them just short of where they want to be. Hull FC are in a similar position and they sit on the same number of points. There is no denying the disappointment many felt when they lost so heavily against Warrington last week.

Lussick has been one of the better signings Salford have made in recent years and is one of the Red Devils’ most consistent performers. Despite being just 23, the young hooker is showing great maturity in his game and has four tries to his name from nine appearances. If Salford are to get back on track, he will have to perform to the level the Red Devils’ faithful know he can.

Danny Houghton has featured in these ‘key battles’ pieces before but there is a very vital reason, he is one of – if not – the key part of the Hull FC machine. His performances are more often than not the difference in games and he will be called upon once again when these two sides meet. He is the league’s top tackler and has three man of the match awards under his belt – will these stats increase this weekend? 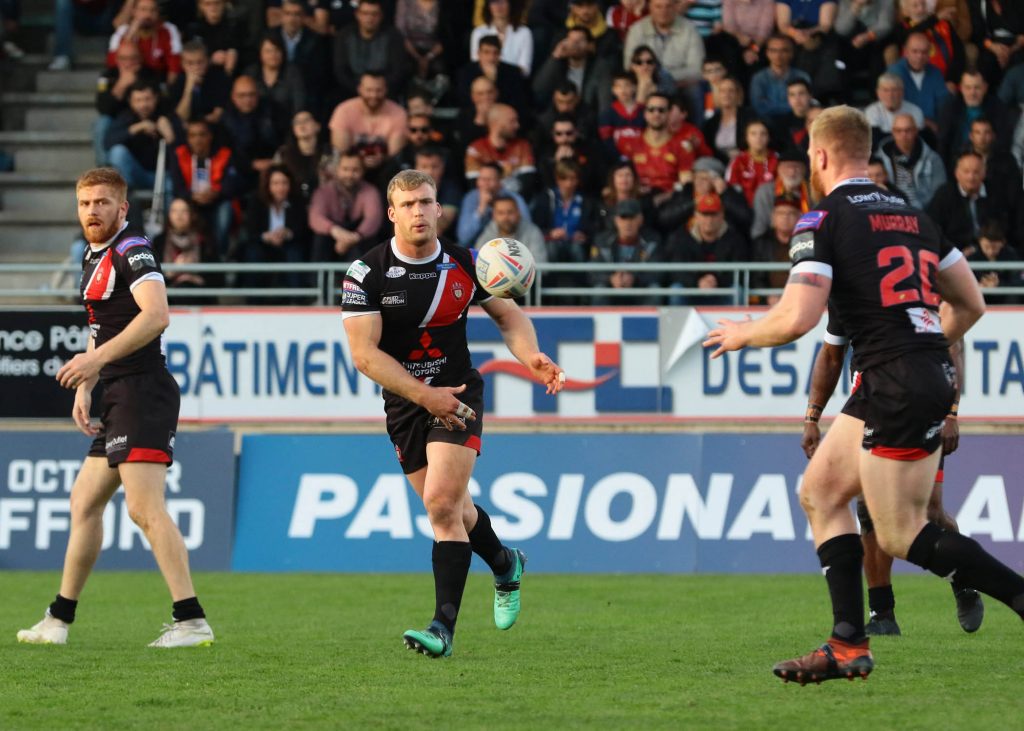