All the latest from across the channel, in partnership with TreizeMondial.fr

The Broncos led through Mike Parenti early on but the Leopards would run in 11 tries after breaking the visitors’ resolve after 20 minutes.

It was the only game of the weekend after the scheduled fixtures between Lezignan and St Esteve, plus Carcassonne against St Gaudens, were postponed due to coronavirus.

The French Elite 1 Championship final will be broadcast live on viaOccitanie, as well as the new Sport in France channel. The final will be played at a yet to be confirmed neutral venue in June.

Six-again rule to be implemented

The French Federation has confirmed that the so-called six-again rule will be enforced from this weekend onwards. Already in place in the NRL and Super League, it is being introduced following the recent updated guidance on laws from International Rugby League ahead of the World Cup.

Toulouse have signed young prop Hugo Salabio and winger Jordan Flovie on loan from St Esteve. The pair will link up with Sylvain Houles’ Championship side for at least two weeks as they continue their development. Both were part of the title winning St Esteve team in 2019 and have played in France national teams.

Kiwi prop John Talisa has become the latest Elite 1 Championship player to confirm a move to the new North American Rugby League, with Atlanta Rhinos. Talisa, 23, joined Lezignan on loan from Villefranche after the Elite 2 season was curtailed due to the pandemic.

France have been elevated to Tier 1 status in wheelchair rugby league, joining England, Australia and New Zealand. Players who represent a Tier 1 nation are unable to play for other Tier 1 nations, but can play for non-Tier 1 nations subject to normal eligibility rules. An IRL Wheelchair advisory group chair Pippa Britton said: “The members of WHAG were asked to examine the eligibility rules as they apply to the wheelchair game and it was felt that France, as the current World Cup holders should be recognised as a Tier 1 nation.” 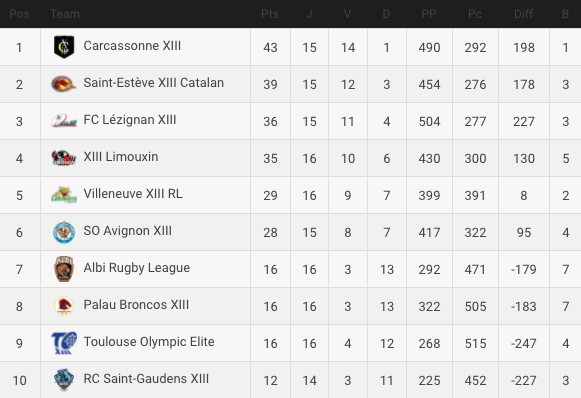