Joel Farrell crossed twice as Sheffield climbed up to third with a determined 30-18 victory over Barrow Raiders.

In the opening game of the day two of the Betfred Championship summer bash, the Eagles took a comfortable lead midway through the half, before Barrow crossed twice late on.

Nevertheless, the Raiders slumped to a 13th straight defeat, and could end the weekend three points behind the sides above them if other results go against them.

After a stop-start opening to the game, Barrow took the lead when Jarrad Stack jumped highest to expertly claim Jamie Dallimore’s cross-field kick.

The Eagles hit back just over 10 minutes later when Farrell was put through a gaping hole by Anthony Thackeray off the back of Nathan Mason excellent offload, the score tied up at 6-6.

Sheffield started the second period superbly and hit the front as Farrell hit a short ball to score, before Ben Blackmore strolled over in the corner six minutes later after receiving a beautiful cut-out ball from Josh Guzdek.

Thackeray extended the lead to 30-8 with a quarter of the game remaining, first dummying his way over the line before being on-hand to support Farrell’s on his inside and go over under the sticks.

Tempers started to flare in the final minutes, but there was enough time for Barrow to make the scoreline more respectable, Tee Ritson crossing out wide before Jono Smith barged his way past three defenders to pick up his third try of the campaign.

One of the names frequently mentioned throughout the clash between the Raiders and Eagles was that of Wartovo Puara Jr.

It was just 12 months ago that Joe Bullock properly came onto the scene with a rampaging performance for Barrow at last year’s Summer Bash; fast forward a year and he played a part in Wigan’s historic game with Catalans at the Camp Nou 24 hours ago.

Of course, they are very different players, and at 28 years of age, Puara is further into his career than Bullock was. Despite this, he proved to a constant menace around the ruck, was always trying to keep the ball alive and added a different dimension to the Raiders’ play.

So, could the Papua New Guinea international be the next Barrow play to make the step up to the top flight in the next 12 months? It wouldn’t be beyond the realms of possibility to see that happening. For the time being, both himself and the rest of Paul Crarey’s side have Championship survival to think about, with Puara appearing to hold the key to their success.

They may have stepped up a gear to get back to winning ways in the league, but victory certainly came at a cost for the Eagles this afternoon.

James Glover was the first to be sidelined after just two minutes, the outside back twisting his leg awkwardly in a tackle after being hauled to ground in an unorthodox fashion by Lewis Charnock.

It would only get worse for Mark Aston, who had to witness Matt James leave the field with a suspected dislocated ankle 20 minutes later.

Potentially being without two of his key men, both of whom have been virtually ever-presents for the Eagles in 2019, will be a tough blow for Sheffield to take, especially given they have such important games coming up in the next two rounds against Toronto and Featherstone. 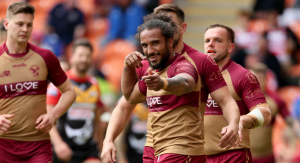 It would’ve been easy to hand man-of-the-match to one of either Thackeray or Pat Walker, both of whom were classy and composed in the halves for the Eagles.

However, Sheffield’s injuries meant that a number of their bigger men had to play longer minutes, most notably Farrell and Warrington loanee Pat Moran, who was also superb.

The Jamaican international was devastating close to the line, had the quick hands needed to feed Thackeray for the second of his tries, and didn’t let up once in his defensive effort over the course of the 80 minutes.

Farrell could certainly be someone to keep an eye on in the next couple of years.

It looked for a while like a shock result could be on at Bloomfield Road, but once Sheffield turned up the heat in the second period, a tiring Barrow side really didn’t have any answers.

Full credit must go to the Cumbrians. They came into the game on the back of a 12-match losing streak but gave a good account of themselves against a side who had scored 170 points in their four games prior to this weekend.

If the Raiders can sort their fluidity out in attack, they should have enough to stay in the division. However, as the weeks tick by and the sides above them start to pick up points, Paul Crarey’s side could soon find themselves cut adrift alongside Rochdale, giving their meeting next week at the Crown Oil Arena even more importance.