All happening in Super League opener 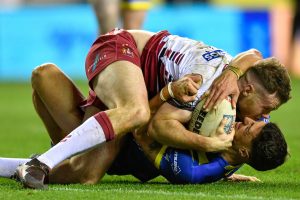 If the opening game of the 2020 season is anything to go by, we’re in for a real treat over the next few months. Wigan and Warrington went toe-to-toe in a full-blooded contest at the DW Stadium, with the home side eventually making their man advantage to claim two competition points. Having seen Chris Hill sent off for a reckless high shot on Sam Powell inside the opening quarter, Warrington competed valiantly without their captain and could’ve taken their game to extra-time, had they taken advantage of good field position in the closing minutes. Add to the Hill incident a potential eye-gouge by Morgan Smithies on Blake Austin, put on report by referee Chris Kendall, there was plenty to talk about. Hopefully all big games this season can live up to the intensity showcased on Thursday night.

An opening-weekend repeat of last year’s Super League Grand Final was the perfect indicator of how well St Helens and Salford have fared over the off-season. Would Kristian Woolf be made to rue St Helens’ lack of activity in the transfer market? Following a raft of star departures, could Salford still compete at the top end of the table? It is unclear whether Salford have regressed – which is understandable without some of last year’s key men – or whether Saints were simply that good. The hosts really did put a marker down for the rest of their competition rivals; even without the influence of James Roby and Tommy Makinson, they dictated from the off and looked sharper than ever – impressive stuff.

There were a number of Super League newbies on the opening weekend of the competition, and while the likes of George Burgess and James Maloney struggled to make an impact, others had a debut to remember. Huddersfield produced the result of the weekend, shocking Catalans in their own back yard. The Giants were led by their new marquee man and club captain Aidan Sezer, who capped a man-of-the-match display with a 16-point haul. Having signed from Swinton in the off-season, Warrington’s Matty Ashton also showed that he is more than ready for the step-up to the top flight with an impressive performance. Whether players have stepped up from lower leagues or arrived from abroad, there are certainly plenty who look ready to make a name for themselves in Super League.

Relegation candidates show their worth 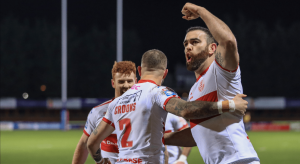 Prior to the action getting underway, most people had Hull KR and Huddersfield were seen as two of the main candidates for relegation this season. Fast forward to the end of the weekend, and any myths of certain sides being a long way behind the rest are well and truly wide of the mark. Despite an influx of new signings, Hull KR looked a largely coherent outfit as they toppled injury-hit Wakefield at Craven Park while Simon Woolford’s Giants produced a stellar performance to win away at Catalans.We may only be one week into the season, but both sides have shown that this year’s fight for survival is far more open than many first thought.

Simon Woolford: Israel Folau is a good signing for Catalans

Sam Tomkins wants to focus on playing well for Wigan and is not worried about gaining an England call-up, according to Wigan coach Shaun Wane. [Read more…]

Shaun McRae will not take charge of Salford’s match against Wigan after taking a month’s leave on medical advice.