How will Super League act upon the terrible scenes in Perpignan? Can St Helens really do the treble? Here’s a look back at all the action over the weekend in a bitesize fashion.

Super League need to come down hard on Catalans and Warrington 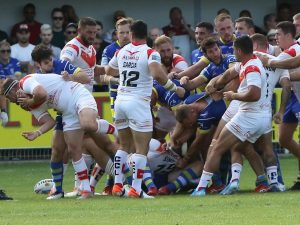 As an avid rugby league supporter, it was sad to see such abhorrent and disgusting scenes in the closing stages of Catalans’ game against Warrington. Regardless of who was to blame, the ending to that contest will tarnish the reputation of rugby league as a whole, despite it being the actions of the mindless minority. Super League and the RFL have promised to deliver firm punishments against those involved, and over the coming days, I’m sure we’ll see whether their actions speak as loud as their words. Rugby League is proud to be an inclusive family sport, and it is such a shame to see such horrendous scenes eroding all the values our sport stands for.

Treble on the cards for sensational Saints

There’s still five games left of the regular season to play in 2019, but Warrington’s defeat yesterday means that St Helens have claimed the League Leaders Shield for the second year in a row. It was always likely to be Saints who finished top, given the manner in which they have brushed aside almost everyone that have stood before them. After the news of Justin Holbrook announcing his decision to return to Australia at the end of the year, I’m sure St Helens fans will be happy to finish the week with a smile on their faces. There are still two major trophies left to play for, and Saints will fancy their chances of a clean sweep come the end of the campaign. 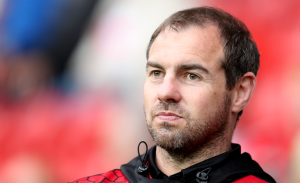 Another week, another win ticked off for the Red Devils. Ian Watson’s side ran out comprehensive winners away at London and moved to within two points of the top five once more. Once again, Jackson Hastings was in scintillating form, while Niall Evalds crossed for a hat-trick, his fourth of the season. The games are running out for Salford, but three or even four wins from the remaining games could provide just enough pressure for the sides above them to slip up. 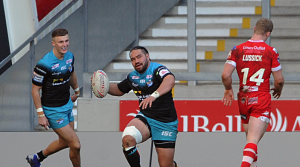 Despite Leeds’ struggles in 2019, the combination of Konrad Hurrell and Ash Handley on the Rhinos left edge has been a sheer joy to watch. Handley possesses the speed, Hurrell the strength and creative guile; together they have proven to be a formidable duo, crossing for a combined 31 tries in 24 Super League games. The Rhinos are still embroiled in a relegation battle, but with their key men hitting form at the right time, it could prove to be all they need to avoid the drop.