England’s World Cup dreams came to an end at the semi-final stage for the third successive home tournament.

Stephen Crichton kicked a golden point drop goal to lead Samoa to a 27-26 victory and secure a first ever final berth for a Pacific island nation.

It was a stark contrast to the tournament opener between the two teams, that England won 60-6, but where did the match swing in the Samoans favour?

Should Junior Paulo have been sent off?

After Samoa had taken an early lead through Tim Lafai, they were reduced to 12 men for 10 minutes when Junior Paulo was sinbinned for a spear tackle on Tom Burgess. Burgess was upended and put to the ground head first, almost vertically. 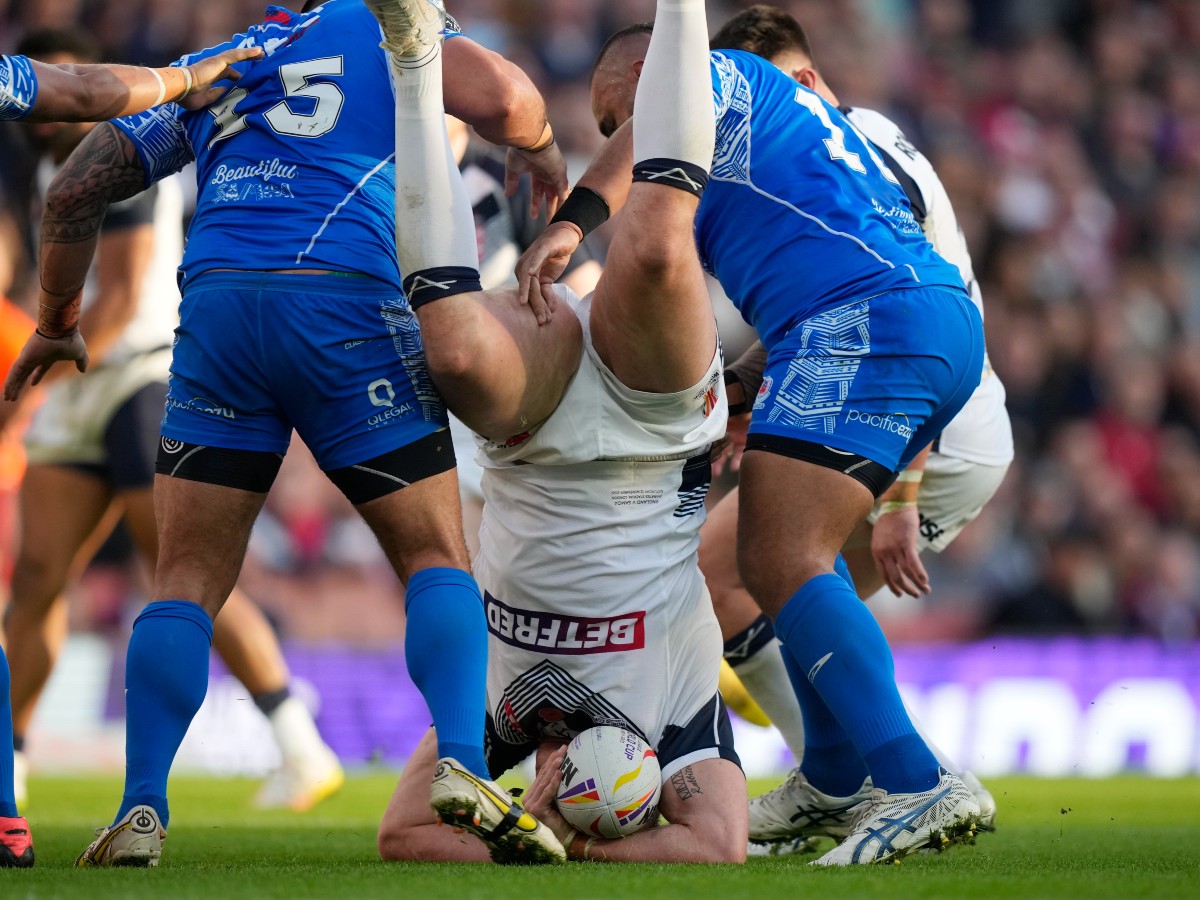 Referee Gerard Sutton showed the yellow card, but it could have quite easily have been red. Indeed, had it been a Super League match, perhaps the decision would have been different. As it was, England didn’t make the most of their 10 minute one man advantage, failing to score in that time.

Josh Dugan’s ankle tap on Kallum Watkins was the enduring image of the 2017 World Cup final, for English fans at least, and the Salford centre had a tough time up against his club mate Tim Lafai.

After watching Lafai score the game’s opening try, it looked like Watkins had got one back only for the video referee replays to show that the ball had been dislodged just before it was grounded.

It would have provided a boost to England’s sluggish start. Watkins would make a key play to contribute to John Bateman’s second half try, but on a difficult afternoon for the right hand side, he was brought off by coach Shaun Wane and replaced by Bateman in the centres as England chased the game.

England were shellshocked at 20-12 down and needed to find a spark. A flashpoint around the hour mark saw virtually every player involved in a skirmish, triggered by an altercation between Sam Tomkins and Jarome Luai.

As Tomkins returned from chasing a kick, Luai seemed to applaud him sarcastically and Tomkins responded with a quick slap around the head. That prompted a reaction from Luai to take him to ground, and handbags followed. England had upped the intensity in the preceding set, and the incident turned up the atmosphere a notch to try and get the hosts back in the game.

England’s rub of the green

Had Samoa not come out on top, they may well have pointed at a couple of decisions that went against them in the second half. A last tackle play from England saw Jack Welsby’s kick to the corner bounce on its head and sit up for John Bateman to touch down, but the video referee review highlighted the ball had touched the dead ball line and as such, it was rightly ruled out.

But England retained the ball, as Samoa were called offside after the video review, and from the next set, Herbie Farnworth crossed on the far side for his first try.

Shortly after that, there was another decision that split opinion. After Sam Tomkins had kicked from around half way, he was pushed by Paulo and went to ground. It resulted in England being awarded a penalty 25 metres out, which Tommy Makinson would subsequently convert to tie the game.

Samoa challenged the call, but it stood. With the amount of post-kick contact on players that goes unpunished, it was a surprise to some.

Arguably the headline selection of England’s tournament, Australia-born Victor Radley spent the final quarter of the match in the relatively unfamiliar position of hooker. Number nine Michael McIlorum had struggled to impact the game, making just four metres with the ball and missing eight tackles.

That meant when England were chasing the game, Wane looked for a fresh approach with Radley at dummy half.

When the scores were tied at 20-all, it only looked like there would be one winner.

Unfortunately for the Sydney Roosters star, such was his involvement in trying to act as playmaker in the dying stages, it was his pass left that was snared by Crichton for the interception try that put Samoa 26-20 in front.

🇼🇸 Has Stephen Crichton won it for Samoa?

Game management at the death

England had the final possession of normal time and with seconds left, the excellent Elliott Whitehead broke through. In his desperation to find a gamebreaking moment, he flung a pass inside in the hope of it landing for a player backing up. But his break had dragged England in to drop goal range, something that had seemed unlikely, had he just took the tackle and enabled a set up on the next tackle.

And then in extra time, two errors gifted Samoa possession in England’s half. First, Jack Welsby’s mistake with a drop off pass attempt that became a knock on, and then Sam Tomkins’ forward pass from dummy half. Both of those errors set the platform for drop goal attempts for Samoa, the second of which proved the decisive moment.

England’s hopes of silverware now rest with the Wheelchair and Women’s teams, who are in semi-final action on Sunday and Monday respectively.