Jordan Abdull’s late drop goal earned Hull KR a win over Huddersfield, and they may well have felt aggrieved had there been any other outcome.

There were two major contentious decisions in what turned out to be a topsy-turvy second half, where the Giants fought back to lead before going down 25-24.

A key call came in the 54th minute, when Lee Gaskell failed to deal with a high kick, which then bounced favourably for Kane Linnett to score for the Robins.

But the video referee judged that Shaun Kenny-Dowall had grabbed Gaskell, who went down somewhat theatrically as a result, and ruled the try out.

To rub salt in the wounds, Huddersfield went up the other end and scored through Darnell McIntosh to ignite their comeback from 18-4 down.

“The grab is the penalty, especially for the video referee. The law doesn’t state what pound per square inch of force is classed as a grab, it states you can’t grab hold of a player who is not in possession of the ball, and the video referee has to go by the law and not what looks right.

“Unfortunately for the video referee, the player goes down like he has been shot but you can’t grab a player to prevent him turning around to attempt to the chase the ball, so it was the correct decision.”

The actions of Gaskell prompted criticism on social media, after he made the most of the contact.

While it is very rarely, if at all seen, unprofessional conduct that brings the game into disrepute can be punished by the officials.

The try that gave the Giants the lead was controversial too.

A short-kick from Adam O’Brien was fumbled by Chris McQueen over the try line, and he touched down after the ball hit the ground. 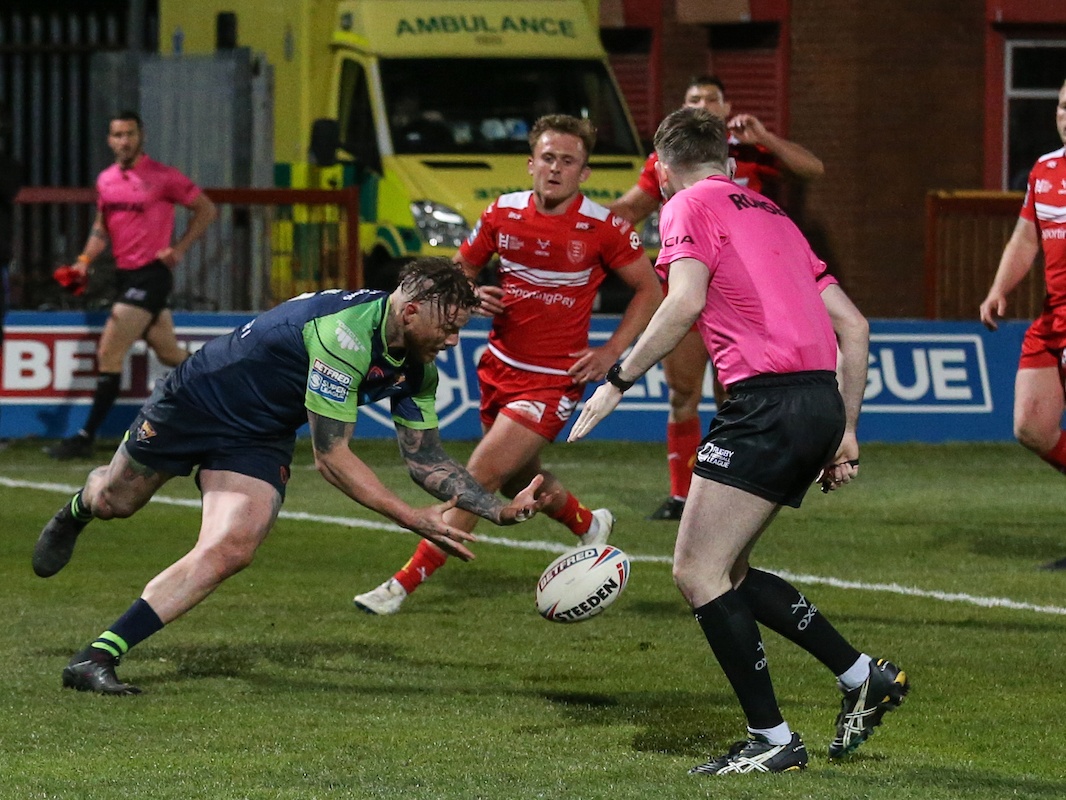 The on-field referee wasn’t convinced and looked set to rule it out, until his touch judge suggested sending to the video referee – it was sent up as a no try.

After analysing the incident, the video referee overturned that decision, much to the disbelief of the Sky Sports pundits.

Smith added: “It was a knock on for me.

“The ball has to go behind the point of where it was last touched. The ball is always travelling forward in my opinion.

“We have the benefit of pausing the TV and if you pause when he last touches, and then pause when it hits the ground, he over runs the ball but doesn’t touch it backwards.

“Maybe it should have gone with the on-field ‘no try’ call.

“The video referee has to always be by the letter of the law, and the referee in live play is a combination of both law and interpretation.”

The complexities of the laws are certainly raising much debate, and even die-hard fans are becoming confused by interpretations.

It makes a hard job even more difficult for match officials, who face increased scrutiny and criticism, when without them, there is no game.

About James Gordon 7301 Articles
Love Rugby League editor. Founded the website back in 2005. Worked with a range of clubs and sponsors during that time. Also commentates for BBC.
Website Twitter LinkedIn