Could the Challenge Cup and its magic be rejuvenated if Super League clubs entered the competition at an earlier stage?

11 top flight clubs, excluding Toulouse, entered the competition this year for the first time in the sixth round.

The thrill of the Challenge Cup has somewhat declined over recent years, alongside attendances.

Warrington faced Wakefield twice in eight days in league and cup. Their attendance for the latter was only 2,627 at the Halliwell Jones Stadium, a 5,537 decrease from their previous clash.

Whitehaven’s buzz leading up to their big day against current cup holders St Helens should be what the Challenge Cup is all about. A proper underdog story.

Having Super League clubs come up against each other again year after year in the cup has become somewhat boring.

Everyone predicted Warrington to draw Wigan in the cup once more (albeit they lost that place to Wakefield). Having new sides that Super League clubs could face could give the Challenge Cup the boost it desperately needs – and also provide great additional revenue to lower clubs who are facing more cuts every year.

Whitehaven saw a crowd of 4,869 for their big day in Cumbria – beating crowds at Warrington, Catalans and Hull KR. Likewise, Barrow’s tie with Huddersfield saw fantastic coverage in the lead up and was a great cup occasion live on the BBC. 3,135 attended the fixture at the Matt Johnson Prestige Stadium and were rewarded with a fantastic game.

Regardless of results, the likes of Rochdale, Swinton, Keighley or any League 1 or Championship team would no doubt welcome the idea of facing a top Super League side with so many possible positive impacts for their clubs. 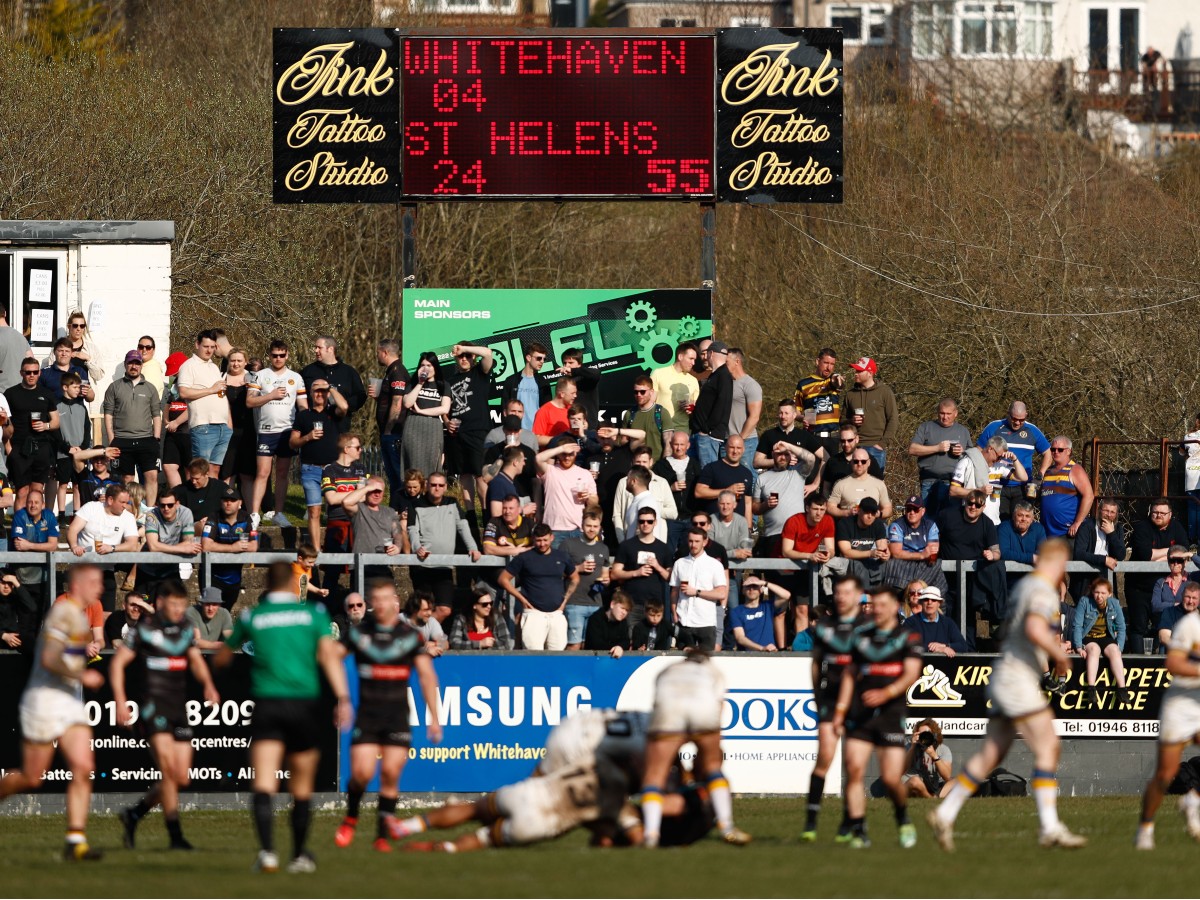 St Helens were greeted as superstars at the LEL Arena for their tie with Championship outfit Whitehaven.

That occasion should be exactly what the cup is about, and bringing in Super League clubs earlier would provide that opportunity.

St Helens coach Kristian Woolf compared the experience to the NRL’s ‘Country Round’.

“From the point of view of how we promote rugby league in different areas, I thought Saturday was an outstanding day,” said Woolf.

“I loved everything about it. I loved the feel of it. And I loved how the fans turned out and supported their teams and were really vocal.

“There were also really happy and excited about our players being there and the amount of people that stayed after the game outside the sheds to try and get a photo with players was outstanding as well.

“The feel was very much like the NRL Country Round where the NRL do take games to country areas and areas that don’t always get to see NRL players and games and promote the game through that. It’s very well supported and a similar occasion as to what Saturday was.”

Woolf cautious of asking too much from players

However, he did admit that the sport is already asking too much of its players throughout the season. Adding: “We play too many games at it is in the normal competition. When you add the Challenge Cup, mid-season international trials, those things that just keep adding on.

“The words player welfare gets said all the time and that’s not taken into consideration when we add on. That’s something that we need to have a look at as a competition.”

I for one as a fan wouldn’t mind a reduced Super League calendar to make way for some more Challenge Cup magic. And I’m sure many others would agree.

The cup hasn’t lost its touch completely, as the weekend saw. But the sport as a whole could definitely do more to reignite that spark.

About Josh McAllister 1320 Articles
Journalist. Joined the Love Rugby League team full time at the start of 2022 having been a freelance reporter for several years. Previously media manager for Swinton and Rochdale.
Twitter

Batley v Featherstone to be shown live on Sky

The Challenge Cup fifth round tie between Kingstone Press Championship sides Batley Bulldogs and Featherstone is to be shown live on Sky Sports.

The road to Wembley begins again

Forty grassroots Rugby League teams will set out on the Wembley trail later this month when the first qualifying round for the 2013 Challenge Cup takes place over the weekend of October 27-28.

The rugby league world has been very busy in the last 24 hours. [Read more…]