We have taken a look at the main talking points from round nine of the NRL campaign. 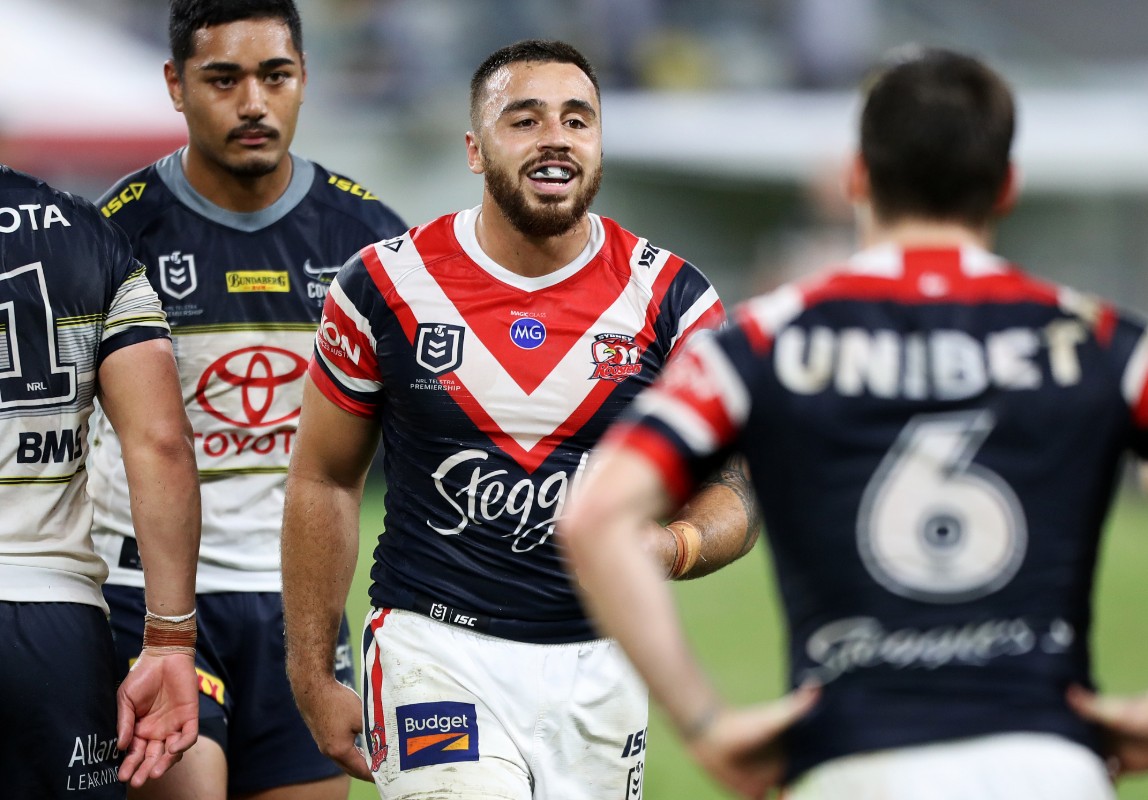 Matt Ikuvalu scored five tries as the Roosters got back to winning ways by thrashing North Queensland.

Drafted in after an injury to Brett Morris, the winger became the first Rooster to cross five times since Brian Allsop in 1955 and the first player in the NRL since 2017.

Luke Keary also starred with a couple of tries while James Tedesco grabbed two assists as the reigning premiers made a mockery of their extensive injury list which also included Daniel Tupou and Victor Radley.

It was another disappointing afternoon for the Cowboys who became the first team in 43 years to have a player score four or more tries against them in consecutive weeks after Maika Sivo’s four-try haul for Parramatta.

Paul Green also saw Valentine Holmes limp off with an injury but the form of Reece Robson is a consolation, with the hooker grabbing two tries.

North Queensland have another tough test against Penrith next week while the Roosters host Canberra.

Stat of the match: 9 – The Roosters’ forward pack made 298 tackles on Thursday and only missed nine. 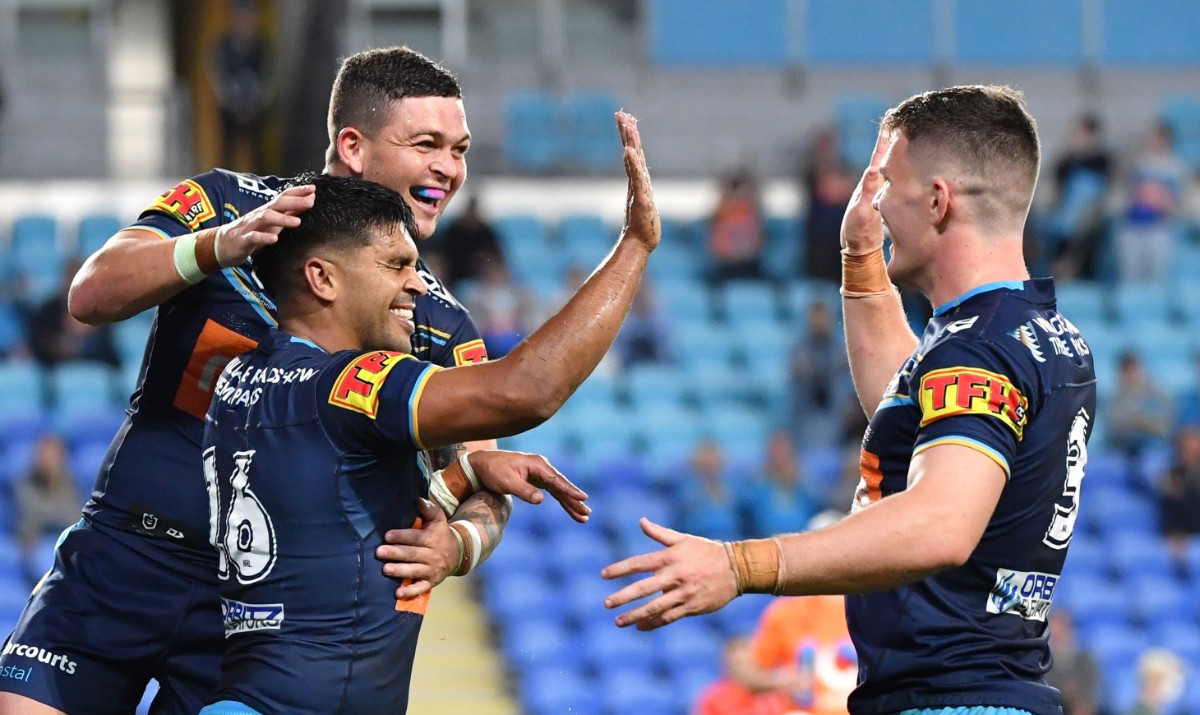 The Gold Coast continued their improved form with a narrow victory over the Warriors.

Beau Fermor’s late try gave the Titans a third win of the season, having won four matches in the whole of 2019.

They had to recover from a poor start which saw them 10-0 down early on but tries from Anthony Don and Sam Stone set up the grandstand finish.

For the Warriors it was a setback after their impressive victory against Brisbane last time out although they were able to welcome back Roger Tuivasa-Sheck who scored his 50th NRL try.

However, loan signing from Penrith Jack Hethrington again impressed, a boost for Todd Payten with Ken Maumalo, David Fusitu’a and Agnatius Paasi returning home after the Cronulla match next week.

The Titans will aim to make it consecutive wins against Melbourne with the Warriors playing the Sharks.

Stat of the match: 81 – The Titans’ all-time record try-scorer Anthony Don has now scored 81 tries for the club since 2013. 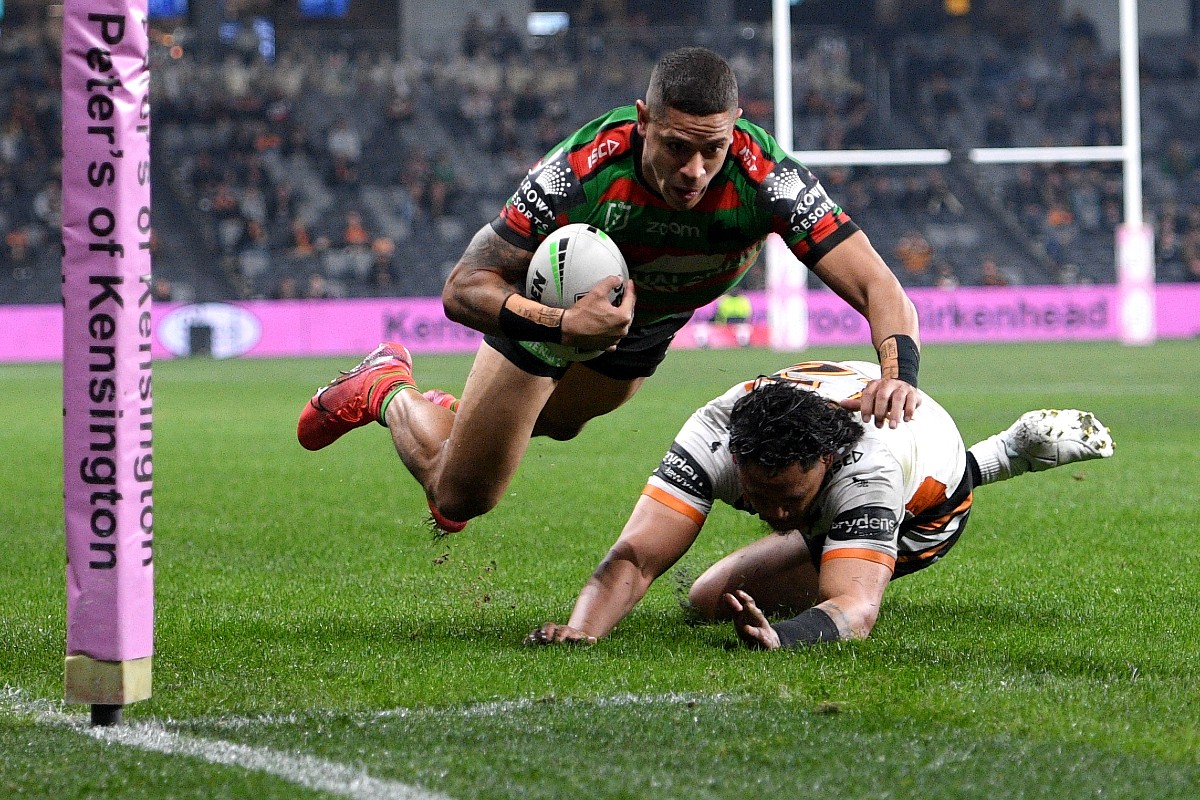 The winger crossed twice in the first half before completing his treble after the break.

He was indebted to a fine performance from Adam Reynolds who assisted him once and set up another for James Roberts.

Both Josh Reynolds, who caught Campbell Graham with a mistimed kick at the ball and Latrell Mitchell for catching Reynolds with a swinging arm, have been charged following the incident in the early stages and will miss two matches.

The Bunnies will look to cement a top eight place against the Knights as the Tigers will look to break into the top half playing Brisbane.

Stat of the match: 192 – Dane Gagai had played 192 first-grade games before clocking a first hat-trick. 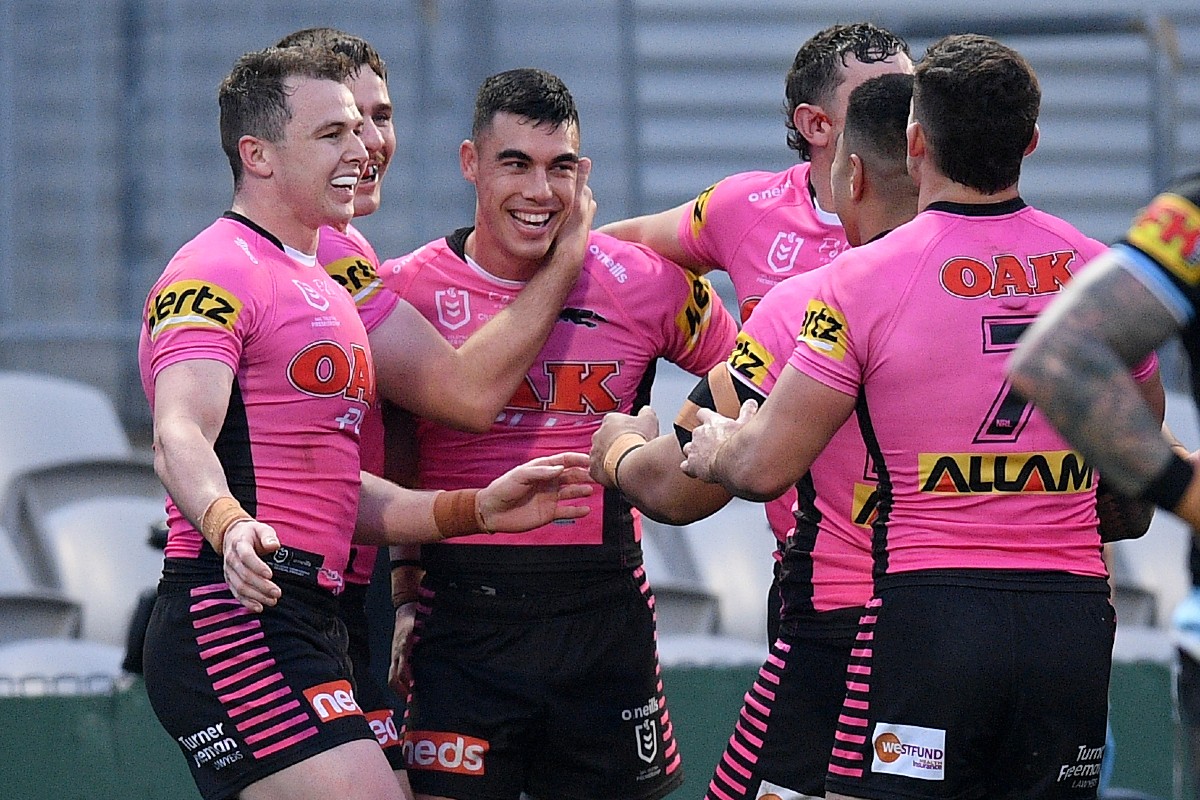 After an opening period score, the 19-year-old grabbed a further three tries after the break to become the first player on debut to score four tries in a match since Jordan Atkins in 2008.

A first half blitz which saw the Panthers cross five times effectively sealed the win as they racked up the most points they have ever put past the Sharks.

Stephen Crichton notched a double as Brett Naden, Liam Martin, Dylan Edwards and Billy Burns also crossed but Panthers coach Ivan Cleary played down their Premiership hopes: “A premiership threat would not have let in 24 points today. We still have a lot of work to do.”

The Sharks hit back late in the first half through Briton Nikora and Blayke Bailey but further scores from Jesse Ramien and Nene MacDonald were too little too late.

Stat of the match: 50 – The last time Cronulla conceded 50 points was also against the Panthers in round 26 a decade ago. 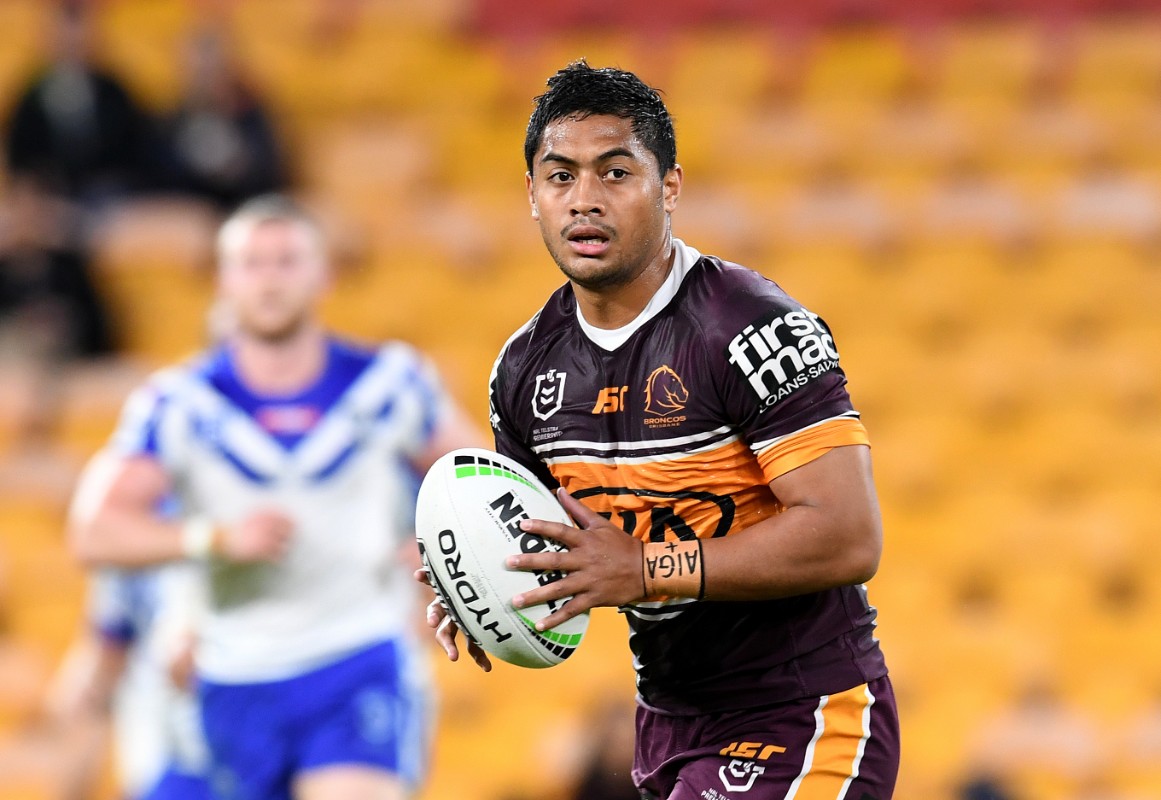 Tevita Pangai Junior and Xavier Coates crossed as the Broncos burst into an early 10-0 lead and never looked back.

In a scrappy affair, Anthony Milford stood out with his kicking game although captain Alex Glenn was forced off with a suspected medial injury after a cannonball tackle by Reimis Smith.

For the Bulldogs it was a missed opportunity to gain a rare win but they were boosted by the debut of Luke Thompson.

The prop, who joined early from St Helens, impressed running for 86 metres in his hour-long appearance.

Brisbane will hope to breathe life into their campaign with another win against Wests Tigers while Canterbury face St George Illawarra.

Canberra could not continue their dominance over Melbourne as they fell to a narrow defeat in their first home match since the restart.

Although they failed to be the first side since 2013 to beat the Storm in four consecutive matches, their primary concern will be hooker Josh Hodgson.

Their captain suffered an ACL injury after and will miss the remainder of the season alongside Bailey Simonsson who suffered a shoulder injury.

Hodgson set up Josh Papalii for a first half try before Simonsson was sin-binned which contributed to Melbourne leading at the break.

Elliott Whitehead was then adjudged to have knocked on while sliding over the line before Storm full-back Ryan Papenhuyzen raced 85 metres to seal the game.

The Raiders will look to bounce back against Sydney Roosters while Melbourne, who saw captain Cameron Smith become the first player to chalk up 300 NRL victories, play the Titans.

Parramatta edged a scrappy affair in Newcastle to continue their fine start to the season.

Maika Sivo sealed the deal for the Eels as they earned a rare win against the Knights having lost 11 of their last 14 encounters.

Reed Mahoney was the standout for Brad Arthur’s side, making 66 tackles and offering a strong running threat, including assisting Ryan Matterson’s first half score.

His form shows the competition Queensland have for the hooker position in the coming years with Wests Tigers’ Harry Grant impressing.

For the Knights, Kalyn Ponga had another disappointing afternoon and Bradman Best has now failed to score in his last four matches.

In their first game back at McDonald Stadium, Adam O’Brien’s men lacked creativity in what has been an inconsistent run.

Newcastle will play at Bankwest against the Rabbitohs while the Eels face a trip to Manly.

Stat of the match: 3 – Parramatta have only conceded a second half point in three matches in 2020 after another shutout against Newcastle. 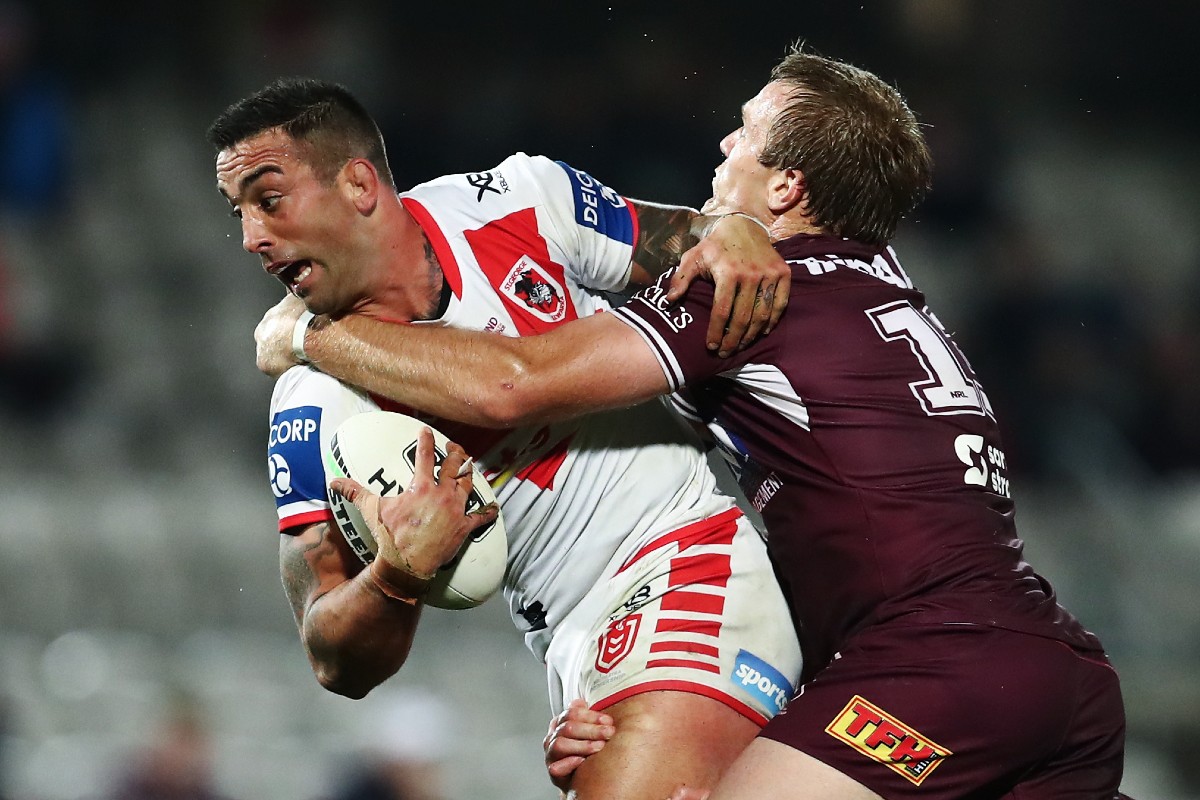 St George Illawarra put in an impressive showing as they eased past Manly at Netstrata Jubilee Stadium.

Again, Ben Hunt shone at dummy half with a try assist, zero missed tackles and an outstanding kicking game.

For the Sea Eagles, they have unsurprisingly suffered since full-back Tom Trbojevic’s injury, scoring just 34 points in the three matches he has missed.

With Addin Fonua-Blake also missing next week as well as the injured Dylan Walker, they face a battle on their hands to ensure they play in the finals.

The Dragons will aim to back this up when they face Canterbury with Manly playing Parramatta.