We’ve previewed each game in round four of the NRL campaign.

The Panthers head into the fourth round of the season on a huge high after overcoming reigning champions Melbourne in one of the games of the season so far. The best betting sites in Australia will have the Panthers right up there to go one step further in 2021.

The result will have been a sweet one as they avenged their Grand Final defeat to the Storm and now with that will be full of confidence as they face a struggling Manly side. The Sea Eagles remain rock bottom without a win but a victory at home will no doubt inject some confidence into Des Hasler’s side as they look to find some momentum.

Team news: Manly make one change as Morgan Boyle moves to the interchange with Toafofoa Sipley dropping to extended bench.

A reshuffle for Penrith as Stephen Crichton moves to full-back with Dylan Edwards (hand) out while Matt Burton goes to centre and Nathan Cleary returns at half-back.

This Good Friday match up may not have the same appeal as it has done in earlier years, but South Sydney will still have to make sure they have a great deal of focus if they want to make it three wins in a row. The Rabbitohs are fresh off a convincing win over the Roosters but have still been known to be complacent at times this year. The Bulldogs still seem to be a work in progress under Trent Barrett as their attack will quickly need some find some cohesion after not registering a single point in the last two rounds.

Team news: A few changes for the Bulldogs as Lachlan Lewis replaces Jake Averillo at stand-off while Sione Katoa is the new man at hooker with Jeremy Marshall-King (foot) out. Josh Jackson (suspended) is also out, so Renouf Atoni is in at 13.

No changes for South Sydney as they stick with the same 17.

After 259 days, Brisbane finally secured an elusive victory as they defeated Canterbury with a late flurry of tries. However, you would think the time for celebration may not have lasted long as they go on to face a Melbourne side out for redemption after their loss to Penrith. The Storm may have lost their last two in a row but losing a third its not usually in their DNA so you can imagine Craig Bellamy will be looking to light a fire under his side and come out swinging.

Team news: Ryan Papenhuyzen (neck) looks set to return at full-back for Melbourne while Tom Eisenhuth has been named despite suffering rib cartilage damage against Penrith.

Payne Haas and Matt Lodge are back for Brisbane and provide a huge boost to their forward pack. Tevita Pangai Junior and Tom Flegler move to the bench.

The Cowboys come into this one desperately wanting to kickstart their season and earn their first win of the year. They now face a Cronulla side in the midst of a potential injury crisis as they were forced to play without bench players in the loss to the Eels as four players left the field with either concussion or a knee injury so it will be an anxious wait to see if any players are able to pass HIA protocols and take to the field this Saturday. However, if the Cowboys still want to come away with a win, then more assurance will be needed in defence as they have given up 93 points in the first three games.

Team news: Both Will Kennedy and Wade Graham have been named to play for Cronulla but will need to pass concussion protocols before taking the field. Briton Nikora (suspended) is out and his spot in the back-row will be taken by Teig Wilton. Sione Katoa (MCL) is also out, with Mawene Hiroti the new man on the wing.

A reshuffle for the Cowboys sees Ben Hampton and Connelly Lemuelu come into replace Jake Clifford and Esan Marsters. 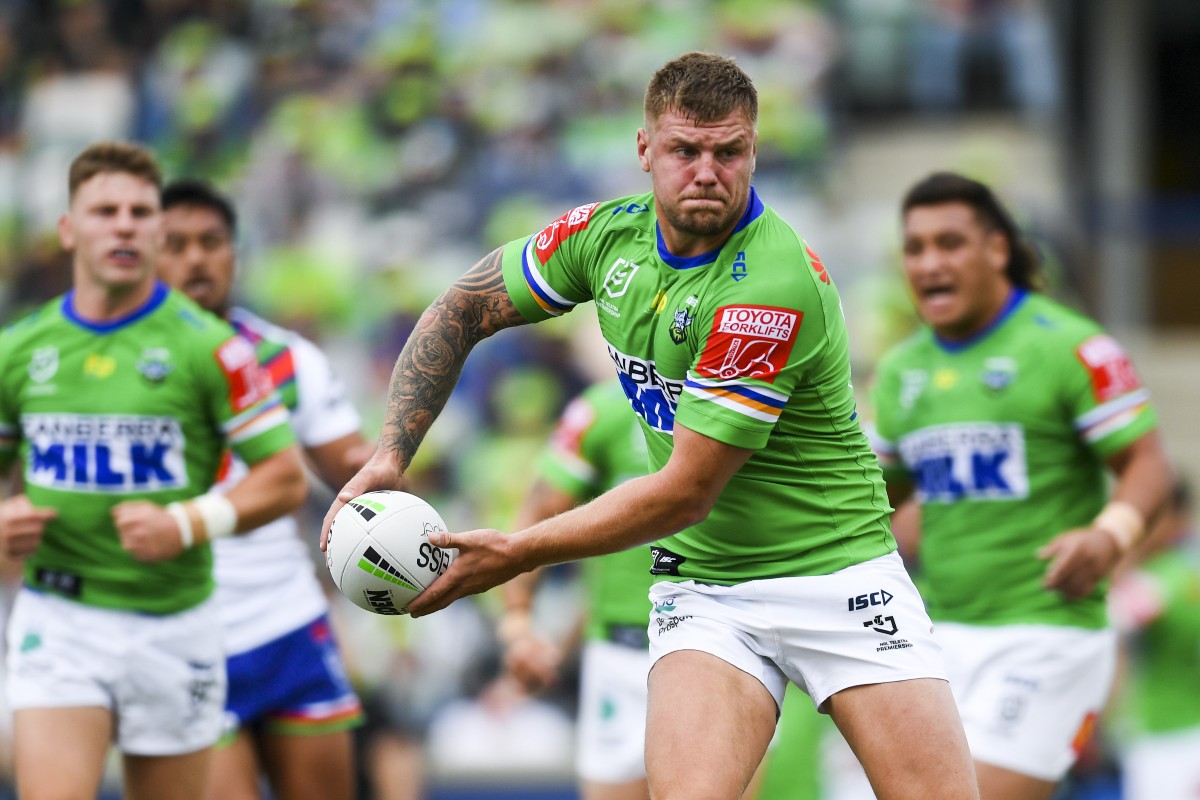 A potential game of the week contender sees an exciting and improving Gold Coast side take on Canberra who will be looking to bounce back after giving up a 31-10 lead against the Warriors to lose 34-31. After a first round blip the Titans are back and firing after two straight wins in decisive fashion, meanwhile, the Raiders may have seen defeat last week but have already shown in the early stages of this season they are a side that could be up there near the top of the ladder come the end of the season once again.

Team news: Gold Coast name an unchanged 17-man squad while Brian Kelly (hand) is on the extended bench outside the main 17.

Hudson Young and Dunamis Lui have been named to return to Canberra’s forward pack while Sebastian Kris moves to centre for the injured Curtis Scott (ribs). Joe Tapine (ankle) is also out, so Ryan Sutton is named at lock.

The Knights looked great throughout the first two rounds but will be looking to get back on track after the loss against the Tigers last week. They now face a St George Illawarra side that seem to have found some confidence in recent weeks after recording back to back wins. A tough Newcastle forward pack consisting of the likes of Jayden Brailey, Daniel Saifiti, Mitch Barnett, Tyson Frizell, Connor Watson and David Klemmer has been instrumental for Newcastle thus far and they will certainly be called upon again to contain a Dragons backline that features Matt Dufty, Zac Lomax, Cody Ramsey and Corey Norman all of whom were in red hot form against Manly.

Team news: Gehamat Shibasaki moves to centre for the injured Bradman Best (ankle) while Blake Green could make his return for Newcastle from the interchange. Dom Young moves down to the extended bench.

No Jack Bird (suspended) for the Dragons with Brayden Wiliame in at centre while Adam Clune is in at seven for Ben Hunt (fibula fracture).

The Roosters came out of their loss to the Rabbitohs completely battered and bruised after losing key players Luke Keary and Lachlan Lam to long-term injuries. The loss of such an influential player in Keary could prove to be a massive factor going forward especially for their title aspirations. They now face another difficult task here as they take on a Warriors side feeling good after overturning a 31-10 deficit against Canberra in round three. Despite two key personnel losses for Sydney, there remains plenty of resolve and elite talent in the Sydney side with James Tedesco and Brett Morris being very impactful so far this season.

Leeds-born youngster Sam Walker is set to make his debut for the Roosters. The 18-year-old half-back is the son of former Leeds player Ben Walker. The Australian played for the Rhinos in the 2002 season when Sam was born.

Team news: With Keary (ACL) and Lam (MCL) both out for Sydney, the Roosters bring in youngster Sam Walker and Drew Hutchison into the halves. Victor Radley is set to return at loose forward.

Marcelo Montoya replaces Peta Hiku (knee) at centre for the Warriors while Bayley Sironen moves into the starting second-row for Jazz Tevaga.

An under-pressure Tigers were able to overcome an in-form Newcastle side last week but have it all to do here as they take on undefeated local rivals Parramatta. The win against the Knights will have undoubtedly given the Tigers plenty of confidence and they will need a performance of a similar magnitude here, if not better, as the Eels have seen off Brisbane, Cronulla, and reigning champions Melbourne in the first three rounds.

Team news: The Tigers avoid injury and name the same 17 that beat Newcastle in round three.

Ryan Matterson is back in the Eels’ second-row and Mitch Moses has been selected but must pass concussion protocols.