The third round of the NRL season is upon us.

What a way to kick off round three as Penrith and Melbourne do battle in what is set to be a high-octane rematch of last year’s Grand Final. The Panthers are on fire right now and remain undefeated through the first two rounds without conceding a single point. That could all potentially change here though as they face a Melbourne side out for blood following a tough loss to Parramatta last week. Both sides boast some of the finest attacking and defensive talent in the league and overall, this game proves to be one you cannot miss as two of the league’s most fearsome sides go head to head.

Team news: Nathan Cleary has been named for Penrith but will be monitored for any concussion symptoms in the lead up while Api Koroisau (broken wrist) is set to miss next the month. Mitch Kenny takes up the hooker role.

Tom Eisenhuth comes in for Felise Kaufusi (suspended) while Aaron Pene and Nicho Hynes are the new faces on the bench.

The Dragons kickstarted their season last week with a gutsy and determined win over North Queensland at Townsville. Both Corey Norman and Ben Hunt rediscovered some form to help give Anthony Griffin his first win in charge. They now return to Wollongong and face a Manly side who have struggled to get their own season underway as they remain without a win. The Sea Eagles’ half-back duo of Kieran Foran and Daly Cherry-Evans will have to find some cohesion soon and despite being only two rounds in they will not want to run the risk of falling behind.

Team news: No changes for the Dragons as they name the same 17.

Andrew Davey (ACL) is out for season, so Josh Schuster has been named to take his place in Manly’s back-row. Cade Cust is in concussion protocol so will be monitored.

The last game on Friday sees one of rugby league’s oldest rivalries ignited as the Rabbitohs and the Roosters are set for another intense showdown. There have been some incredible match-ups between this pair with the latest seeing Rabbitohs earn the bragging rights following a comprehensive 60-8 win last season. Both sides have some of the finest attacking quality in the league with James Tedesco and Brett Morris scoring tries for fun right now while the likes of Cody Walker and Latrell Mitchell continue to pull the strings for the Rabbitohs.

Team news: Jaxson Paulo (concussion) is out for the Rabbitohs, so Josh Mansour has been recalled to the wing. Adam Reynolds has been named but will be another player under concussion protocols.

Victor Radley is set to return from a serious knee injury off the bench for the Roosters while Angus Crichton is also back following a one-match suspension. Youngster Sam Walker has been named on the extended bench and could make his NRL debut.

The Raiders are another side undefeated through the first two games of the season with English duo George Williams and Josh Hodgson instrumental to their success. They now face the Warriors at GIO Stadium who came away with a surprising win over the Titans in round one before losing a close encounter against Newcastle in week two. It will be another tough affair for Nathan Brown’s side here but if the Warriors’ efforts over the last year are anything to go by then they will prove to be a tough side to break down.

Team news: Jarrod Croker is back at centre for Canberra following off-season surgery on his shoulder.

Chanel Harris-Tavita (foot fracture) is out for at least 12 weeks, so Sean O’Sullivan comes in at half-back for the Warriors. Jamayne Taunoa-Brown is suspended so Bunty Afoa is in at prop.

The Broncos’ losing streak has now stretched to 13 games following their defeat to Gold Coast with new coach Kevin Walters proving to have a tough task on his hands. Meanwhile, Canterbury’s new coach Trent Barrett faces his own struggles as the Bulldogs look for consistent wins themselves. It is still early days in the season just yet though, so better days maybe ahead and both teams have the perfect opportunity to regain some confidence here as an experienced Canterbury forward pack go up against Brisbane’s youthful talent.

Team news: Brisbane are handed a huge boost as Payne Haas is back from suspension.

Raymond Faitala-Mariner (broken foot) is set to be out for 20 weeks, so Corey Waddell starts for Canterbury. Dallin Watene-Zelezniak (suspended) is replaced by Tuipulotu Katoa.

The Eels have had a strong start to the season and will be full of confidence after producing an outstanding effort to see off Melbourne in wet conditions at Bankwest Stadium. They now look to make it three wins from three as they take on Cronulla who have been a side that Parramatta have struggled against in recent years. The Sharks have a had somewhat of a positive start to the year themselves and after a dominant win over the Dragons they made life difficult for Canberra despite it ending in defeat.

Team news: One big change for Parramatta as Ryan Matterson (concussion) is out so Isaiah Papali’i starts in the second-row.

Connor Tracey is called up to centre for Cronulla with Mawene Hiroti dropping out. 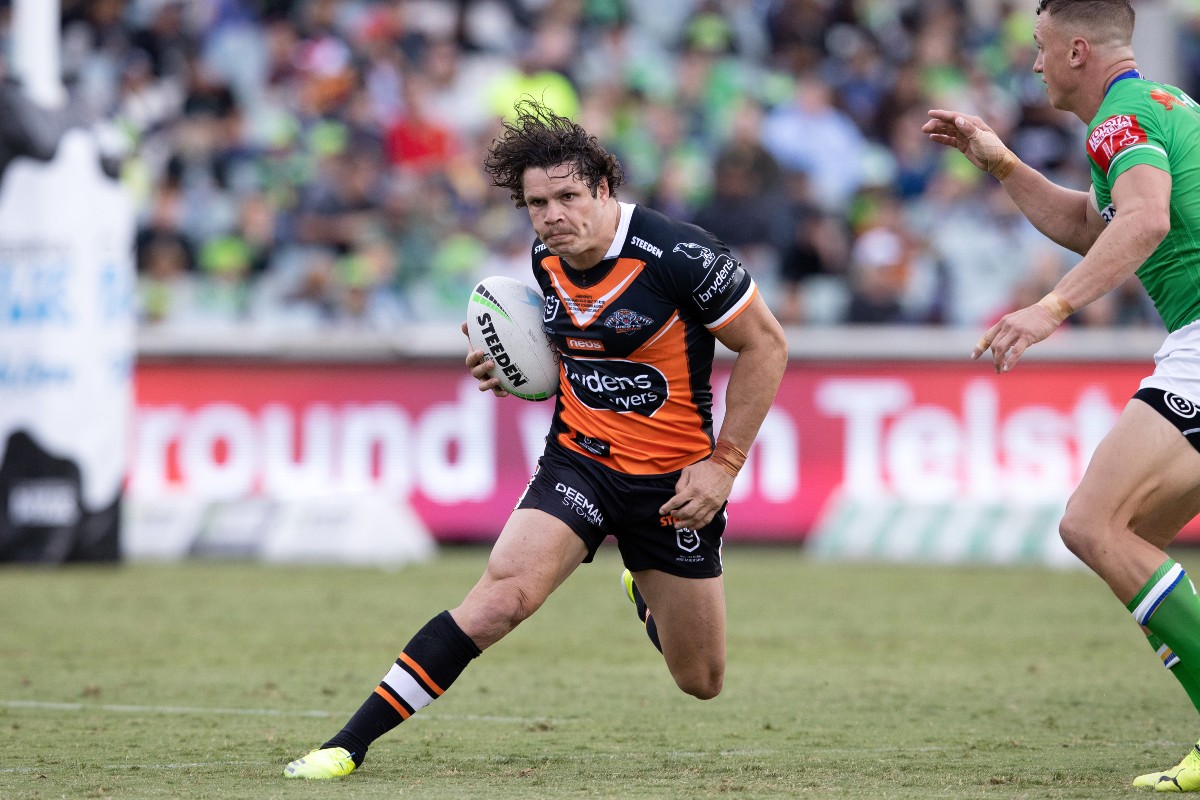 The Knights come into this one with plenty of momentum behind them after winning their first two games and they have a chance to extend that run here as they face a Tigers side that has leaked points throughout the first two games. If Michael Maguire’s men want to find themselves in top eight contention this year, then they will certainly want to get their season up and running here and avoid a third straight defeat to start the year. This game will also see Newcastle’s Mitchell Pearce mark his 300th appearance in the NRL.

Team news: Kurt Mann (knee) has been named for the Knights despite withdrawing late on in the win over the Warriors. Nathanael Sasagi has been named on the extended bench with Phoenix Crossland suspended.

James Roberts is back at centre for the Tigers with Joey Leilua dropping out of main 17-man squad. Joe Ofahengaue is on the bench as Zane Musgrove is back from suspension in the front-row.

After overcoming Brisbane last week, Gold Coast’s hype looks to be welly and truly back as they look to be a rather interesting and exciting team to keep an eye on. The acquisitions of premier talents David Fifita and Tino Fa’asuamaleaui proving dividends thus far with the former grabbing a brace of tries against Brisbane in round two. They now take on another Queensland rival in the Cowboys and will have every opportunity here to keep building some momentum as North Queensland were shutout against Penrith in round one before losing their grip on the game against the Dragons despite looking impressive for the most part.

Team news: Kyle Feldt (suspended) is out for North Queensland, so Murray Taulagi is called up to the wing.

The Titans make one change as Ash Taylor (hand) is forced it sit out with Tanah Boyd taking his place in the halves.

Jake Trueman: There is more pressure on me and Castleford this year

Castleford ace Jake Trueman has admitted there’s pressure on him to deliver in the absence of Luke Gale and after taking the number six shirt at the Tigers. [Read more…]

The moment it hit home that Justin Holbrook was leaving St Helens was when they were on the team bus going to Old Trafford.  [Read more…]

Wests Tigers have received a blow on the eve of their NRL campaign after receiving news that Benji Marshall has been caught up in an alleged fight.