The NRL semi-finals have arrived and we have two mouth-watering clashes set to come our way.

Despite seeing off the Roosters to end their regular season, the Rabbitohs got a huge wake up call in last week’s qualifying finals as they faced off against their arch rivals once again but this time they just had no answer for Trent Robinson’s men when it mattered most. The Bunnies were completely out done in the first half against the Chooks, with a lack of decent possession and attacking flair missing from Souths. The unavailability of influential duo Dane Gagai and Sam Burgess was seemingly a pivotal factor but now there can be no excuses this week as they face off with Manly in a do-or-die elimination match-up, with the winner booking a date with Canberra in the preliminary finals.

The Sea Eagles were able to overcome injury problems and suspensions in an inspired effort over Cronulla in the first week of finals action. Even without the likes of Tom Trbojevic and Curtis Sironen, Martin Taupau and Joel Thompson, Des Hasler’s men overcame the odds with their backs against the wall to defeat the Sharks 28-16. The
the duo of Daly Cherry-Evans and Addin Fonua-Blake stood up to the plate to shine and keep their NRL hopes alive.

Now, if this season’s results are anything to by then this match-up promises to be one to watch, with both games during the regular season going right down to wire. The Rabbitohs were handed their first loss of the season by Manly back in round four with a 13-12 defeat at Lottoland before Wayne Bennett’s men were able to flip the switch with a 21-20 win at ANZ in round 17.

After being outshone by Luke Keary and Cooper Cronk last week, both Cody Walker and Adam Reynolds need an 80-minute performance with Dylan Walker and Cherry-Evans being their opposite numbers this time around. In an improved second half against the Roosters, Reynolds was the prime catalyst and looked his dangerous self going forward and scored the only try of the game for the Rabbitohs. The same kind of attacking mindset is going to be needed here from the scrum-half as well as a big effort from the returning Sam Burgess. There is no doubt the Rabbitohs have exactly what it takes the win this.

Manly will still be without Tom Trbojevic, so the emphasis is going be on Cherry-Evans and Fonua-Blake once again to lead from the front. The Sea Eagles’ forward pack still has to prove itself but with Jake Trbojevic and the returning Martin Taupau in the mix, then Souths could still have their work cut out.

Team news: Even though Sam Burgess could be in hot water over his recent comments about the NRL judiciary system, the second-rower is still named after missing the game against Sydney due to suspension. There is another boost for Souths with Dane Gagai set to return from a hamstring problem and Tom Burgess is selected at prop after being on the bench last week. George Burgess makes his way to the interchange.

The partnership of Fonua-Blake and Taupau in the Manly front-row is back in full force as the latter makes his way back from suspension. 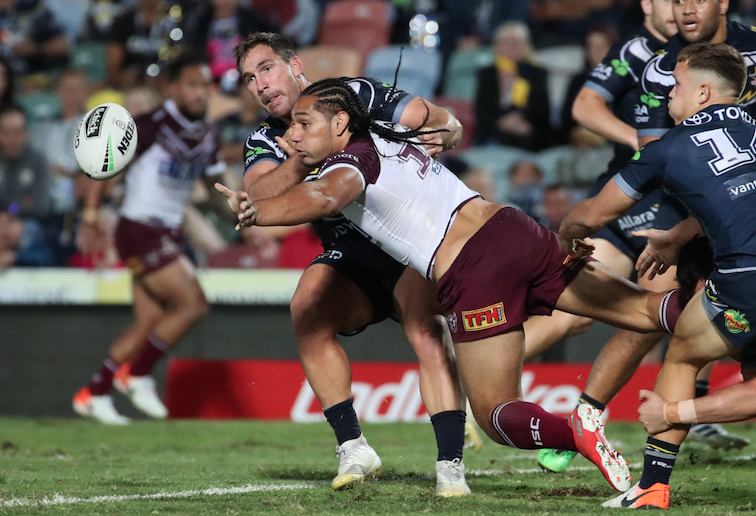 The chance was there for the Storm last week to put themselves within a game of the Grand Final but in the end, Canberra would not be denied by coming away with a last-minute win. Now, decisions may not have gone their way at the end, with Susliasi Vunivalu controversially being called in touch but Craig Bellamy’s side cannot let it effect them and need to come out with the same mentality that saw them finish as Minor Premiership winners.

The Eels are undoubtedly full of confidence after an 11-try mauling of an out-of-sorts Brisbane side last week and will come into this game all fired up to take on the Victoria-based side in an all or nothing clash, where the winner will face the Roosters in next week’s preliminary finals. However, this will not be at the fortress that is Bankwest Stadium as they walk into the arena that is AAMI Park, which is a test in itself.

There is no question that this has been one of Parramatta more surprising seasons though as many tipped them to finish outside the top eight this season. However, half-back Mitchell Moses has worked his magic throughout the year and after the game against Brisbane, he was the name on the lips of everyone. The Lebanon international was the star of the show last week and if Moses can put forth at similar showing against Melbourne then that surprising season might just continue. It is not only Moses that Melbourne will have to contend with as the power and speed of Maika Sivo and Blake Ferguson on the wings can cause plenty of disruption.

The Storm know exactly what they need to do and both Cameron Munster and Cameron Smith will play a big part in allowing that formidable forward pack featuring the likes of Jesse and Kenny Bromwich, Felise Kaufusi, Dale Finucane and Nelson Asofa-Solomona to push forward and put their side on the front foot right from the start.

Team news: Storm decide to stick with the same squad that suffered a loss to the Raiders, with Brodie Croft’s season looking pretty much over as he is named in the reserves once again, with Munster’s recent shoulder injury looks to be causing no trouble for the Storm playmaker.

The Eels’ front-row sees a reshuffle, with Kane Evans back from suspension and partners Junior Paulo at prop forward, with Daniel Alvaro making his way to the bench.