Hayne, 33, will spent at least the next three years and eight months in jail after being found guilty of two counts of rape.

Williams, who lined up alongside Hayne for NRL side Parramatta Eels back in 2018, took to Instagram to state that the justice system had “sent an innocent [brother] to jail.”

Hours later, Freedom cut ties with Williams and released a statement which read: “As a club we are dedicated to growing the great sport of rugby league and are committed to it always being an inclusive, safe and family-oriented environment.”

Samoan international signs for the Rhinos 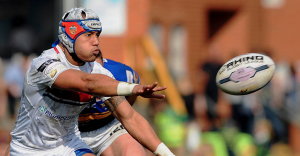 Atlanta Rhinos have bolstered their ranks ahead of the inaugural NARL season with the capture of Samoa international Pita Godinet.

The 33-year-old has appeared in two World Cups and boasts a number of clubs on his decorated CV, including Super League side Wakefield and NRL clubs New Zealand Warriors, Manly Sea Eagles and Wests Tigers.

Capped 15 times by his national team, Godinet has most recently been a part of the French Elite 1 Championship with Villeneuve.

Kiwi prop John Talisa’s move to Atlanta has also been confirmed ahead of the new NARL season.

Talisa, 23, joined Lezignan on loan from Villefranche after the Elite 2 season was curtailed due to the pandemic.

Brooklyn Kings have announced that they have retained three of their 2019 Championship-winning side.

Kevin Reed Jr., Connor Donehue and Tim Stubbs have all committed to the club for 2021.

Reed Jr. notably appeared on Australian reality TV show The NRL Rookie in 2016 and has also been included in the USA Nines squad.

The NARL is a 14-team competition that will play its first round of games on the weekend of June 19 in Brooklyn and June 20 in Las Vegas.