Michael Shenton reflects on his career so far with Castleford and St Helens, leading his hometown club and his upcoming testimonial match against Toronto Wolfpack.

Shenton, 33, began his career at Castleford having gone through the Tigers academy, before making his professional debut in 2004 against Wigan.

He went through two relegations with the club to the then-National League 1, while making a name for himself in the rugby league scene that saw him compared to NRL legend Luke Lewis by former coach David Woods.

“I have all different kind of different memories,” said Shenton, reflecting on his career.

“Good, bad and tough. The club getting relegated in my early years was one of the toughest. It was a tough time coming through that kind of era at the club. But then to be a part of the team that got the team back to Super League was one of the best times I have had as well.

“I had some rollercoaster years at the beginning as a young player. I learnt so much and it gave me an opportunity to play a lot of rugby at a young age playing in the Championship. It was a massive part of me turning into a rugby player. Playing at that level was tough, there was some extremely good players in that level so I learnt so much in those times and made some quality friends as well.

“The first time [of relegation] I was young, 18 or 19 and I was playing at that level with a lot of quality players and teams and we were the target team. Everyone wanted to come after us. I felt we were the team to beat and we had to be on it and everyone seemed to raise their game against us.

“I learnt a lot and was a bit of a target on the wing and centre as a young player. I can’t complain, it was awesome to play for my home team and to play so many games at a young age and it helped me to be the player I’ve become. It was massively important to me in the early stages in my career.

“We won promotion by beating Whitehaven over at Widnes and it was incredible with the response we got from the fans. It got the club back where I feel they deserved to be, a Super League team and we’ve firmly established that. It’s massively pleasing when I look back at how far the club and the team has come. It’s great.”

2010 was to be the end of Shenton’s first spell at the club, leaving the side as the second-longest serving player behind teammate Craig Huby, to join St Helens on a three-year deal.

He went on to make 58 appearances for Saints, including a 2011 Grand Final appearance, in a spell in which he is thankful for in his career which helped him become the leader that he is today.

“It was a challenge that I really wanted to take up,” he said.

“I went over there and I had a great time and made some friends for life. I enjoyed my time there.

“Unfortunately, it didn’t work out as long as I wanted to be but things happen for a reason and the opportunity to then to come back to Castleford having learnt so much, not only on the rugby field but behind the scenes and how their culture is run.

“It was a successful team with such quality players with the likes of Paul Wellens, Jon Wilkin, James Roby and James Graham. What they established there and their culture and things like that, it taught me a hell of a lot of what a club should look like both behind the scenes, in training and on the field and the expectations and the standard.

“I think it was a big turning point in my career to help turn into some kind of leader and somebody that can stand forward. I look back and I think I’ve learnt so much at my time there. I didn’t get the performances I wanted to on the field at times, but what I learnt as a person and as a player was great for me. 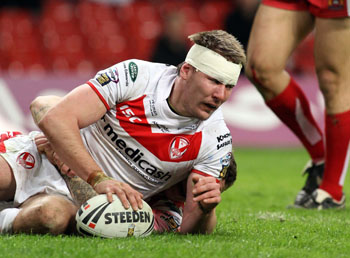 His return to Castleford in 2013 saw him appointed as club captain, and the Tigers were transformed by coach Daryl Powell.

That led to Shenton being able to lead out his hometown club at Wembley, for the 2014 Challenge Cup final defeat to Leeds.

The England international would miss much of the 2016 season with an ACL injury, but returned to 2017 to captain Castleford to their first ever Grand Final, after they had romped through the regular season to win the League Leaders’ Shield.

“I wasn’t expecting it,” said Shenton on his captaincy call up.

“I didn’t go back with that intention, I went back thinking that I wanted to be part of the leadership group and get back to playing my best rugby and that’s what I was focusing on really. I was still pretty young and I had to learn quite a lot and quite fast. It’s quite a difficult job being club captain, so there’s lots to learn and to know about people and things like that.

“I feel like I’m still learning stuff now, it never ends. I’ve got a lot better at it, but it never ends and learning as your team is always evolving and how you’re playing the game. You’re always having to change and improve as a person and as a player.

“People sometimes say never go back to where you’ve come from type of thing, but for me it worked out really well. I’ve played my best rugby since I came back. Having Daryl Powell coach us, one of the best coaches in the game has helped. I owe a lot to him and the other staff like Ryan Sheridan and Danny Orr, I owe a hell of a lot to the people around me and the support I get is fantastic as well.

“When I came back, we weren’t in the mix for that kind of stuff [finals]. It’s quality that we’re now competing at that level and it’s where we want to be.

“I’m not satisfied though. They are proud moments, but at the same time, for me, I’m not satisfied. I don’t think I ever will be until we take that next step and lift some silverware. With the quality of players we’ve got and the culture we’re developing, I do believe we can challenge again this year and yeah it’s alright looking back, but I’m not there in my career to do that.

“I’m still looking forward, I’ve got a year or two left in me to play at the highest level. I’m still not satisfied with what we’ve done and I think we can definitely challenge again and give ourselves the opportunity to win something.

“The League Leader’s Shield and 2017 was a big year for me. It was personally one of my best and one of the best the clubs had. The club had won trophies but had never won the league title. It was a big moment and it meant a lot and you can see that when we celebrated. 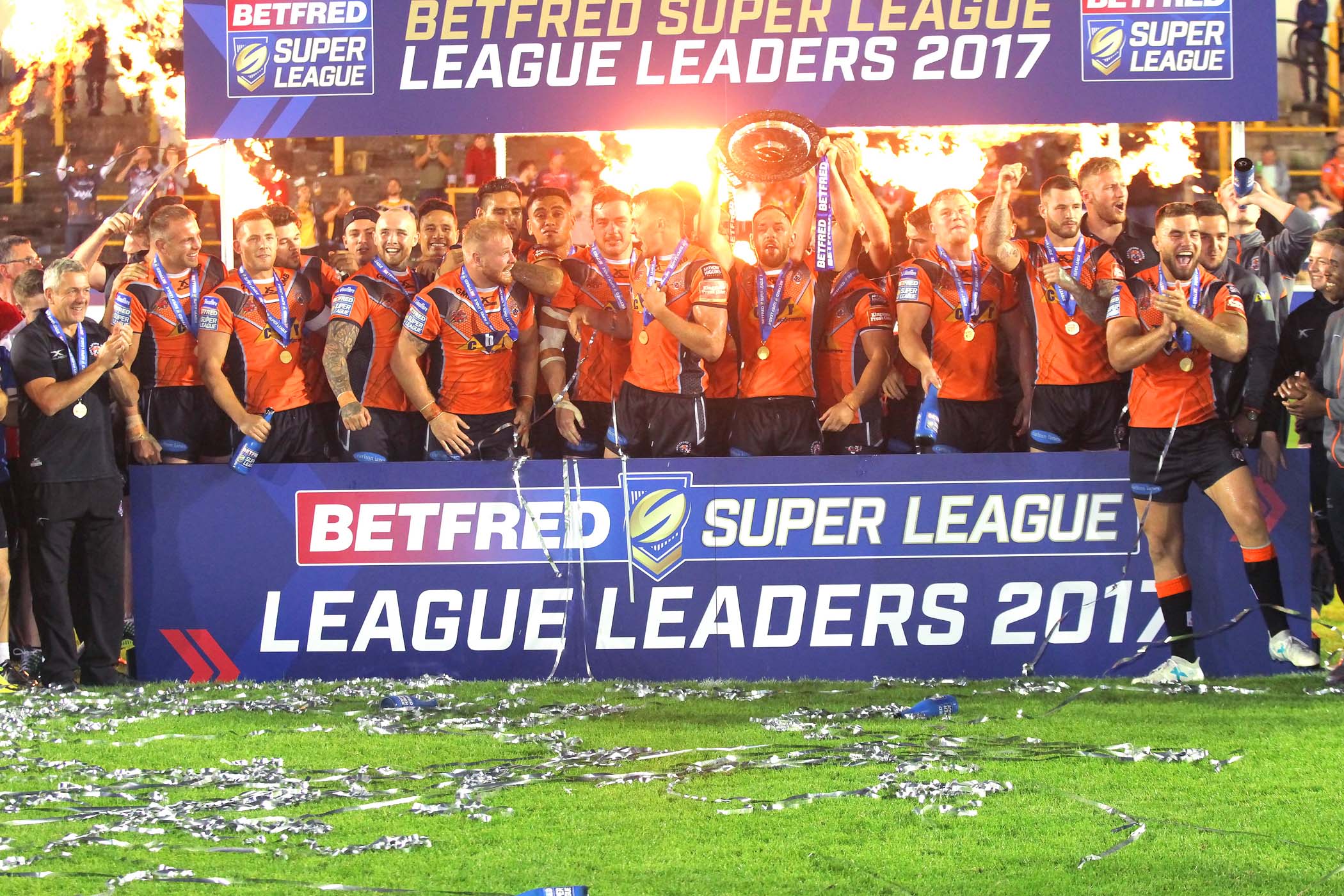 “Unfortunately, we didn’t get as much out of the season as we wanted to. We were the dominant team that season and we did so well, but of course it’s a fantastic experience.

On the Grand Final, he added, “It was awesome that it was my first Grand Final and to score. It was such a close game and it was that famous Rob Burrow try game. I finished that game with 15 minutes to go as I dislocated my elbow and had to come off and we ended up losing that game. So it was a great experience, but we didn’t get the result we wanted at the same time.”

“Coming so close is a motivator. When you’ve been so close before you know what it takes to do it. As a group, the majority of us have been together quite a while now so we know what it takes and we know the hard work that you’ve got to put in and the quality you’ve got to put onto the field and the grit you’ve got to have throughout the season to sustain it and stay at the top of your standards throughout the season. It is one hell of an achievement and that’s what you need to get to a Grand Final.”

Holding the Tigers’ record for most Super League appearances during a 15-year career that has seen him play over 300 games for Castleford and cross for more than a hundred tries, Shenton was granted a testimonial year in 2020 which will kick-start this weekend as his side face Toronto Wolfback at the Mend-A-Hose Jungle.

“When we were at negotiations to do this [play Toronto], we were hoping that it was going to be an exciting challenge” he said.

“We knew that Toronto were going to be in the market to sign some quality players and we sorted the weekend out and agreed that they would be our main trial match for the season.

“Daryl is focused on this one and it is our main trial match and he will try and play our strongest team that we’ve got available at the moment.

“To play against Toronto, they have a squad of 23 so they’ll play a strong squad, too. It’s going to be an exciting game and we’re all interested in what Toronto are going to bring. The majority of that team has been together for a while now and they’re going to be a challenge and going to be ready for it. They have players like Wilkin and [Joe] Mellor, who have plenty of Super League experience.

“I don’t think anybody will be surprised if Toronto do well this season.

On the idea of facing the biggest signing of the season in Sonny Bill Williams, Shenton added: “It’s going to be fantastic to see him out there.

“It’s great to see him in rugby league for a start, but to see him representing Super League should be something everyone should be excited about. It’s a massive name.

“You look at his Instagram and he’s having pictures with Manchester United players and they want pictures with him. He’s a genuine superstar of sport, not just in the rugby codes.

“He’s somebody we absolutely need to take advantage of. For me personally, it’s going to be a big moment to see him at Castleford and I don’t think he’ll have played at many places like the Jungle!”