Sergeant Carrie Roberts grew up loving all kinds of ball sports before going on to excel in both codes of rugby.

Roberts grew up in St Helens before joining the Army, where she took up playing rugby union and went on to represent the Army in rugby union all over the globe.

Roberts, who serves as a military training instructor in the Royal Electrical and Mechanical Engineers, will play rugby league for hometown club St Helens in the 2021 Women’s Super League and is involved in the England set-up ahead of this year’s World Cup.

She recalled her childhood: “There was a running joke in my family that I’d come back with a different shaped ball no matter where I’d been.

“I always had a ball so it wasn’t really rugby that interested me, it was just being out with the boys and playing any sort of ball sport.

“It was the ethos of the Army rugby union team that really made me think ‘I’m going to put a bit of effort into this because I really am enjoying it’.

“I’ve been to so many places with the rugby union team, I’ve been to Munich, France, Australia, New York, Fiji. It has given me so many opportunities.” 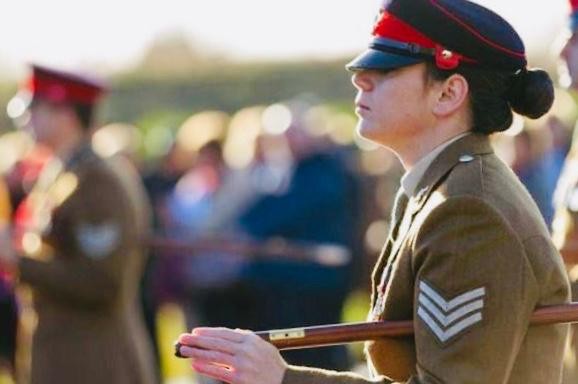 Roberts then started playing for the Army’s rugby league team and took to the 13-aside game like a duck to water, gaining her first international honours for England in 2015.

She continued: “I was fortunate enough to get selected for England that year and it was just a real honour, it was amazing and my childhood dream come true.

“From then on, I got posted down South and then deployed to Afghanistan so there wasn’t really much going on with the (league) programme after 2015 either so I went back to rugby union again but still kept in contact with the Army rugby league team.

“I always wanted to come back (to league) and when I saw the girls over in Papua New Guinea, I remember sitting with all the Army rugby league girls and we were watching the Nines in one of the RAF bases and we were all sat there up early in the morning before training cheering the England girls on and I thought ‘I just want a bit of that’.”

The outside back then caught the eye of England coach Craig Richards as she starred in the Army’s win over York to win the Challenge Shield in 2019.

Roberts is part of the Army’s elite sport programme, which means she can now dedicate herself full-time to England and St Helens ahead of this year’s World Cup.

She added: “At the moment I’m on the elite sports programme so I’ve been given the opportunity by the Army to come away and just focus solely on the World Cup, England and St Helens training which I really appreciate.

“Before that, I was a military training instructor so any recruits that join the Army – I basically take them through the military stage of things and get them through from basic training into the field force. I help turn them from civilians into soldiers.

“I can’t wait to get involved with the Women’s Super League. Just to pull that St Helens top on is going to be amazing. All of my friends and family are from St Helens, so it will be amazing to get all of them to come down and watch, pull that shirt on and do them proud.

“It’s something I’ve been really looking forward to during this lockdown. I can’t wait to get back on there and fingers crossed, I’ll get a starting shirt.”

About Drew Darbyshire 8026 Articles
Love Rugby League Deputy Editor. Joined the site ahead of the 2017 World Cup and been a full-time reporter since 2018.
Twitter