Matt Rodwell only played 10 games for Warrington – and it wasn’t a pleasant experience for him in England.

The Australian arrived at the Wolves in 2002 after making 178 appearances Down Under for Newcastle Knights, Western Reds, St George Illawarra Dragons and Penrith Panthers.

Rodwell signed a two-year deal at Warrington – but only lasted six months because of a shocking incident after a game.

He told the Our Town Our Team podcast: “They were calling for my head. Allan Langer was the previous half-back, whilst he didn’t set the world on fire, he was the great Allan Langer and I came in as the next Australian half-back to replace him.

“We’d been beaten at home and we had an after-match function. The chief executive came and saw me and said ‘Matt, there’s a mob out front. You’re best to go out the back’ and I said ‘bugger that. I’m going to hold my head high and walk through it’. Well what a poor mistake that was.

“I had my wife, my two young daughters and my mother-in-law and this mob was hurling abuse at me as we walked through.

“They followed us to the car in the car park. We got into the car and they started rocking the car back and forward as we started to drive out. It was horrendous.” 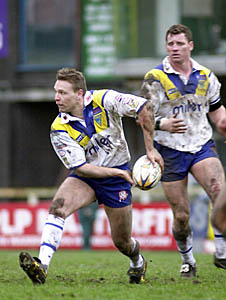 And the next day, Rodwell notified the club that he wanted to leave after his family’s shocking experience.

He added: “I walked in and saw the chief executive and new coach the next day and said; “that’s it. I’m done. I didn’t come here to experience that’.

“I said ‘I’ll give you two more games and then it’s best we sever ties and move on.

“I played the best two games I played for Warrington. I think I scored two tries in my last game.

“I don’t regret the experience. It was great to go out there and see what it is all about but it wasn’t the most memorable of times. I don’t look back on it too fondly but we went over there and it didn’t work out which happens from time to time.”