Pioneers of women’s international rugby league will be presented with their caps and heritage numbers at a special Life with the Lionesses event this week.

The recent World Cup highlighted the progress of the women’s game and was broadcast nationally to record-breaking figures.

It’s come a long way from the inaugural Great Britain women’s tour in 1996, where every player had to raise £1,000 to take part.

Life with the Lionesses

Life with the Lionesses is an ongoing heritage project which aims to raise awareness and celebrate the contribution of these pioneers, with an exhibition running at Pontefract Museum until August 2023.

Several players who represented either Great Britain or England will receive their accolades at a launch event this Wednesday.

Kelsey Morgan, from Wakefield, Sarah Fletcher, from Normanton and Leah Carey, from London will each receive their England Caps; and Nikki Harrison, from Halifax, and Sam Baily, from Rotherham, will receive their GB caps. Michaela Hirst also gets recognition for her role as a GB Coach.

Stories collected during the course of the Life with the Lionesses project, including those of Joanna Carr-Will, are being used as part of the exhibition which has toured to a total of 10 venues across the North of England during 2022.  They are also being shared on social media, as part of the Women in Rugby League archive at Heritage Quays at the University of Huddersfield and on a dedicated website.

A purpose to the sacrifices we made

Joanna played Rugby League for Great Britain in the inaugural 1996 tour to Australia and again in 1998.    She originally got into hockey and football in her teens but remembers being invited by a local nurse’s team to play rugby against them as a fundraiser.  When she joined a new ladies’ team at Featherstone (Wakefield Panthers) she was able to watch players like Brenda Dobek who really inspired her to get better.

In order for women to play rugby at international level back in 1996 every player had to raise £1,000 each.  At the time Joanne was working at Trebor Bassetts and they had a leadership award, which was a trip to Amsterdam.  She was determined to win and asked if they would donate the money instead towards her trip to Australia.

“We did bucket collections and raffles and anything we could think of to raise that money,” she said. “I was also working 12 hour shifts, but I don’t think we knew any different back then. 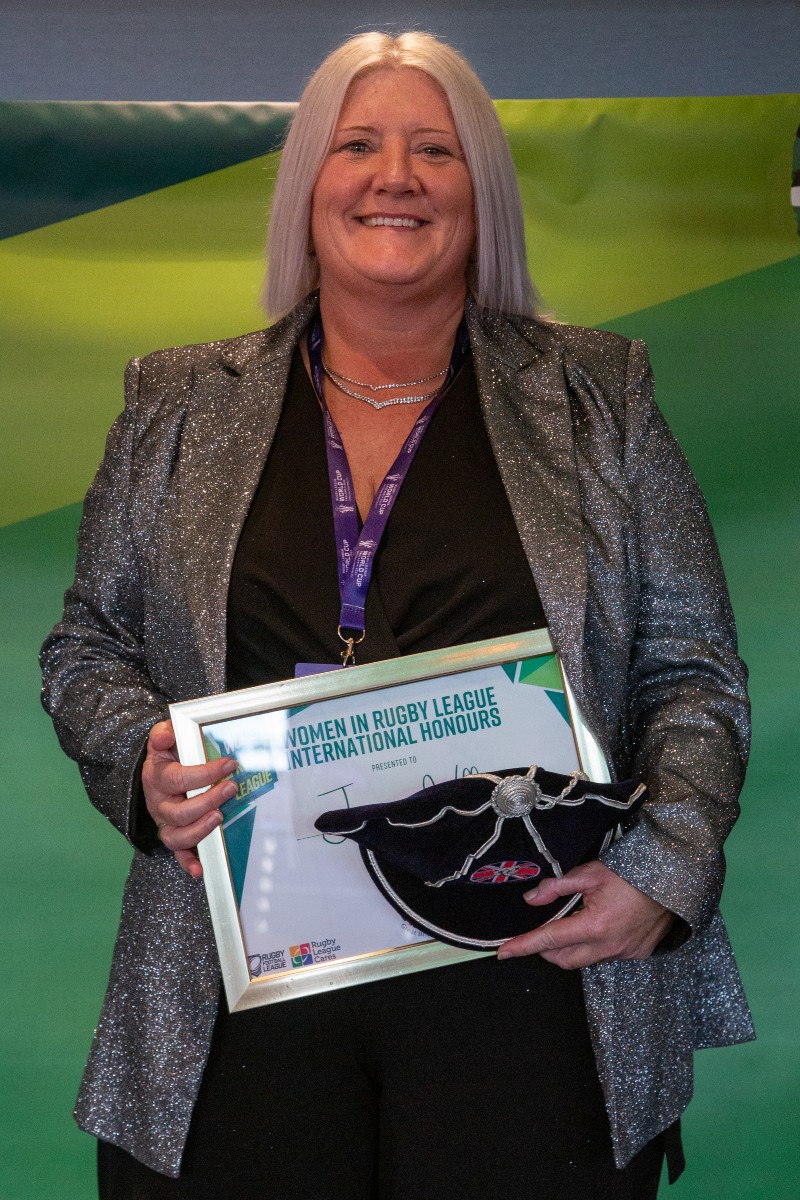 “We had club training twice a week and a game on a Sunday.  We trained all day on the Saturday with the Great Britain squad.  To fit that into your working week was really quite difficult.  But we tried to make it as much fun as possible.

“Up until a couple of months before we went to Australia we didn’t even know if we were going, even though we’d been training and fundraising for a whole year.

“Finally being awarded our caps and heritage numbers this year makes me feel as if there was a purpose to all the sacrifices we made.”

The Life with the Lionesses exhibition showcases the personal journeys of all the women pioneers of international Rugby League.  Visitors will be able to follow their groundbreaking journey on and off the field and see their stories and experiences brought to life, from fundraising their own tour to playing on an equal stage with their male counterparts in this year’s World Cup.  They will also hear from the women themselves.

The Life with the Lionesses project has been led by Julia Lee from Huddersfield.  It has engaged with the wider community, both inside and outside of Rugby League, in order to deliver a programme of activities that celebrate the history of the women’s game.  In addition, it has showcased the achievements of women involved in Rugby League and used the stories of rugby’s women pioneers to inspire new generations.

Julia, who has spent many years working to get the role of women in Rugby League recognised, said: “We are delighted to have been offered a platform for our exhibition in Pontefract.  Women had to work so hard to get recognition for their achievements in Rugby League and we are keen to tell their stories to a wider public.

“Now that there is a Women’s Rugby League Hall of fame, it’s even more important to get the message out there and celebrate those early trailblazers.”

READ NEXT: Who is Julia Lee? A rugby league pioneer