Leigh survived a late Widnes fightback to pick up an enthralling 36-22 victory in the final game of the 2019 Summer Bash.

Having led 30-6 inside the second half, the Centurions allowed the Vikings back into the game courtesy of three tries in quick succession.

Nevertheless, Gregg McNally continued his excellent scoring form at Bloomfield Road to confirm victory for John Duffy’s side and take them into the top four.

The two sides traded penalties inside the first 15 minutes before Owen Buckley broke the try-scoring deadlock, the winger given far too much space to collect Tom Gilmore’s cross-field kick and stroll over in the corner.

Leigh hit back seven minutes later as Toby Adamson – who was lucky to avoid punishment for an alleged elbow in the tackle earlier in the game – crashed onto a Josh Woods flat pass close to the line.

They stretched their advantage as Liam Hood somehow squeezed the ball out to Gregg McNally to touch the ball down in the corner.

In what could prove to be the final game of his loan spell at Leigh, Ryan Brierley collected Woods’ grubber kick to touch down to the left of the posts, making it 18-6.

Martin Ridyard pushed the Centurions’ lead beyond the two-try mark with a penalty early in the second half, before Brierley was on-hand to support Iain Thornley’s rampaging break down the left to give his side some breathing space.

Former Warrington man James Laithwaite was the next to cross in what was somewhat of a purple patch for Leigh, the 27-year-old bagging his second try of the season after grounding the ball under pressure.

Danny Craven sparked Widnes’ revival as he stepped past Laithwaite to cross under the sticks on his 150th career appearance, while Lloyd Roby capitalised on some lazy goal-line defence to cross four minutes later.

Craven scored his second – and Widnes’ third in 10 minutes – as he supported Sam Wilde’s break and ran straight through Josh Simm to touch down, but McNally extinguished any hopes of a comeback as he crossed late on in the corner to secure his second try.

Play-off dreams all-but over for Widnes?

When Widnes came out of administration and faced the prospect of a 12-point deduction, they knew they couldn’t afford more than three or four defeats if they had any hopes of still achieving their top five ambitions.

Today’s loss was their fourth in the league since returning to action against Featherstone at the beginning of March, the other three coming against Batley, York and Dewsbury.

The way in which they clawed their way back into the game must be admired – they certainly had Leigh worried for a period of time in the second half – but eventually time got the better of them.

You wonder whether this evening’s result ends Widnes’ pursuit of the top five, given the gap between themselves and fifth-placed York now stands at 14 points with 13 rounds to go.

Leigh Centurions certainly merited their first-half superiority over the Vikings. They used their experience to good use, varied their last tackle plays and gave Keiron Purtill’s inexperienced side a thorough examination.

However, their first try scorer, Toby Adamson, arguably shouldn’t have been on the field by the time he crossed for the Leythers.

The 28-year-old needlessly thrust his elbow into the jaw of Ted Chapelhow in the tackle, causing tempers to flare from both sides. Thankfully for the Centurion, the incident was only put on report by Greg Dolan, who didn’t seem to have a clear view of what happened.

Nevertheless, Adamson could see himself missing the next couple of Leigh games if his misdemeanour is cited by the match review panel.

Man of the Match – Ryan Brierley 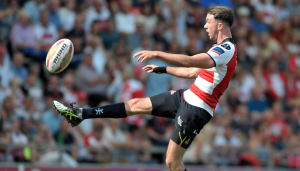 If this does prove to be Brierley’s last game in a Leigh jersey, he certainly went out on a high.

His enthusiasm and speed around the ruck was reminiscent of his first spell at the club, while his combination with the supremely talented Josh Woods really was a joy to watch.

You’d expect Leigh would be doing everything in their power to retain the services of the exciting half-back, and with Toronto seemingly covered in that department, Brierley could very well return to Leigh Sports Village sooner rather than later.

What a way to round off what has been a spectacular week of rugby league, both in the north-west of England and over in Barcelona.

Leigh should’ve had the game wrapped up with a 24-point advantage, but full credit to Widnes’ crop of young and hungry players; they demonstrated a never-say-die attitude and were close to pulling off what would’ve been the turnaround of the weekend.

The Centurions seem to have found the formula for success in Woods and Brierley, but whether they will appear together again is a matter for another day. For now, the Leythers can bask in the glory of a scintillating victory over one of their big Championship rivals.