Leigh have signed experienced forward Joel Tomkins from Catalans for 2022.

The 34-year-old has made more than 300 career appearances for Wigan, Hull KR and Catalans.

Tomkins is dual-code international for England, having spent three years in rugby union with Saracens between 2011-14.

Leigh caretaker coach Kurt Haggerty said: “The signing of Joel is a statement of intent from the club. He’s a proven winner and is still playing at the highest level in Super League.

“Joel brings experience, a winning mentality and leadership qualities. This is a brilliant signing for the club.”

Tomkins said: “It will be with a heavy heart when I leave Catalans. I’ve built up some great relationships over here and I owe a lot to the coach, Steve McNamara and owner Bernard Guasch.

“Steve was the main reason I signed after leaving Hull KR. He is one of the genuine good guys and though he was keen for me to stay I explained my reasons for leaving and he was very supportive.

“A few other clubs had shown an interest in me signing for next season, but I planned on making a decision at the end of the season. The Leigh offer came a bit out of the blue for me but once I’d heard about the club’s plans and ambitions, I was really excited.

“I’ve played with quite a few of the Leigh players, Lewis Tierney, Joe Mellor, Ben Flower to name three and I’m really excited to be working again with PJ (head of performance Paul Johnson).

“I’m excited to get involved and see how far we can go. With my age and experience I believe I can add a lot to the group and when I do leave the club, I want to have left a legacy that I helped them become an established Super League club for years to come.

“When I do retire, I want to be able to look back at my time at Leigh with pride, to have had a big impact and to have helped an up and coming club reward Derek’s (Beaumont) passion and vision and become a sustainable, long-term club within Super League.” 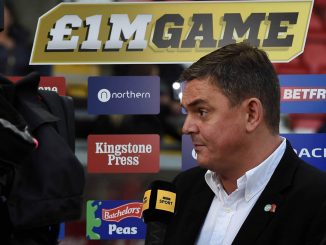