Leeds picked up their second win of the Betfred Super League season after coming from behind to battle past last year’s beaten Grand Finalists Salford and win 22-8 at the AJ Bell Stadium.

Tries either side of half-time from Luke Gale and Luke Briscoe swung the game decisively in favour of Richard Agar’s men after Salford had dominated the first half but only registered two unconverted tries in difficult conditions.

It was a particularly sweet return to Salford for Leeds stand-off Robert Lui, making his 100th Super League appearance against his old club. The former North Queensland Cowboy, who turns 30 on Sunday, was playing at the AJ Bell Stadium for the first time since leaving Salford last year. 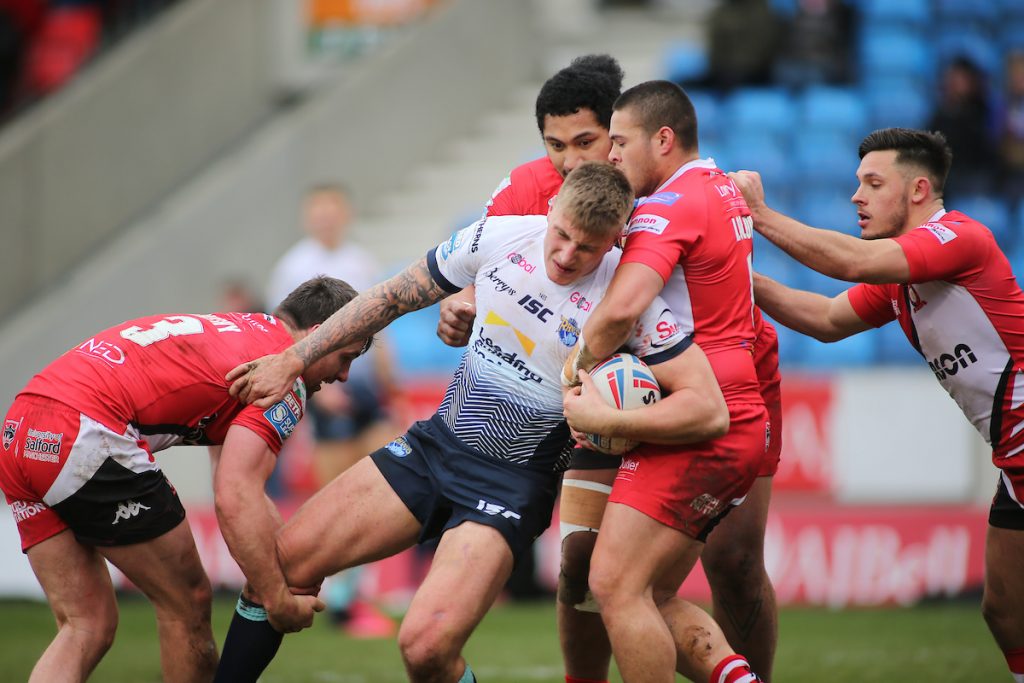 Lui’s kick and chase in the 10th minute was to prove a rare moment of Leeds danger as Salford started to enjoy the lion’s share of possession. With 20 minutes played, Red Devils full-back Niall Evalds burst clear and scored in the corner from 15 metres. Tui Lolehea was unable to add the conversion against his former club.

Salford scored a second try soon after. Lolohea received the ball 12 metres from the Leeds tryline on the last tackle and he proved unstoppable on an angled run to the corner. Chris Atkin was unable to add the conversion but Salford were good value for their 8-0 lead.

Having been largely toothless with ball in hand, Leeds crafted a response on the stroke of half-time. Brad Dwyer made a break through the middle of the Salford defence and his inside pass found Gale who finished off under the posts. Gale also added the conversion to leave Leeds only two behind at the break.

A booming 40-20 kick from Joey Lussick early in the second half looked to have given Salford an attacking platform but they were unable to capitalise and instead it was Leeds who got the half’s first points after 51 minutes.

Some sharp approach play on the right edge saw Richie Myler and Lui combine to give Harry Newman some space and he fed Briscoe who acrobatically finished off in the corner to give Leeds the lead for the first time in the game though Gale was unable to convert.

The visitors continued to build pressure on the Salford tryline and with 55 minutes played, Mikolaj Oledzki took a short pass to power his way over from close range. Gale added the conversion along with a penalty four minutes later for interference at the play-the-ball to make it 18-8 for the Rhinos.

On an increasingly heavy pitch, a 10 point lead looked too great for Salford to recoup and in their desperation to keep the ball alive were stung 10 minutes from time when Konrad Hurrell broke clear, creating space for full-back Jack Walker to race to the corner for a try which Gale could not convert.