Jordan Flovie scored five tries to help Lezignan remain top of the French Elite 1 Championship after winning all seven of their games so far.

Their latest victory was a hard-fought 34-24 triumph over Albi.

That turned in to a 16-6 advantage at the break and Lezignan’s hopes of a comeback were dented when they lost Jean-Baptiste Bousquet to a sin-bin early in the second half.

Albi stretched their lead to 24-10 but were left shell-shocked by a late Lezignan fightback.

A contested Jordan Flovie try got the hosts back in the game and Bousquet scored from the kick-off to drag them back within four.

Flovie’s fourth try was then converted by James Maloney to put Lezignan ahead for the first time and they never looked back, Flovie adding a fifth late on.

A handful of players on the fringes of the Catalans Dragons first team helped inspire St Esteve to a 52-0 victory over St Gaudens.

Highly-rated young half-back Cesar Rouge was joined by Corentin Le Cam and Romain Franco in a simple victory which lifts the Dragons into sixth place.

Rouge set up the game’s first try for Le Cam, who turned provider himself in setting up Paul Marty for a second.

Rouge got a try of his own and then had a hand in the fourth for Corentin Rey.

Rey added his second with Kuni Minga in the sinbin for the hosts and St Esteve led 28-0 at half-time.

Further tries for Adrian Salies (2), Robin Brochon and Franco followed in the second half.

Elsewhere, Villeneuve caused an upset by beating Limoux 22-12 to close the gap on the top three.

Meanwhile, the press in France are reporting that Catalans Dragons have agreed a new broadcast deal with beIN Sports.

The Dragons will pay for the production costs to enable their games to be shown live.

beIN Sports have been the previous broadcasters of Dragons games, providing the feed to Sky Sports in the UK. 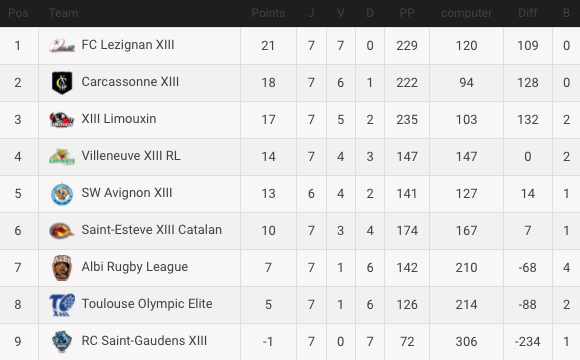 French round-up in partnership with TriezeMondial.fr