Halifax reached their first Challenge Cup semi-final in 31 years with a tight 20-16 victory over Bradford at Odsal.

In an entertaining clash between two of the most evenly-matched sides in the second tier, Halifax edged themselves ahead with less than five minutes to go thanks to a superb solo score from James Woodburn-Hall, and although the hosts tried everything to get themselves a late try, they could not find a way through Fax’s sturdy defensive line.

The result means that Simon Grix’s outfit can plan for a weekend in Bolton, with the semi-finals set to be played as part of a triple-header alongside the Women’s Challenge Cup Final on Saturday 27 July.

The game started in a cagey manner, not too dissimilar to their meeting at the Summer Bash two weeks ago.

Both sides played the percentages early on, before Bradford hit the front eight minutes in. David Foggin-Johnston did superbly to break away down the left before throwing it inside to Rowan Milnes, who dived over in the corner.

Fax were temporarily reduced to 12 men shortly after as Adam Tangata was sent to the sin-bin for a late shot on Jordan Lilley, but the Bulls were unable to capitalise on their numerical advantage.

Nevertheless, they did extend their lead two minutes before half-time as Lilley slotted over a penalty goal in-front of the posts.

Shortly after the restart, Halifax hit the front courtesy of an eight-point try, awarded after Jake Webster impeded Steve Tyrer as he attempted to ground Scott Murrell’s pinpoint crossfield kick.

Nevertheless, John Kear’s side edged themselves 12-8 ahead courtesy of Webster, who atoned for his earlier error by forcing a knock-on from Scott Grix on his own line, before pouncing on the loose ball to score.

Grix was on-hand to support Quentin Laulu-Togaga’e’s half-break to give Fax the lead once again, but their advantage lasted just four minutes as Matty Wildie picked up Kevin Larroyer’s knock-on and outpaced the retreating defence to cross from 35m out.

With the game entering the final five minutes, Woodburn-Hall took the game by the scruff of the neck to claim the match-winning try. Halifax threw the ball quickly left and the substitute – who had been on the field for less than a quarter of the contest – dummied his way through the defensive line before bamboozling Ethan Ryan with his feign of pass to stroll in under the posts.

Sensational game for the neutral

This afternoon’s meeting proved to be a thoroughly enjoyable watch as both sides fought tooth-and-nail to be the first second-tier side to reach the semi-finals since 2006.

After a typically tight opening, it was clear that neither side would be able to do enough to warrant a big advantage at any stage, with an individual brilliance always looking the most likely way of unlocking either defence.

Although individual mistakes from Scott Grix and Larroyer looked to have gifted Bradford a place in the last four, Woodburn-Hall stepped up when it mattered.

When any rugby league game is on free-to-air TV, we always want to be treated to a spectacle. It may not have had the highest-profile names out on the pitch, but the titanic battle between two physical outfits was without doubt the standout game of the weekend.

The clash between these two sides was almost uncanny when compared to their meeting at Bloomfield Road a fortnight ago. Fax came out on top on that occasion, and once again, they were made to work extremely hard to pick up the win.

It is hard to distinguish between the two teams based on their past two meetings. Both boast muscular forward packs and pacy backlines, while the influence of Murrell and Lilley in the halves is clear to see.

Both sides will be hoping the efforts they exerted this afternoon will not impede them going forward in the league. It must be remembered that John Kear’s side lost consecutive games following their mammoth effort against Leeds in the previous round.

Fax and Bradford are just two points adrift of the top five and among a cluster of teams still in with a chance of reaching the end-of-season play-offs. Whether or not reaching the next round of domestic cup competition will impact Simon Grix’s side in the coming weeks will remain to be seen. 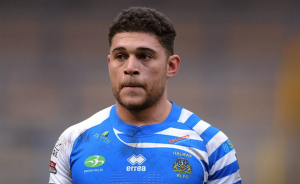 He wasn’t on the pitch for that long, but Woodburn-Hall certainly made his presence felt to help Fax reach the last four in mesmerising fashion.

Having produced a brilliant offload in the build-up to Scott Grix’s try within minutes of coming on, the former London Broncos back went one better, single-handedly jinking his way through the line to clinch the game when it was perfectly balanced.

He had to bide his time on the bench, but when he finally got a chance to show what he could do, the 24-year-old did his upmost to get his name up in lights.