Cumbrian Shaun Lunt has played more than 300 games, peaking with Super League glory at Leeds in 2012, while also winning the 2013 League Leaders’ Shield and appearing in three Challenge Cup finals.

Now in the twilight of his career, he stepped down to part-time rugby with Batley at the end of last season and will move on to Barrow for 2021.

The path he’s been on – forging a successful career from beyond the M62 heartlands – has made him passionate about growing the game and he believes that the focus on Super League is harming that development.

Lunt said: “The biggest bee in my bonnet about the game is that all we seem to care about is Super League, the highest level. But if we don’t have any foundations, it’s built on sand and it’s going to collapse.

“We’re neglecting amateur and grass roots rugby when we should be focusing on that. Yes, we might have to take one step back for three steps forward, whereas it seems we take on step forward and three steps back at the moment. We’re not looking at the bigger picture.

“Let’s look at the foundations and then we’ll create a conveyor belt of talent. Look at Australia. They have five or six world class players in each position, and then others coming through. If we lose one or two, who have we got?

“There’s no depth in our game, no players are coming through. Clubs are bringing in overseas players on more money and the youngsters are falling out of the game.”

Lunt is doing his bit for the player pool, having launched his venture HQ9 last year. It’s a profiling network, aimed at players who would otherwise slip through the net from a scouting perspective. He says it is not about becoming a player agent, but instead about creating opportunities.

As well as giving something back to the game, it’s also something driven by his own experiences as a young player.

He said: “What I have found is people are shy in coming forward. I made a DVD when I was at Workington, I was very pro-active. Whereas people care about what people think and are embarrassed about putting themselves out there, the fear that if it got out that they would be ashamed.

“My message to them players is to have a dig, stop waiting for things and make it happen.

“I heard Huddersfield needed a nine, I made a DVD and sent it to them. I was up in Cumbria for three seasons, I got young player of the year twice, and got 17 tries in 18 games and was playing really well, but no one was offering me a contract. 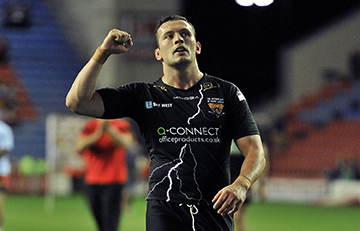 “I knew I had to force my way in to it. The rest is history. A year later I was playing at Wembley and on the verge of playing for England.

“I’ve gone on to do a lot of things and been really lucky. That wouldn’t have happened if I’d cared that people thought or if I didn’t put myself out there. Don’t be scared.

“Some players if they’ve not made it by 17/18/19, they go and do other stuff or go down the wrong path or choose careers elsewhere. I didn’t make my full time debut until I was 21. We all develop at a different rate.

“I’ve had a few players come to me about playing in France, they’ve come and asked me a question and they’re just sat there waiting, when they should just go out there and go forward, stop waiting for people to come to you.”

The last few years have been tough for Lunt. Suffering relegation with Hull KR was tempered by an immediate promotion, but he faced a personal battle of his own, after being diagnosed with sepsis, a life-threatening blood condition, which developed following a tackle that cause an abscess in his spine that became infected.

The enforced shutdown of rugby league due to the coronavirus pandemic has brought some positives, though.

“The break has almost been the best thing that’s ever happened to me! It’s been a tough couple of years and it’s been really challenging at times. This way, I can gather my thoughts and go again.”