There were big winning margins in four of the five games in the Elite Championship at the weekend.

In the closest game, Avignon recorded a 20-16 win over Limoux to drag them close to the top four as their resurgence continues.

Limoux got on the board before Gigot added a second drop goal. Zachary Santo’s converted try made it 20-12 before Alain Torreilles opted to take a penalty to reduce arrears to one score.

The Grizzlies then decided to take a further penalty to bring things back to 20-16, but Avignon held on to win.

The Bisons are now just a point behind Limoux, who are a further three points behind third place Lezignan, who coasted past Toulouse 42-12.

Carcassonne remain top, having won 10 out of 11 games so far this season, beating Palau 46-16, with St Esteve a point behind them and a point ahead of Lezignan after their 40-20 win away at St Gaudens.

Villeneuve bounced back from a couple of defeats with a comfortable 42-16 win over Albi.

Former England international and Man of Steel Rangi Chase considered moving to France, before opting to join League 1 side West Wales Raiders. Chase, now 34, said: “I was looking for a change. I wanted to get out of Yorkshire because I’d been around there so long. I was getting a bit stagnant and I needed a new challenge. I was either going to France or Wales. I got speaking to Aaron – I played against him in my younger days – and then the club sold it to me.”

The Elite 2 Championship will not resume for the 2020/21 season, it has been confirmed. The competition has been paused since before Christmas, and barely a handful of games had been played. Under 19s and amateur championships have also been cancelled. The next Elite 2 Championship season could start in October. 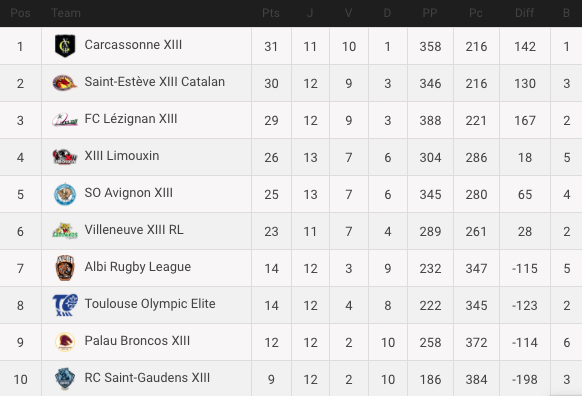